The headline feature of the Watson Duo Charger is that it has swappable charging plates that make it compatible with a very wide range of camera batteries. 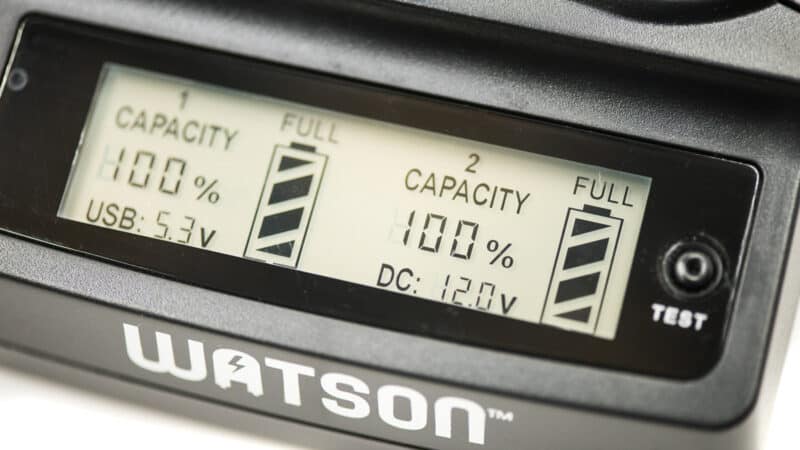 Keeping digital cameras charged can be a challenge, especially when traveling. Some digital cameras are better than others when it comes to battery life, but sooner or later all of them need charging. An unlike back in the manual film days, without power, the camera simply won’t work at all.

So I end up trying out a lot of different solutions for battery charging. On one end of the spectrum are the battery chargers produced by the camera manufacturers and often included with the camera. They’re safe and reliable options, but they’re rarely innovative and tend to be bare-bones affairs. On the other end are ones that boast different features, like the ability to charge multiple batteries at once, having more precise charging status feedback, and being able to charge with power sources other than AC.

Several years ago I came across the Pearstone dual chargers. I liked it and was using it regularly, but mine got crushed while traveling—an occupational hazard—so it’s been a while since I’ve used one. It turns out that in the meantime the chargers have been moved under the Watson brand (the Pearstone brand now focuses on cables). B&H Photo sent me one of the newer Watson Duo Chargers to test out.

Aside from the rebranding, it’s basically the same as the model I’d been using previously. The Watson Duo Charger is a modular charging platform for camera batteries. The base has room for two batteries, which you can charge simultaneously or one at a time. It also has a large LCD screen that provides precise progress on charging and battery health. I like that approach much more than a single flashing LED light that the manufacturers’ chargers usually use.

But the headline feature of the Watson Duo Chargers is that they use a modular charging plate system. That is, you can mix and match the charging plates to suit whatever type of battery you happen to be using. The ones I’m using at the moment are for Nikon’s EN-EL15 batteries, but there’s an extensive range of over 100 different plates available covering a very wide range of compatible batteries.

The beauty of this system is that you can mix and match the battery plates. If you need two of the same, no problem. If you want one of each, knock yourself out—the charger will make sure that each battery gets only the amount of charge that it needs. And if you’re using more than two types of batteries, you don’t need to lug around a bunch of different AC chargers. You can take some of the very small and very lightweight adapter plates instead. And, even better still, the plates are only a couple dollars each.

As far as power sources go, it works with AC (cable included) or DC (cable and adapter included).

It has a USB socket as well, but that’s only for output—say, if you want to charge something else by USB at the same time. But it also means that you could conceivably charge three batteries simultaneously if you connect the camera via the USB port and charge its battery in the camera.

There are, however, a couple areas where it could be even better.

For one, it feels larger than it needs to be. Maybe it’s all necessary for cooling, but when you pick it up it feels like there’s a lot of empty space inside. If you’re only using it in a studio or at home, that’s not a problem. But if you’re packing light for traveling, it’s quite bulky. It’s a shame, because the opportunity to take advantage of the modular plate system is very appealing. This gives you a sense of its size, side-by-side with Nikon’s own charger for EN-EL15 batteries (a single charger, it should be noted).

But it is worth noting that Watson also has a more compact, single-battery charger system that also works with the interchangeable plates (but doesn’t have the LCD screen). You can find an example here.

For another, it’s a shame it won’t charge by USB input so that you could use a powerbank or USB AC adapter. Of course, that might not provide enough of the right kind of power under the current configuration, but there are other dual chargers available that show it can be done, like these or this one.

There’s also no on/off switch, so if you leave it plugged in, it’s on constantly (although the charging cuts off when the battery is full).

It’s a switching charger in two senses. For input, it’ll automatically switch between 110V and 240V, which is useful for traveling. And it automatically detects the correct charging rate for different batteries and switches automatically for those.

There’s a test button to check the health of your battery. You can do this without plugging the charger into AC power.

It comes with a one-year limited warranty.

The killer feature of the Watson Duo Charger is that it has interchangeable charging plates that can make the charger compatible with a very large number of camera batteries. That flexibility and broad compatibility is something quite unique and not something I’ve seen on other batteries.

I also like its other main features—the LED screen that shows detailed charging status and battery health as well as the fact that it can charge two batteries at once.

Put them all together, and it’s a great combination even if I can think of a few things that I think could make it even better.

You can find them at B&H Photo for $79.95 for the base and two charging plates. It’s available in a wide choice of configurations, so make sure you’re choosing the version with the plates that are compatible with your batteries.

You can also buy the plates individually for $1.99 each. It’s fine to mix and match plates.

1 thought on “A Modular System for Charging Camera Batteries”