Finding and Cleaning Unused Images in the Wordpress Media Library 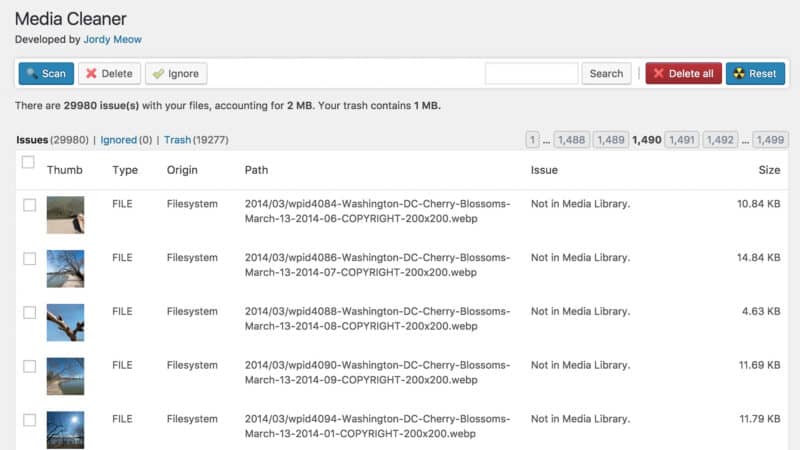 I converted this site to Wordpress in 2009. Since then, Wordpress has gone through a lot of changes. As has the site. Sections on some topics have been peeled off to their own sites. Some were later merged back in. It’s been moved several times to new hosts. And many thousands of images have been added and new thumbnail sizes incorporated as I’ve upgraded themes.

In short, the Media Library had become a bit of a mess. And all that extra bloat meant using more disk space and slower site backups.

So I’ve been doing some spring cleaning. For the Media Library I’ve been using the Media Cleaner plugin by Jordy Meow. Probably his best-known plugin is the WP Retina 2x plugin, which serves high-density Retina images to the new generation of displays that can use them. I’ve also written about his Lightroom to Wordpress publish service plugin.

Media Cleaner has two operations it can do, and you can run each independently. Please note that both of these have the potentially to really screw up your site, so it’s one of those plugins that should be used with a lot of caution. Making a full backup is an essential first step.

Scan Your Uploads Folder for Files Not in the Media Library. The second is to scan your uploads folder on the filesystem for images that don’t appear in your Media Library. To access this function you need to buy a license for the Pro version. Pricing is based on the number of websites, and you can make a once-off payment or subscribe annually.

It’s straightforward to use once you’ve installed and activated it just like any other plugin. Firstly, you set the options you want by going to Settings > Media Cleaner.

You actually run the scan and do all of the deleting, etc, by going to Media > Cleaner.

Once you get the results, which come out like the screenshot at the top of this page, you can select what to do on a file-by-file basis or globally. Any files you delete go into the Trash as a safety precaution. You can then empty the trash if you want to delete them permanently.

And it’s worth including the developer’s in-depth warning panel here to emphasize the point that it should be used with caution.

Does it Work with Multisite?

The developer hasn’t fully tested it with multisite, but I’ve been using it without issues on my multisite install. Your mileage might vary—again, use with caution.

What if you want to do the reverse? That is, what if there are in images in your uploads folder that aren’t showing up in Wordpress’s Media Library but you want them to? A common reason this comes up is if you’ve uploaded files via FTP, perhaps when moving a site between hosts. Sometimes the images can become unregistered from the Media Library.

There’s a separate plugin that can handle this: Media from FTP.

Basically, it scans your uploads folder, finds files that aren’t registered in the Media Library, and asks if you want to add them. There are various options for filtering and even modifying things like the file’s date and time.

I’ve had mixed success with it, which isn’t the fault of the plugin but because there are several different ways things can become messed up in the first place, and there’s only so much a plugin can do to fix every possible cause. But when it works, it’s saved me an enormous amount of time and effort, so it’s definitely worth taking a look at.

Finding and Cleaning Unused Images in the Wordpress Media Library