6 of the Best Wordpress Plugins for Photographers

Wordpress is a great platform out of the box. Here are some plugins that make it even better for photographers’ websites. 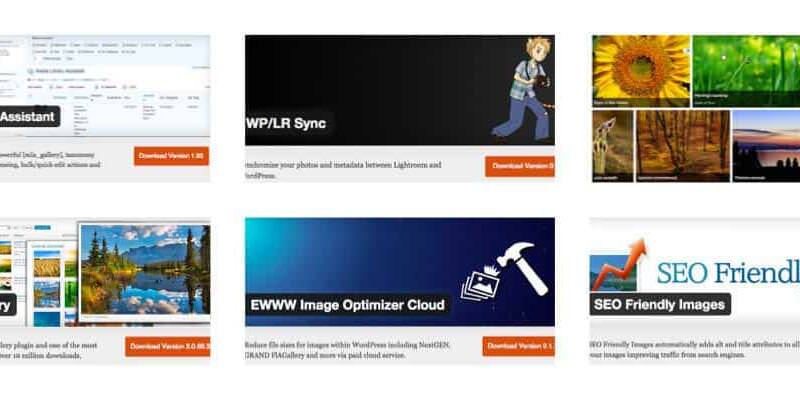 Photographers’ websites naturally feature a lot of images. But using a lot of images comes with its own sets of challenges, from organization to captions, to making sure that large images don’t bring page load speeds to a grinding halt.

There are oodles of gallery and lightbox plugins for Wordpress that make showing off your photos much more visually appealing. But there are also plugins that work under the hood to offer powerful tools for photographers who use Wordpress for their websites. Here are some of my favorites.

This is one of those plugins that every Wordpress site that display images should use. In short, it makes your image file sizes smaller, which results in pages loading faster. And faster websites mean happier visitors, lower bandwidth costs, and SEO benefits. WP Smush.It has been around for a long time as a basic alternative, but I’ve found it to be less than reliable. I much prefer the new cloud version of EWWW Image Optimizer.

With EWWWIO you can control how aggressive the optimizations, from completely lossless or employing the excellent but lossy compression algorithms of JPEGmini. There are two versions of this plugin. The cloud version is the one to use if your web host limits some of the scripts on which EWWWIO depends. If you have more control over your server and are willing to get your hands dirty with setup, there’s also a version you can run on your own server.

The Cloud version requires a very reasonably priced monthly (or annual) subscription based on how many images you optimize per month.

I have a more detailed write-up on EWWWIO Cloud here.

Media Library Assistant enhances Wordpress’s native media library by adding several features that are especially handy for photographers. Among the most useful of the features is the ability to ingest IPTC and EXIF information from photos as they’re uploaded. You can then use that information in captions or in other ways.

If you’re using Lightroom to organize and process your images, you can send your images directly from Lightroom to Wordpress. There are two main plugins to do this. One, LR/Blog, acts as an export function with some pretty powerful features built-in.

The other, WP/LR Sync, is one of my new favorite plugins. It uses Lightroom’s Publish Service function to allow synchronization between Wordpress and Lightroom, meaning you can make updates to the develop settings or metadata in Lightroom and have those reflected in the version of the image on your website. There are two parts to installing it: activating a plugin through Wordpress and adding a plugin in Lightroom.

I have a more detailed write-up on WP/LR Sync and another on LR/Blog.

In an ideal world, we all have time to manually add ALT text for each image we upload. ALT tags do matter, both for their originally-intended use of aiding screen readers as well as having some role in SEO, but writing custom ALT tags individually isn’t top of my list of ways to spend my time.

This plugin automates the process, meaning that your site won’t commit the entirely avoidable sin of having blank ALT tags. You can use tokens to control the output. Then it just works silently in the background so you can forget about it.

I have a more detailed write-up on SEO Friendly Images here.

Wordpress’s built-in image gallery is fine. Not great, not awful–just fine. But if you care about showing off your images you’ll probably want something with a bit more oomph. And, ideally, it should not only look good but also give you useful tools for editing and organizing photos under the hood.

NextGEN Gallery has established itself as the most popular gallery plugin for Wordpress. From thumbnail galleries to imagebrowser galleries to adding watermarks, it does a lot things to make displaying photos on Wordpress much better.

This one isn’t for everyone, mainly because it’s a package of a whole bunch of plugins, many of which you probably won’t use. So it’s pretty easy to make the argument that it’s bloatware. But if you find enough of the features useful, it can be a convenient addition. Jetpack is created by the same people who run Wordpress.com for hosted Wordpress sites and is designed to make available to self-hosted Wordpress sites the plugins that are available to Wordpress.com users.

The package is constantly being added to–which might be a good thing or you might consider not so good–but there are two features that are especially useful to photographers. One is Photon, which is a basic CDN for your images. A CDN, or content distribution network, is designed to speed up how quickly your users see pages load by distributing parts of the data to servers closer to their physical location. There are all sorts of good options for setting up your own CDN, but all of them require some time and effort (and usually, cost) to set them up. The virtues of Photon are that it’s free and easy and works quite well.

The other feature I like for photographers is Tiled Galleries. It’s a much slicker way to display thumbnail galleries than the native Wordpress gallery display. There’s also a Carousel display feature, which some people like.

In addition, there are a bunch of generalized features that cane come in handy. Markdown and Widget Visibility are some I use regularly. Many of the features can be installed separately, so it’s really a matter of convenience whether to use them through Jetpack.

Jetpack itself is free. A handful of the features require paid subscriptions.

This one isn’t specific to photography sites. This is one of the first plugins I add for every site I create. It’s incredibly powerful, but even with a default setup it can make a very big difference on your site’s speed. The short version is it adds caching to your site. How it does that area all sorts of complicated (but thankfully isn’t complicated to use with standard settings).

It’s free, with the option of paying for advanced support and configuration.

Again, this one isn’t specific to photography sites, and I install it with every site I create. If you want people to be able to find your site through search engines, install this plugin. By itself, it won’t magically make you rank number 1 on search pages, but it’s a very big step in the right direction.

I often get people asking about my site. So here’s the short version . . . It’s built on Wordpress and uses the Genesis framework with a customized version of the Metro Pro child theme. It’s hosted on the dedicated Wordpress hosting of Synthesis. The font used in the headings is Anodyne by Yellow Design Studio.

6 of the Best Wordpress Plugins for Photographers