WP Smush Pro builds on the oldest of the cloud image optimization services. Here’s how the reborn version stacks up. 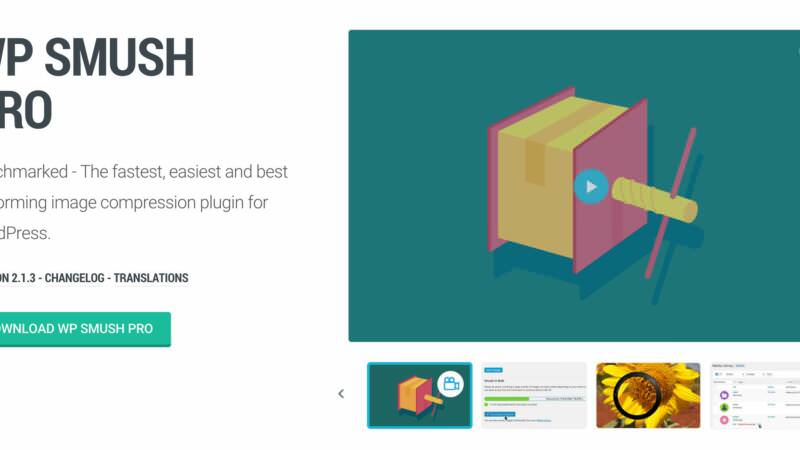 Optimizing your site’s images is a very effective, easy, and relatively inexpensive (or can be) way to speed up your site, often dramatically. Image files tend to be bloated with data that isn’t needed, whether that’s unnecessary metadata or other redundant information. And many images can be compressed further with lossy compression with little, if any, visual quality loss. In short, there aren’t a lot of sites where optimizing images isn’t a good idea. And that’s especially true of photographers’ sites because we tend to include a lot of photos.

I’ve been reviewing several of the image optimization options available to photographers using Wordpress for their sites. While they all do fundamentally the same thing–make your image file sizes smaller–each does it in its own way and with its own pricing model. You can find the other reviews here.

In this review I’m focusing on what is nominally the oldest of the cloud image optimization services.

Smush-It was the first major cloud image optimization service. When the original developers ran into hosting problems, Yahoo stepped in in 2008 and took it over. It became one of several webmaster tools that Yahoo offered for free to make the web a more useful place. But, like other such services (like Pipes), it was long neglected and then abandoned as Yahoo’s priorities shifted. For a long while the WP Smush.it Wordpress plugin remained available, but the underlying service on Yahoo’s end was patchy and unreliable. When trying to optimize your sites images you’d often find the service unavailable, and it could remain offline for quite some time. But it was free, and, for a long time, was one of the only image optimization options available in the cloud if you weren’t able to install any of the utility scripts on your own server. And then Yahoo flipped the switch without warning in March 2015, and the underlying Smush-It cloud service went dark, impacting the hundreds of thousands of websites that were using it.

Several developers swooped in to offer replacements. The one that made the biggest splash was the team from Australian company WPMU DEV. They converted it from an entirely free service to a freemium structure. And rather than just keep applying bandaids to the plugin, they completely rewrote it and, more importantly, set up their own back-end cloud infrastructure to do the actual crunching. The reborn WP Smush plugin has joined WPMU DEV’s large stable of hundreds of Wordpress plugins and themes. Despite the name, it’s not really the same thing anymore, even if it serves the same function.

There’s a free version that’s limited to images under 1MB and applies throttling, and a premium (ie. paid) version, WP Smush Pro, that raises that limit to 32MB, removes the throttling, and adds several other improvements.

The plugin installs just like any other Wordpress plugin. Once installed, the plugin’s settings in the free version are minimal. You can choose whether to optimize images when they’re uploaded and … well, that’s it.

If you decide to upgrade to WP Smush Pro, the greyed options become available. They include applying lossy compression, integration with NextGen galleries, and making backups of the original image.

There are two ways to apply the image optimizing. One of them is that images will be automatically optimized as they’re uploaded to the Media Library (only after the plugin is installed, of course). The other is to “Smush in Bulk”.

If you’ve disabled the automatic optimization on upload, you can also optimize images individually. That’s accessed through the Wordpress Media Library, where you’ll find a new WP Smush column. (Make sure to be in the Media Library’s list view rather than the thumbnail grid.) Images that haven’t yet been processed will have a Smush Now! button. 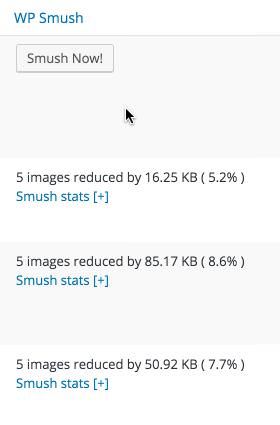 For images that have already been optimized, that column also reports the number of Wordpress derivative thumbnails crunched as well as the filesize gains. You can click on the plus symbol to expand to get results for individual files. 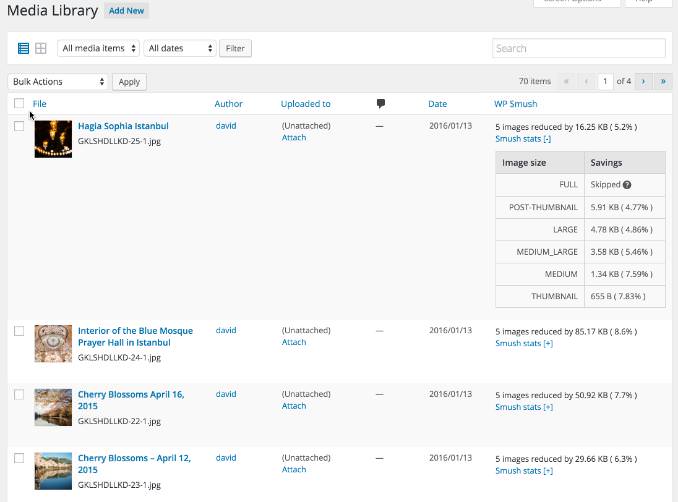 WP Smush works on a freemium model. The free version is feature-limited, with the hope that it will convince you to upgrade to WP Smush Pro, the paid version. And in case it slips your mind, there are plenty of reminders that you can buy an upgraded version.

Some premium image optimization services charge per image. Some charge for the amount of data. And others charge a flat rate for a year’s usage.

WP Smush Pro uses a membership subscription model. There are two options. One is a full membership to WPMU DEV’s program, which gives you full access to their catalog of plugins and themes. The regular price is $99 per month (with options for quarterly and annual payment as well, and there are often discounts on the first payment).

If you don’t want or need all those other plugins–or the associated expense–you can also subscribe to just the single WP Smush Pro plugin, which is $19 per month. That allows you to install on an unlimited number of sites and has no data caps or maximum numbers of processed images. It also gives you access to WPMU DEV’s premium support. 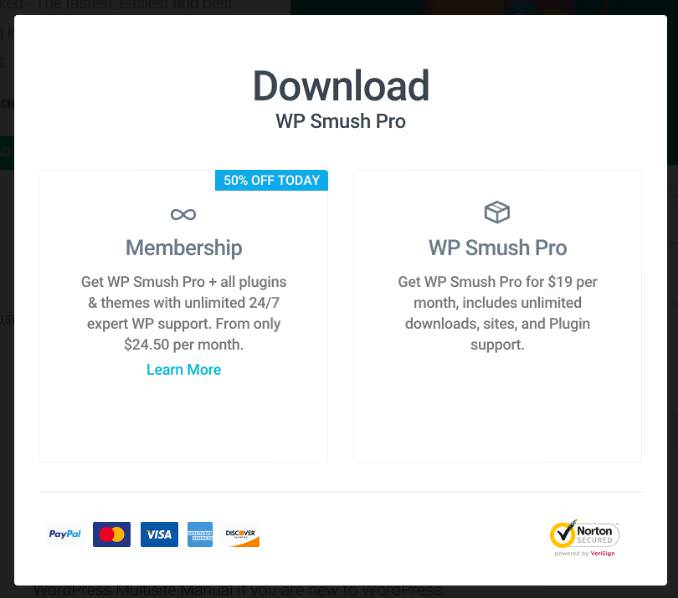 The free version of WP Smush Pro doesn’t have much in the way of flexibility or control, but it works and is simple. Many sites will probably work great with the free WP Smush version. But photographers often upload images larger than 1MB to their sites. And that’s a big catch with the free version.

To increase that filesize limit you’ll need to upgrade to the Pro version. And it’s hard to argue with the performance–it works well and reliably. But the Pro version comes with its own important catch: price. Because of the Wp Smush Pro pricing structure, for most users–or at least those that aren’t processing tens of thousands of images every month–it’s likely to end up being by far the most expensive option for image optimization compared to other alternatives, even with the frequent discounts that WMPU DEV offer. With performance so similar amongst the various optimization plugins, because they largely rely on basically the same set of underlying optimization tools under the hood, there are frankly alternatives that offer much better value.