I’ve been testing out the Xcellon DRD-401 Four-Bay hard drive enclosure as a large local storage for backing up photos. Here’s my hands-on review. 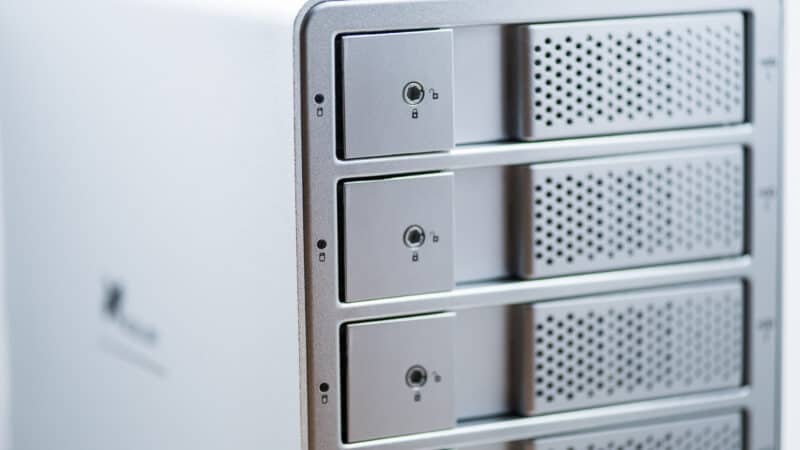 If you’ve ever spent much time on my site, you’ll probably have noticed that backing up photos is something I spend quite a bit of time on. I can’t afford to lose my photos, and digital files are very easy to lose. I’ve learned the hard way many times over the years that it’s a truism that it’s not if hard drives will fail but when.

One of the standard short-hands when it comes to backup is a 3-2-1 backup strategy. That is, have 3 copies on 2 different types of media and at least 1 copy in a different physical location.

In practice, I have more than that. In addition to my master working copy, I have a large NAS system backing everything up locally. I have copies on off-line hard drives. And I have a couple of full backups in the cloud (including with versioning).

I’ve been looking at options for another local storage option for backup for around 8TB of photos. This isn’t used as primary workspaces–I have other devices for that–so speed isn’t a high priority.

Over the years, I’ve used enclosures and systems from a number of different vendors for this kind of use. From Western Digital to Seagate to Synology to Drobo to lesser-known ones like Akitio.

After a several generations-old Drobo died, I was intrigued by a relatively inexpensive 4-bay enclosure from Xcellon. It’s not a brand I was familiar with, but the folks at B&H Photo kindly sent me one to try.

They offer several different kit bundles, ranging from just the bare enclosure to a bundle with four 6-terabyte WD Red hard drives. That’s the version I’ve been using. It has a total storage capacity of 24 terabytes, although the usable space is less than that depending on which configuration you choose.

The enclosure is compatible with standard 3.5″ SATA I/II/III hard drives. You can also use SSDs; for those you’ll need SSD converter brackets.

The drives insert directly into the enclosure, with a door for each bay to lock the drive in place. If using 3.5″ SATA drives, there’s no need for mounting brackets or screwing on trays. If you’re using SSDs, you will need to use converters to make them fit. 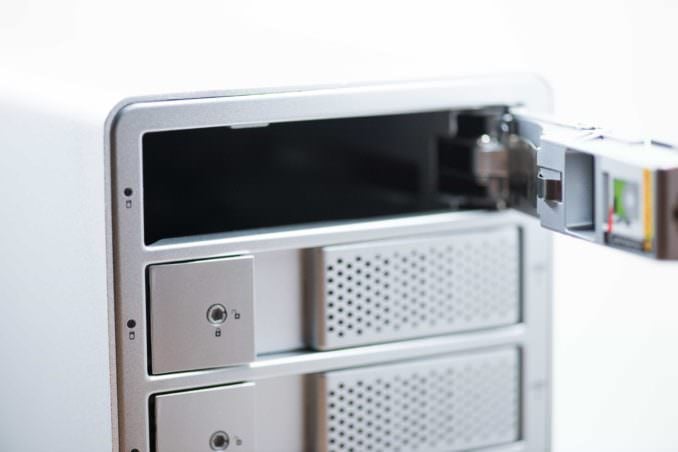 The system B&H sent me is bundled with 4 Western Digital Red drives, which are part of Western Digital’s range aimed at better performance and reliability in NAS systems like this (note, they’re not preinstalled, but installing is straightforward). It’s also compatible with other standard drives like the WD Green or Blue ranges or other brands such as Toshiba or Seagate. 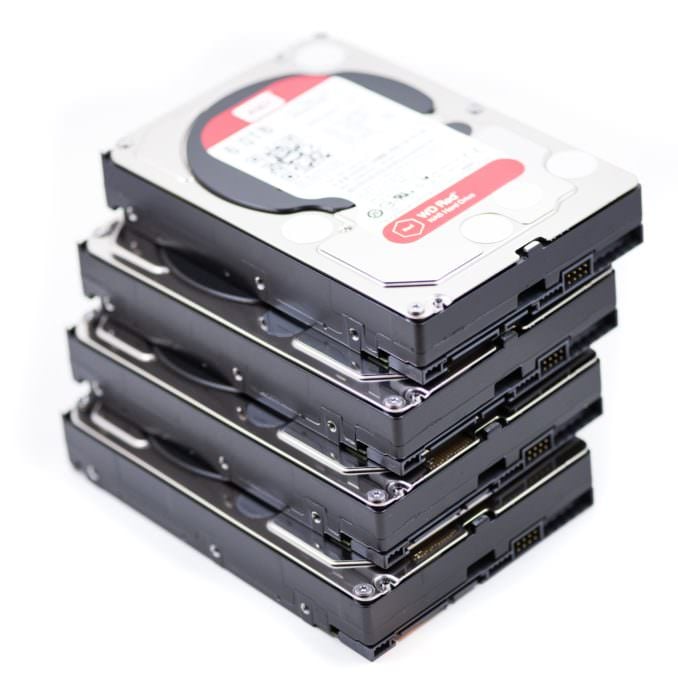 While some configurations do technically allow for drives of various capacities to be mixed and matched, and some systems like Drobos and Synology offer true mix-and-match hard drives, in general it’s much better practice to use drives with identical RPM ratings and, preferably, identical sizes. 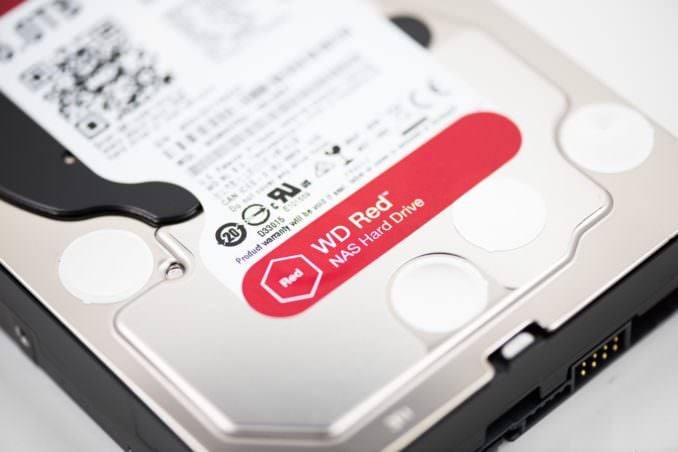 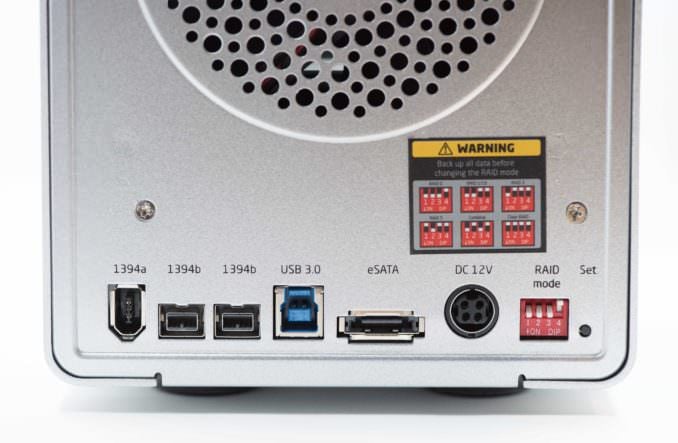 There are a number of ways to configure the drives in this device. You can, if you like, do the configuring in the software of your operating system. It’s a feature that’s built into most modern computer operating systems. And there are pros to using software RAID (and cons, too). I use a mix of hardware and software RAID arrays and haven’t found the need to come down strongly in favor of one or the other in my uses. But since this is a hardware review and on-board hardware configuration is a key feature of the enclosure, I’m going to focus on that here.

The hardware RAID configuration is handled by some old-fashioned dip switches on the back of the enclosure. 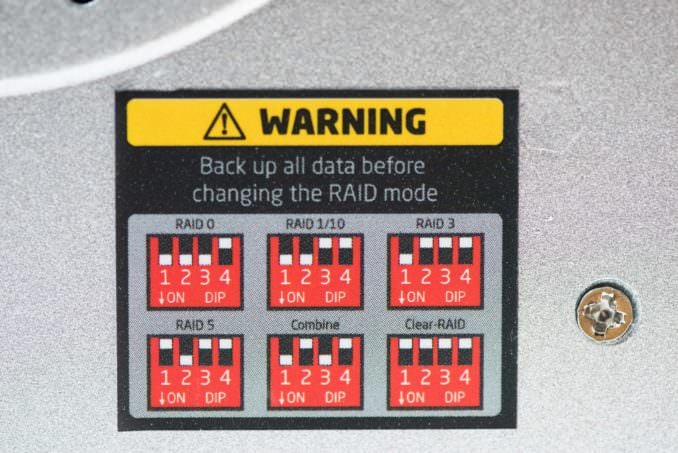 There’s a cheat sheet to the patterns on the back of the enclosure and another in the instruction manual. Just set the pattern to match whatever type of RAID (0, 1, 3, 5, or 10), JBOD (just a bunch of disks), or Span (all of the drives are combined to create a single large storage space) you want. Which types of RAID do what is beyond the scope here, but here’s a good overview.

I set it up as RAID 5 first and tested that first. That worked smoothly. File transfers were as expected, as was available disk space. I then reset it and switched to RAID 10 and plan to use it as that for increased redundancy and write speed at the cost of available disk space. With the way that RAID 10 works, the total of 24TB of hard drive space becomes 12TB of usable space, but there are also two copies of everything and it can survive one or more hard drives failing. The data is also striped, which helps with speed writing to and reading from the drives.

Once you’ve applied the hardware RAID settings, it should show up in your operating system as whatever kind of RAID array it is. The examples I’m using here are from Mac OSX, but it’s conceptually the same in Windows.

Before you go changing the RAID configuration, be aware that it will wipe the partitions and all the data on the drives.

Something to watch, though, is that when choosing the RAID type it’s not as simple as just setting the switches and turning the device on. You have to reset and register the RAID configuration in the enclosure’s on-board system. That procedure is easy and explained well in the instruction manual; it’s just a combination of switches and holding the power and the small Set button next to the dip switches for the required sequence of beeps. Here’s the specific procedure:

One of the important issues with external enclosures like this is the fan. It needs good cooling to prevent the drives from overheating. But a big fan can make a lot of noise, or at least enough noise to be a distraction in an office.

I’ve found the fan on this model to be very quiet. If you put your head close, you can hear it, but it’s certainly not loud enough to be distracting in a normal office environment. If you’re setting it up somewhere like a quiet bedroom, you might hear it, but I have it set up in my office about 6 feet from where I’m sitting and really can’t hear it at all. 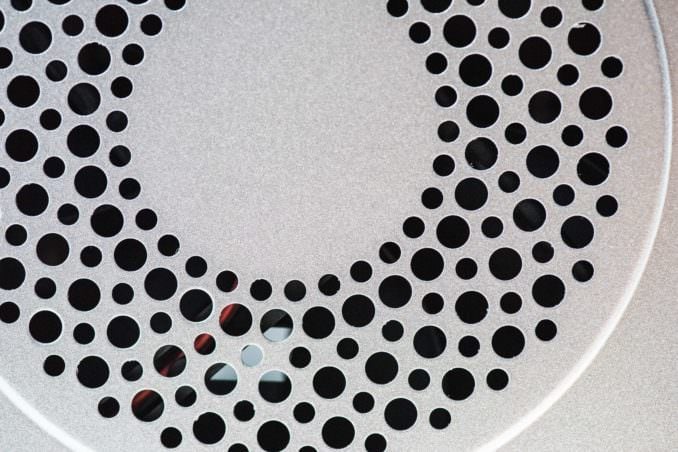 If one of your drives develops a fault, it will alert you with beeping and turning off the corresponding drive light (hit the Set button on the back to turn off the beeping).

I haven’t yet had to put this feature to the test, thankfully.

Note that the cables are 3-foot cables, which might not be long enough for many users.

The system is sold in various bundles with and without hard drives. If you’ve purchased a bundle with hard drives, the drives will be boxed separately individually.

When you insert the disks, the door closes behind it to act as a lever to push it to lock in place. But you need to make sure it clicks.

Warranty. The enclosure comes with a 3-year limited warranty. Whichever hard drives you choose have their own warranty terms.

Manual. You can find a PDF version of the instruction manual here.

Locking Bay Doors. If you’re so inclined, you can lock the bay doors individually. A couple of small hex keys are included. 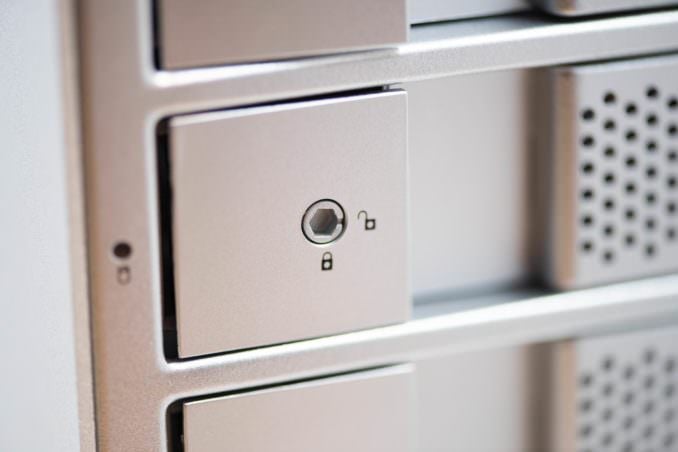 After using it for a while, I’ve been happy with it. It’s a straightforward system that doesn’t have the complications that can come with extra bells and whistles. There are no customized RAID configurations that add extra features but can also introduce some extra risks.

Configuration and setup is simple. I have no complaints in terms of fan noise or excessive heat. And I’ve found the performance to be good, with as-expected transfer speeds over USB 3.0. So for the purpose I’ve been using it for–as one of several backup targets–I’ve found it to be a good, cost-effective, and reliable option.

I haven’t had a chance to experiment with SSDs in the enclosure, but that would seem to have a lot of potential if you’re looking to use it for external scratch disks or for video processing.

B&H Photo offers a number of different bundles for the Xcellon DRD-401 4-bay enclosure, starting with the bare enclosure at $269. There are versions with various sizes of SATA hard drives as well as versions with SSDs.

You can find the various options here.