When sponge divers off the coast of the Greek island of Antikythera in 1900 stumbled upon shipwreck, they had no idea they’d discovered the world’s oldest computer. 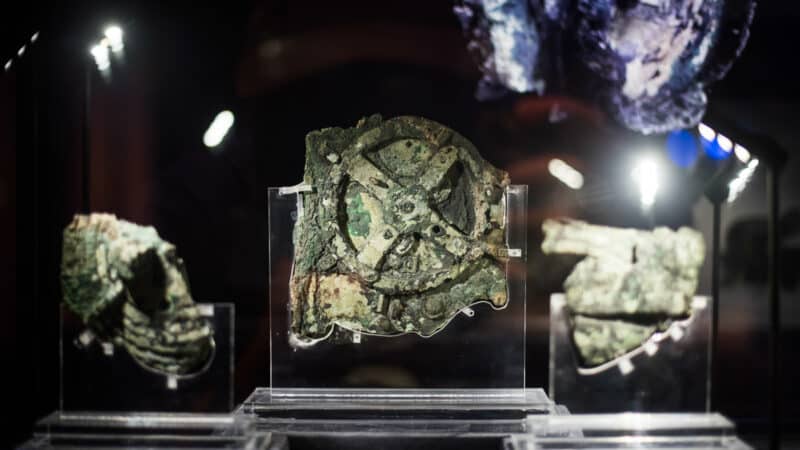 When sponge divers off the coast of the Greek island of Antikythera in 1900 stumbled upon a bronze hand with a finger missing, underwater archaeologists swept in to find an incredible collection of statues and coins.

Working with the limits of early-20th-century underwater excavation, they recovered what they could. Much of the cargo was damaged by thousands of years in saltwater. But some of it survived in extraordinarily good condition, thanks, in some cases, to be partially buried under the sand and silt and therefore protected from the corrosive saltwater.

Several of the finds are now on public display, scattered through the National Archaeological Museum in Athens. They include the Antikythera Ephebe, a large bronze statue. There’s the impressive head of a philosopher, with its eerie piercing glass eyes. And downstairs in the open courtyard next to the cafeteria, there are some weathered marble statues, including one of a large horse, some of which has been weathered and some preserved remarkably well.

But amongst the haul were some small fragments of bronze. For decades after they were found, no one was quite sure what they were. And, indeed, it’s really only since the 1970s, and even more recently, that consensus has developed on them.

As impressive as the statues and coins are, it’s these fragments, collectively known as the Antikythera Mechanism, that are the most extraordinary. It’s often referred to as the first analog computer.

With incredible precision of creativity, engineering, and manufacturing, its 36 or so cogs and wheels work together to make a whole range of calculations.

Basically, it’s a remarkably sophisticated astronomical computer. To the extent that its students have managed to unlock its secrets, it appears that it was used for calculating positions of the stars, moon phases, eclipses, and the host city of the Olympic games in any given Olympiad (there were only four choices at the time).

And just as remarkably, its creator carved instructions into the faces, suggesting it might have been used for students or wealthy benefactors.

Who created it remains a mystery. And it’s not clear exactly how old it is; estimates range from 100 BC to 205BC. But its raw ingenuity and sophistication for its era is mind-boggling. It wasn’t until about 1500 years later, with the development of astronomical clocks, that European technology finally caught up again to a similar point.

Originally, it contained at least 30 gears, dials, scales, axles, and pointers. On the surface of many of the fragments, there are Greek inscriptions about astronomical and calendar calculations as well as an instruction manual. The whole thing was likely originally contained in a wooden case, although that part has long since gone.

From when it was first found, it was suspected to be some kind of astronomical, astrological, or navigation tool, but it’s only in recent decades that more of its secrets have been unlocked thanks to cleaning, dedicated research, and a battery of new-technology scientific tests like X-ray linear tomography, photography, plain radiography, and advanced surface imaging and high-resolution 3D X-ray tomography.

The upshot is that scientists have been able to peer inside and then recreate the workings of the Mechanism. Three of the most important recreations of the machine, each distinctive, are on display in the exhibit alongside the original Mechanism. More recently, researchers at the University College London have unlocked more of the mechanism’s mysteries.

Photos of the Antikythera Mechanism