The Belfry of Bruges

BRUGES, Belgium — The Belfry of Bruges is the most famous landmarks is this charming medieval city. But it hasn’t all been peeling bells and glorious views in its nearly 800-year history. 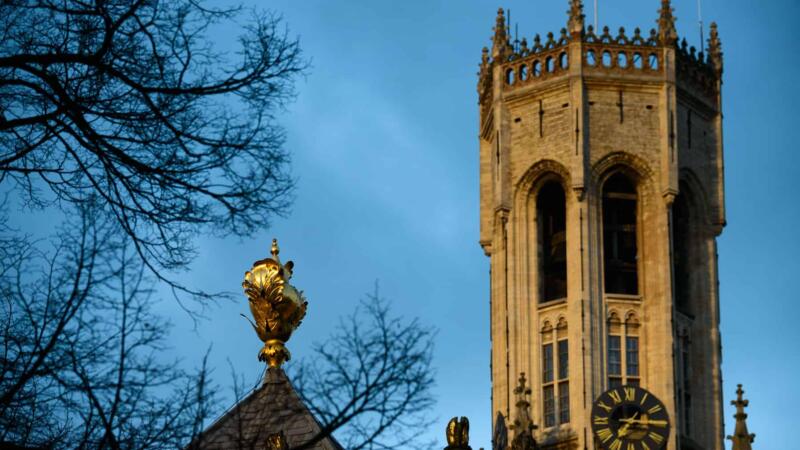 Ah! The enchantment of the light and wind after so long a struggle upward in the stuffy darkness! The city of Bruges lies spread around you, a carpet of orange-red roofs and gray squares. The canals, with their broken silver, bound it on either side, and the featureless flat landscape, discolored and dim, mounts to the edge of the grayish blue sky, an empty circle. Below you–immediately below–lies the vast empty Grand Place, looking, no doubt, precisely as it looked five hundred years ago.

The Belfry (or Belfort, as it’s sometimes known) is probably the most famous of the several famous landmarks in Bruges.

It stands 272 above the scenic medieval square below, the Markt.

It’s a clock tower. It’s a carillon, with its 47 bells peeling out telling a musical story of the day. And in an era when towns paid dearly for their own independence and protected it fiercely, it was used to store and protect the town’s charter. These days it’s one of the city’s leading tourist draws.

And yet, oddly, the Belfry remains unfinished.

It’s not for want of trying. But the Belfry of Bruges hasn’t been able to catch a break. Construction started in 1240, but in 1280 much of it burned down. The tower was rebuilt, and between 1483 and 1487 a new top was added. The first stage was the octagonal stone top that you can still see there. On top of that was a wooden spire decorated with a statue of Saint Michael slaying a dragon. But it turns out that as nice as Saint Michael might have looked, it also served as a lightning magnet. In 1493, one strike sparked a fire that destroyed the wooden top and damaged many of the bells. A new wooden spire was added, but it too burned—in 1741. At that point, they just gave up and decided that it looked good as is. So the Belfry that you see now is actually shorter than it used to be.

In the market-place of Bruges stands the belfry old and brown; Thrice consumed and thrice rebuilded, still it watches o’er the town.”

The region has a rich history of belfries. The Belfry of Bruges is one of 33 Belgian belfries that are protected as World Heritage sites, along with 23 in northern France.

If you’ve seen the movie In Bruges, the Belfry will look very familiar. The exterior shots in the movie are real, but the interior shots were done in a studio. One of the biggest differences you’ll notice is that while the area at the top of the Belfry is indeed open to the elements, the openings are covered in chicken wire so that some of the things that happen in the movie can’t happen in real life.

Photos of the Belfry of Bruges

The Belfry of Bruges