VALLADOLID, Mexico — Cenote Xkeken, near Valladolid, is one of the prettiest of the 3,000 or so underground cenotes scattered across Mexico’s Yucatan peninsula. 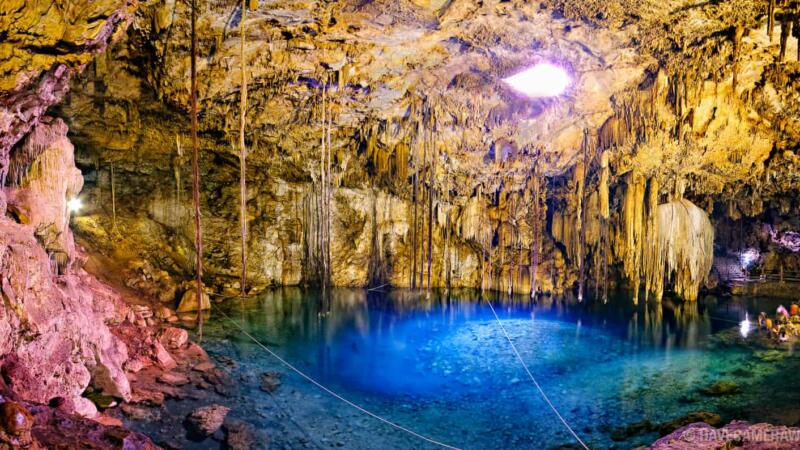 If you’ve ever driven inland on Mexico’s Yucatan Peninsula, you’ve no doubt noticed how straight and flat the roads are. There aren’t many hills, and the few that are there aren’t very tall. That’s one of the things that encouraged the Maya to build pyramids in their cities–the tops of them towered over anything nearby. And you might also have noticed that there aren’t any major rivers. At least not ones that you can easily see. Those two things are both because most of the peninsula is made up of a massive plain of porous limestone.

There is, in fact, quite a lot of freshwater nearby, even rivers up to 95 miles long, but you won’t see them on the surface–they’re underground, channeling through the twists and turns and underground caverns of the porous limestone. The Yucatan is in fact pockmarked with thousands of sinkholes filled with freshwater. The Maya called them dzonot. The Spanish transliterated that as cenote. And of the estimated 3,000 or so cenotes on the Yucatan Peninsula, only about half have been documented.

There are an estimated 3,000 or so cenotes on the Yucatan Peninsula.

But it was this abundance of readily-accessible underground freshwater was one of the things that supported the many large Mayan cities that were scattered across the Yucatán in pre-Columbian times.

Some of them, like the ones at Chichen Itza, look basically like small, open-top quarry holes that are filled with water. The Maya used them both as a source of fresh water and, apparently, as a site for religious sacrifices. But some of them are far more visually striking, among them Cenote Xkeken (often referred to as Cenote Dzitnup after the small town nearby), which is just a few minutes out of the colonial town of Valladolid in the center of Mexico’s Yucatan Peninsula.

Cenote Dzitnup (or, more accurately, Cenote X’keken) is one of the best to visit. It’s also one of the prettiest, with limestone formations arching over the water. It makes for a fun, refreshing place to visit to see a very pretty little natural underground oasis.

It’s set in a limestone cave with a single opening in the ceiling providing the perfect opportunity for rays of sunlight to show off the natural beauty of the water. The cavern itself is humid and steamy, but the water is cool–most of the waters fresh waters under the Yucatan stay at a constant 76 degrees Fahrenheit (25 degrees Celsius) year-round–and stunningly clear. With small bats nesting on the ceiling, small black fish in the water, and limestone formations overhanging the water, it’s a unique and atmospheric place for a refreshing dip to escape the Yucatán’s heat.

From the photos, you might think that the colors are artificial, something like the gaudy light shows of Ruby Falls in Tennessee. But they’re really not. The water, in particular, really does show up that blue from the sunlight streaming through the small hole in the ceiling. There is some artificial lighting for the very sensible reason of being able to see, but it’s not colored for dramatic effect. The camera’s sensor manages to make better use of the low light than the human eye, bringing out some details and colors that aren’t as clearly apparent, but the colors are pretty much as you see them.

Cenote Dzitnup these days is used as a swimming hole. Two ropes have been extended across the water, presumably for the less confident swimmers, and a wooden walkway has been built across one side to provide access. And there’s a lifeguard on duty whenever the cenote is open to visitors.

What to Know Before You Go to Cenote Dzitnup

Getting to Cenote Dzitnup is easy. It’s only a few minutes driving outside Valladolid and easy to find. Or if you prefer, it’s also an easy bicycle ride along straight, flat roads. From the parking lot, it’s only a few dozen feet down a narrow passageway carved out of the rock into the main cavern. I’ve been there a couple of times now and never found the place crowded, although the size of the parking lot suggests that it can get busy.