Chichicastenango is a town where buying and selling is everything. Its markets are reputed to be the largest in Central America; the range of wares on offer is truly impressive. And the indigenous Maya culture adds a distinct local flavor to the town. 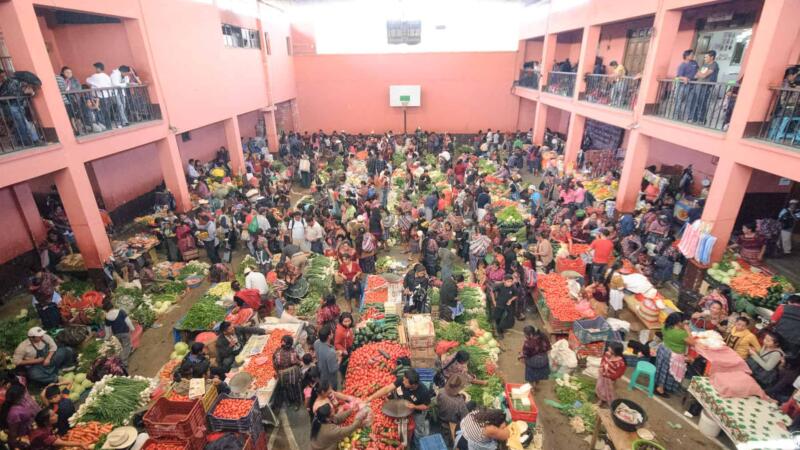 Who knew I had so many friends in Chichicastenango? And they’re such a friendly lot to boot. Which is odd, come to think about it, since I’d never been there before. But everywhere I turn I’m greeted with an enthusiastic “hola amigo.” And to a man, woman, and child, they’re all so insistent on giving me a very special price.

Truth be told, anyone who looks like a prospect for spending money is an amigo here, especially if their native currency is something other than the quetzal. This is, after all, a town where buying and selling is everything, a town built on commerce. Not in the way that Wall Street is built on commerce, mind you. Here the transactions are back to basics–buying and selling of actual stuff, some of it you might need, but much of it you probably don’t. Whether it’s souvenir wooden masks, colorful woven textiles, fresh produce, household supplies, live chickens or turkeys, or, once a year, even cattle, Chichicastenango is your place. It might not be as well-heeled as Harrods, but the range of stuff available for sale is truly impressive.

Chichicastenango’s markets, held on Thursdays and Sundays, are reputed to be the largest in Central America. The town’s census population is about 45,000, but the day before each market day many people stream in from the surrounding area to set up shop. Many of the vendors, often whole families, flock into town the evening before with their wares and bed down in their stalls space. And since the town is about 6,500 feet above sea level–this is the Guatemalan highlands–it can get pretty chilly at night for those sleeping in the street stalls.

The local population is mostly K’iche’ Maya (hence the “Chichi” part, which is attached to the root “tenango” meaning roughly “place of”), and their local traditions remain deeply rooted. The town’s landmarks are few, but both the main church, Santo Tomas Church (Iglesia de Santo Tomas), and the colorful cemetery serve dual purpose as Catholic and Maya religious sites. Most of the locals speak one of the 31 Maya languages as their first language and Spanish as a second language. English, to the extent it’s there at all, is mostly market English.

Chichicastenango, or Chichi, isn’t far from Antigua or Guatemala City as the quetzal flies, but it still takes a couple of hours to get there along windy and patchy mountain roads. You can either take a chicken bus or tourist shuttle. The latter costs a few dollars more and is less colorful, but it’s also more comfortable and quicker. One night is plenty, but be sure to arrive on a Wednesday or Saturday if you can.

It’s right in the heart of town on the main square. There’s no way to miss it if it’s market day.