COPENHAGEN, Denmark – Perched on a rock about 10 feet from the shore in Copenhagen, the century-old bronze statue of The Little Mermaid has become a national treasure inspired by the famous story by Danish author Hans Christian Andersen. 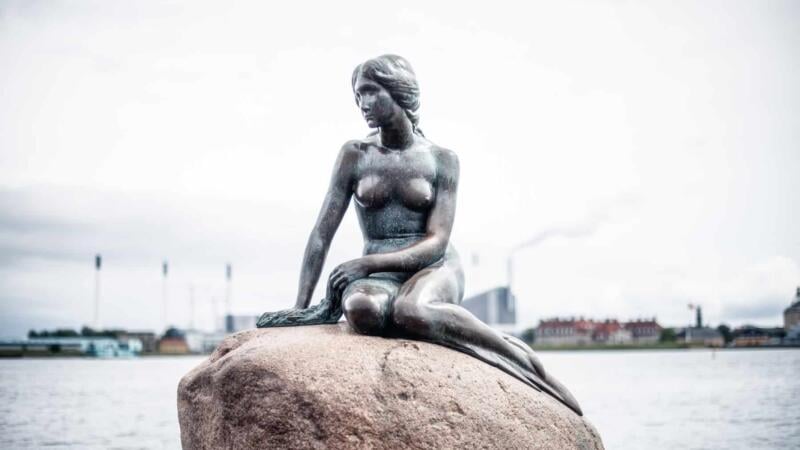 I guess it shouldn’t be so surprising that it’s small. It’s right there in the name, after all: The Little Mermaid. As with the Mannekin Pis in Brussels, there’s something a bit jarring for an iconic attraction with such an outsized reputation to be so petite.

It’s a roughly life-sized statue of a mermaid. Well, life-sized for a 4-foot-tall mermaid, that is. She’s slouching and looking forlorn.

It looks newer than you’d expect. That’s because the one you see there now is a replica. The original was unveiled in 1913, but over the following century was subjected to all sorts of indignities and even violence, often becoming the focus of vandals or political protests.

The sculptor, Edvard Eriksen, didn’t chance on the idea of a small mermaid randomly, of course. It’s inspired by the fairytale of the same name by the Danish author Hans Christian Andersen.

In 2015 the statue made news, with the help of Facebook. When a Danish politician posted a photo of the century-old statue of the topless mermaid on her Facebook page, Facebook initially banned the image for “too much bare skin or sexual undertones.” In a small victory for common sense, Facebook later relented and allowed the image.

The Little Mermaid is perched on a rock at the entrance to the harbor in Copenhagen next to the fortifications known as the Kastellet. Just walk along the waterfront and you’ll come across it.

There are no tickets or entry times. It’s publicly accessible all day and night. It’s basically a statue in a public park. The only difference, in this case, is that it’s about 10 feet offshore.

This being the selfie generation, in warm weather, you’ll probably see people taking off their shoes and wading onto the rocks to take a selfie or pose with the mermaid. Be forewarned though that those rocks are slick with seaweed and the water can be very cold if you fall in.