A Caribbean Island 100 Miles from the Sea

I’m on a real Caribbean island. But it’s 100 miles from the sea. Flores is a tiny island village in Guatemala’s Lake Peten Itza. It makes for a convenient jumping off point for visiting the nearby Maya ruins of Tikal. 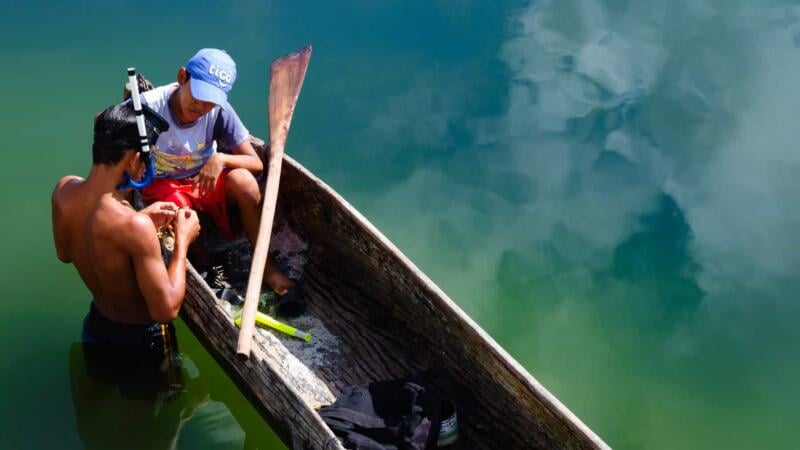 It feels like the Caribbean. It’s hot. It’s humid. The locals are laid-back. And in every direction, you’re surrounded by water. It’s easy to forget that you’re 100 miles from the sea.

Flores is a tiny island in Lake Peten Itza in the trunk of the Yucatan Peninsula, not far from Mexico and Belize. It’ll take you only 10 mins–maybe 15 if you’re strolling–to walk right around the island. From end to end it’s only a quarter of a mile.

And ringing the island is a new paved walkway so you can take in an unobstructed view of Lake Peten Itza in 360 degrees. Only one small causeway connects Flores to the mainland and its sister town, the larger and more modern Santa Elena. So you’ll have to try very, very hard to get lost.

The island was once one of many Maya settlements in the areas near the lake. The natural protection afforded by the water helped protect the settlement for a while, but eventually, it succumbed to the Spanish. The settlement was razed and the Spanish built their own colonial village there. They built a church in the center of the island on the highest point fronting a very small Parque Central, and they paved the streets with cobblestones.

The island sits in a narrow stretch of Lake Peten Itza. Much bigger than it looks from Flores, the lake is about 20 miles long, 3 miles wide, and up to 500 feet deep, making it the second largest in Guatemala. And it supports plenty of wildlife. Aside from fish and birds, as you would expect, in some areas there are crocodiles, jaguars, howler monkeys, and spider monkeys. But you don’t need to worry about any of those in Flores. To see those, you’d have to take one of the boats to nearby jungle-covered shorelines, where stops include a zoo and a lookout built into the trees with a panoramic view of the lake.

Or you can go to the other island nearby. About half a mile to the west of Flores is a tiny island with only a few buildings and a tall radio tower standing at its center. From Flores, you can read a sign saying “Museo.” The island doesn’t have an official name. It’s known to the locals simply as Radio Peten after the radio station that has been broadcast from there since 1968.

Its museum is a single room packed from floorboards to rafters with an odd assortment of Maya artifacts, old radio and music technology, telephones, and guns. For some, there are photocopies of old articles describing them, but for most of them, you’ll have to rely on the owner to tell you what they are.

Elsewhere around the compound are some of the vintage motorbikes that the current owner, the son of the original founder, likes to restore (although there’s no room to ride them on the island). Soon there will be three hotel rooms on the northern side of the island facing the waterfront, but when they’ll be ready to house their first guests is anyone’s guess. The place does run on island time, after all.

Flores/Santa Elena is a great jumping-off point for visiting Tikal Maya ruins, especially if you’re flying. It’s about an hour to Tikal by shuttle bus.

Flores can get hot and humid, with Caribbean-like weather. It is, after all, the base of the Yucatan Peninsula (but without a sea breeze).

Flores is quaint, but it’s also small. A night or two should be plenty.

If you can, stay at a hotel with a waterfront view. You’ll pay a few quetzals extra, but if you’re there you may as well have a view of the lake.

The airport at Flores, officially known as Mundo Maya International Airport (code FRS) and actually in a suburb of Santa Elena, is only a few minutes from Flores. The airport is tiny but functional, and you’ll be very limited in food and drink options there. You also won’t find long lines at security. Only a few airlines go there–TACA being one of the main ones. There’s a shopping mall with a new Pizza Hut across the highway (with a pedestrian overbridge) if you’re looking to kill time and grab a bite before your flight. Fun fact: The airport was reportedly originally built by the CIA.

Check the CDC website for current health warnings and recommendations and check with your doctor or a specialized travel clinic, preferably at least a month before your trip (some vaccinations require follow-up shots to be effective). That’s especially important if you plan to head to other places in Guatemala or Central America where malaria and dengue fever might be problems.

Sadly, Guatemala does have a violent crime problem, although there are signs of improvement. The sparsely populated Peten region has been particularly problematic in recent years thanks to it being a drug trafficking thoroughfare, essentially acting as a smuggling land bridge linking South and North America. While most of that serious crime hasn’t been targeting tourists, I still highly recommend that you check the US State Department’s Travel Advisories for Guatemala or the UK Foreign Ministry’s Travel Advice for Guatemala for up-to-date information.

A Caribbean Island 100 Miles from the Sea