MEXICO CITY, Mexico – The Gran Hotel Cuidad de Mexico is an Art Nouveau gem in the heart of Mexico City’s historic district. It sits right on the Zocalo. 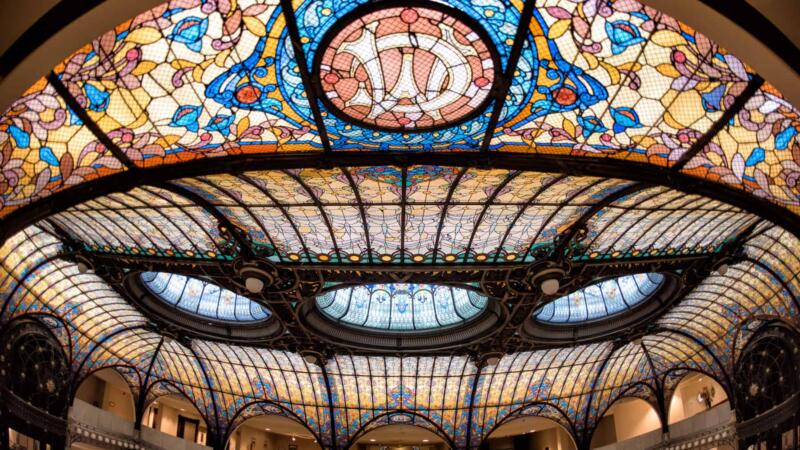 The Gran Hotel Cuidad de Mexico is well worth a visit even if you’re not staying there. It sits on a corner of the Zocalo in Centro Historico, the old-town portion of Mexico City that was itself designated as a UNESCO World Heritage Site in 1987.

There are newer, fancier, and more luxurious hotels in Mexico City. But none of them have the combination of prime location and old-world charm. And the building itself is an Art Nouveau gem.

The building dates to 1899, and it was originally the most luxurious department store in Latin America, known as El Centro Mercantil. You can still see the direct legacy of its first owner, Sebastian Robert, in his initials on the grand staircase.

If the Gran Hotel Cuidad de Mexico looks familiar, it might be because you saw it in a movie or on TV. It’s used as a location in the recent James Bond film, Spectre. It also appears in the movie Frida, where it plays a Parisian nightclub where Frida sees Josephine Baker perform.

As you walk in the main entrance, just off the Zocalo, you walk under a massive Louis XV chandelier. Immediately opposite, across the atrium, is a grand staircase that scales the height of the building. As you walk past the ornate canary cages and enter the main hall, to your left and right are two of the oldest elevators in Latin America. They still work, although they’re supplemented these days by some more modern ones nearby that are more practical for day-to-day elevating.

To see the building’s showstopper, look up. The domed roof is a massive Tiffany-style stained glass window. At night, it looks like wrought iron and glass—impressive enough, but not the spectacle it becomes when it’s backlit by natural light outside. Then it becomes a kaleidoscope of colors and intricate patterns. The building is hollowed out in its center so as to make one giant atrium under the colorful roof.

The department store was shuttered in 1959. Nearly a decade later, it was reopened as the Gran Hotel Cuidad de Mexico. It was given another round of renovations in 2004. If you’re planning to explore the Centro Historico on foot, it’s well worth considering.

The best way to experience the hotel is, of course, to stay there. I stayed there on my most recent visit to the city and found the rates to be surprisingly reasonable. But tourists are welcome to wander in to take in the beauty of the main atrium or visit the restaurant or bar.

The hotel has a restaurant on its rooftop overlooking the Zocalo. There’s also a large bar on the floor directly below, but it’s less impressive. It’s a shame—the setting is just begging for a top-notch, old-school cocktail bar. On a lower floor is a breakfast/lunch restaurant that still has a view over the Zocalo, albeit a much lower perspective.