This is not a place of sweetness and light. Hoa Lo Prison, better known in the west as “the Hanoi Hilton,” was first a French colonial jail for Vietnamese political prisoners and later used during the Vietnam War for American pilots held as prisoners of war. And it’s a place with an especially grim history. 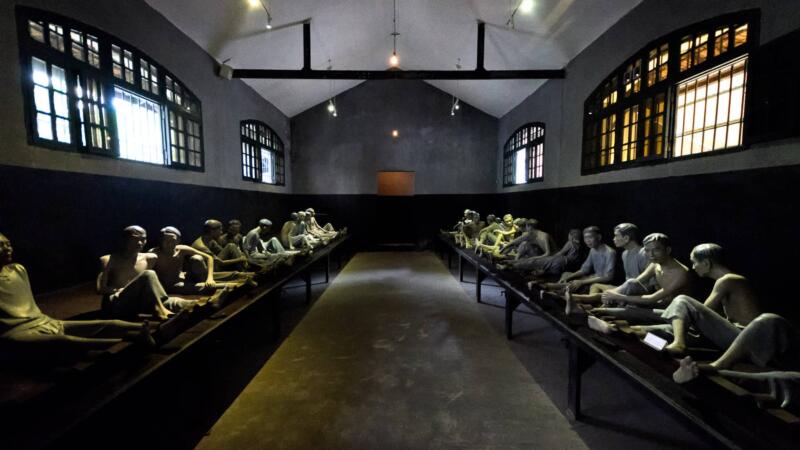 In case you’re tempted to think you’re in a place of sweetness and light, the ominous music playing over the sound system as you walk through the rooms is a not-so-subtle hint that this place has seen some misery. Southeast Asia is not renowned for the comfort of its prisons at the best of times, but Hoa Lo Prison in downtown Hanoi has a particularly grim history. This is a place of brutality. A place of torture. It’s the Hilton no-one wants to stay in.

I was brought in through enormous steel gates, above which was painted the legend “Maison Centrale.” I had been shot down a short walk’s distance from the French-built prison, Hoa Lo, which the POWs had named “the Hanoi Hilton.” As the massive steel doors loudly clanked shut behind me, I felt a deeper dread than I have ever felt since. [John McCain]1

Hoa Lo Prison used to take up the whole block. In 1993, the Vietnamese government decided that this prime real estate in downtown Hanoi could be put to better use. Most of the original jail has gone, a modern skyscraper with high-end Western restaurants and boutique stores now takes up much of the space. But one corner of the original jail has been preserved as a museum. Visitors can now walk through the cells that have been the scene of so much suffering.

And the museum dwells on that suffering, going into great detail about torture and barbarous treatment. Life-size dummies illustrate how inmates were shackled by one leg, unable to stand or walk. The walls of some of the cells on the dark death row have been cut away and replaced with glass so that visitors can peer into the tiny, dark, and dirty solitary confinement cells used for those awaiting their execution and others being punished. The panels of text, in English, Vietnamese, and French, lay out the degrading treatment by the prison guards toward their captives and the cruelty suffered by the inmates.

All of which at first seems a bit surprising given that this is a museum run under the auspices of the Vietnamese government. The official guidebook even notes that it is approved with the required publication permit.

But the villains of the story that the museum tells are not the ones a foreign visitor might expect, especially one from the United States.

Our humanitarian policy toward American pilots is aimed at further illuminating our just cause in order to win over the American people, support our enemy proselyting operations, and win the sympathy of world opinion for our people’s resistance war against the Americans to save the nation.[North Korean Politburo, 1969]2

Hoa Lo Prison, after all, is a place best known in the West as one of the prisons where American pilots who had been shot down and captured were kept as prisoners of war (although, technically, the North Vietnamese did not regard the pilots as “prisoners of war” in a legal sense). The pilots called it, sarcastically, the “Hanoi Hilton.” John McCain was held here at various times during his five and a half years as a POW. Some of the nearly 600 other American flyers held as POWs during the Vietnam War stayed even longer. It operated as a POW prison from August 5, 1964, to March 29, 1973.3

There are two rooms dedicated to the American pilot prisoners of war. The artifacts, photos, and text portray a markedly better image than the rest of the prison. There’s a bed, prisoners’ clothes, and personal effects. In that room, there’s also the flight suit and parachute that John McCain was wearing on his ill-fated bombing mission when he was shot down and fished out of Truc Bach Lake.

As if you didn’t get the message from that room, the other room goes further. There are photos of the American POWs celebrating Christmas, eating well, playing chess and even pool. The prisoners had freedom of religion while in the jail, the exhibit says. According to the captions, they also received good medical care, received care packages from loved ones, and were allowed access to reporters and humanitarian agencies. A video that plays on a continuous loop shows the prisoners being treated well, cooking Christmas dinner, even joking with their jailers. The prisoners should be so lucky as to be imprisoned by the Vietnamese, the narration says. And in an astonishing display of willfully missing the point, the narrator says that the POWs found their digs so comfortable that they named it after a luxury hotel chain.

If all of this sounds too good to be true, that’s because it is. It’s propaganda, pure and simple. There’s no denying that the photos and videos are effective–even though they’re staged, they’re staged well–but numerous accounts from the prisoners when they got home paint a much more abusive life in the prison, a life of beatings, rope torture, solitary confinement, deprivation, and arbitrary punishment.

Most of the museum dwells not on American prisoners, but on Vietnamese. This was a jail built by the French colonial government; its first prisoners arrived in 1899. The French kept mainly political prisoners here along with those awaiting sentencing at the nearby Court of Justice. It was originally built to house 500 inmates; at a peak in the early 1950s, just before the French were defeated decisively at Dien Bien Phu and forced out of Indochina, Hoa Lo held 2,000 prisoners.

To give a sense of the tone, here’s how one of the introductory text panels puts it (I’ve preserved the original halting English):

Living in the imperialistic prison, under a severe punishment and maltreated life but revolutionary patriotic soldiers still kept steady their sense of purpose and uprightness, turned the prison into the school where propagated revolutionary argument. Many soldiers ingeniously escaped from the prison to come back with the organisation, with people and made appropriate contribution to the cause of liberation of the motherland.4

The French called the place Maison Centrale (The Central Prison), but it became much better known to locals after the village its construction displaced. It was a village that specialized in pottery of small earthen stoves; Hoa Lo means, roughly, “the village of pottery stoves.” The residents were moved, as were two pagodas that once stood here.5

When it was built, Hoa Lo was one of the largest prisons in Indochina, covering 12,908 square meters. It was also one of the most fortified, using concrete rather than the usual local building materials. It was enclosed by solid stone walls 13 feet high and 2 feet thick. And just in case the walls weren’t already difficult enough to breach, they were topped with shards of broken glass and barbed wire connected to high voltage electricity. Guards watched over the outer perimeter from watchtowers. The iron doors and locks were even specially shipped over from France.6

The outer area of the complex held the administrative offices, guard headquarters, medical clinic, prisoner kitchen, and cells for European and women prisoners. The inner sanctum, with much heavier security, held the death rows and punishment cells.

Visiting is self-guided. You probably won’t need to allow much longer than an hour or so. The signs and exhibit panels are in Vietnamese, French, and English. It’s an easy walk from the Old Quarter.