Hoan Kiem Lake (also known as Sword Lake, Ho Guom, or Lake of the Returned Sword) is at the very heart of Hanoi’s Old Quarter and a cultural heart of the city. And it’s rather beautiful. 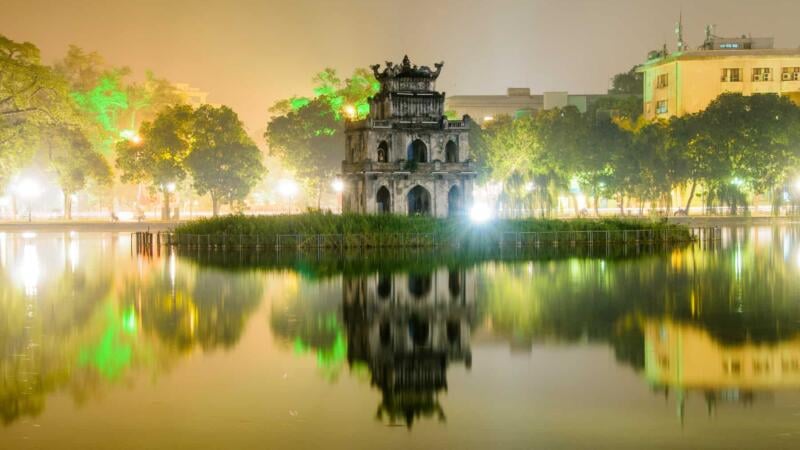 There’s a lot to be said for having a body of water in the middle of a city. Hanoi has a lot of lakes, but Hoan Kiem Lake is in its cultural and historic heart. It may not be big–it’s much smaller than West Lake–but the Old Quarter wraps around it, making for a scenic and relaxing escape from the chaos and bustle of the Old Quarter’s streets.

In the middle of the lake is a small island with a small stone Pagoda. You can’t get to it–there are no bridges or boats to the island.

But you can get to the other slightly bigger island on the lake–Jade Island. To get there, you cross a small bright red wooden bridge (The Huc Bridge) that leads to the entrance of an 18th-century Buddhist temple–the Temple of the Jade Mountain.

The glassy waters on the lake at night set off the city lights beautifully, enhanced by more lights around parts of the lake wall and on Jade Island.

And then there are those turtles. The lake’s name translates as “Lake of the Returned Sword.” It’s based on a legend of a turtle stealing–or, more accurately, reclaiming–a sword from Emperor Le Loi. The story goes that the emperor had been given a magical sword by the Golden Turtle God (Kim Qui) to smite the Chinese Ming Dynasty. After successfully fending off the invaders, the emperor was boating on Hoan Kiem Lake when a giant turtle rose up and snatched the sword from him and disappeared into the depths, never to be found again. It was explained as the Golden Turtle God reclaiming the magical sword.

There are, it turns out, giant turtles in Hoan Kiem Lake, but they’re very elusive and there’s probably only one of the revered creatures left in the lake. Sightings are rare.

But in April 2011, one of the famous turtles was captured for the first time to receive veterinary care. There are only three other living examples in this species known–one other in another lake in Vietnam and a pair in a zoo in China, so the long-term prospects for the species aren’t great, to say the least. The one in Hoan Kiem Lake was estimated at 80 to 100 years old and weighing in at around 440 pounds.

It’s just part of the landscape of downtown Hanoi, so it’s accessible day and night.

You can’t go to the Turtle Tower pagoda in the middle of the lake that’s pictured in the top photo, but you can cross the red Huc Bridge to visit Ngoc Son Temple that juts out onto the lake.

If you’d like to download any of my photos from Hoan Kiem Lake, you can license them directly from Alamy here. It includes most of the photos displayed on this page, as well as others. Pricing depends on the type of use, and there are licenses for various types of uses, including personal use and editorial publication.