ISTANBUL, Turkey — With about 4000 individual stores, Istanbul’s Grand Bazaar has endless rows of storefronts and a staggering variety of merchandise that make for an assault on the senses and, potentially, on the wallet. 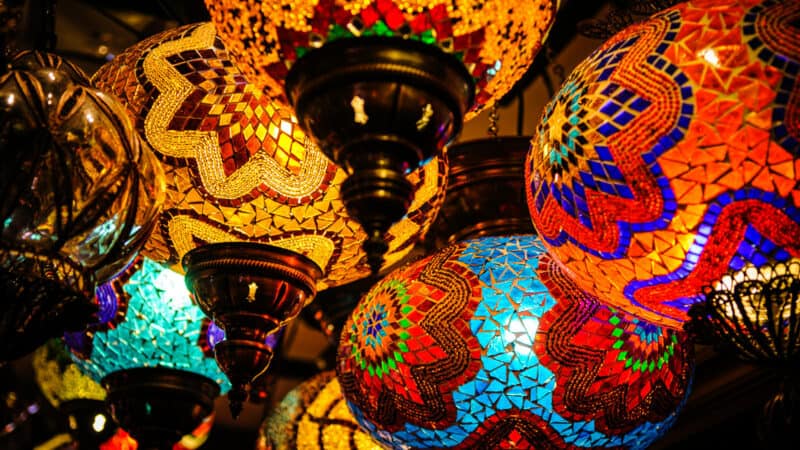 The dance of the Turkish carpet salesman begins, gently at first. Sit back, relax, and enjoy the show. The welcome of a long-lost friend followed quickly by an oh-so-polite offer to join him for tea. Like that, a runner appears with a silver tray of tulip-shaped tea glasses with sweet apple tea (for tourists) or traditional Turkish tea (black and bitter).

As you take a seat in the store, the salesman unfurls his carpets with a flourish. A helper fetches more from somewhere out of sight. As the pile on the floor grows, the salesman helps you narrow down to the “right” choice. Don’t like that one? Out it goes. Like that pattern but don’t like the color? Here’s one in blue. These are genuine Turkish and not some cheap knock-off from somewhere else? Of course, sir! Only the best. Bigger than you had in mind? Never fear, he can wrap it up into a tiny package with an airplane-friendly carry handle. More than you wanted to pay? You’re in luck. He’ll do a very special price, just for you.

The seemingly endless rows of storefronts overflowing with a staggering variety of merchandise of Istanbul’s Grand Bazaar (or Kapali Carsi, in Turkish) and teeming activity makes for a dizzying assault on the senses and, potentially, on the wallet.

Istanbul has several bazaars, but the Grand Bazaar, also known as the Covered Bazaar, is by far the largest, oldest, and most famous. There’s plenty grand about the Grand Bazaar. There are 4,000 stores, give or take, 65 streets, 18 entrances, and about 20,000 people work there on any given day. There’s a police station. There are restaurants. There are armies of tea servers hustling around delivering tea. And the Bazaar is spread over some of the prime real estate within the 5th-century walls protecting the heart of old Istanbul.

Founded when Istanbul sat at an important three-way intersection of the Silk Route connecting Europe, Asia, and North Africa, the Bazaar was a place where weird and exotic wares could be bought from merchants importing goods from all directions of the known world. Sultan Mehmet II, the conqueror of Constantinople, ordered the bazaar covered in 1461, an innovation for the time. And in doing so, he had unwittingly invented the prototype of the modern shopping mall. In these days of online shopping and overnight shipping to your door, a geographically centralized marketplace like the Grand Bazaar seems a quaint throwback to old-fashioned commerce. But then, that’s precisely the Bazaar’s charm.

In the centuries since, it has been damaged and restored several times, one of the downsides of putting a major city on top of one of the two major fault lines that run through Turkey. The current version–modern isn’t quite the right word–resembles small, covered streets lined with tiny shopfronts, creating a labyrinth of subterranean corridors. Carved into the walls are tiny spaces for shops. Except in the very heart of the Bazaar, where rents are much higher, stores are often not much bigger than a single parking spot. Each shop has a street address, making it a little easier to find a specific store if you’ve been given a recommendation. It’s still very easy to get lost. But that’s a good thing–you never know what you might find. This is boutique shopping on a massive scale.

The Bazaar’s thousands of stores are brimming with merchandise, but this isn’t the place to go for flat-screen TVs or fresh produce—there are other bazaars and districts in the city for those. The array of goods is eclectic and tends toward traditional decorative and luxury goods. You’ll find plenty of tourist souvenirs, jewelry, glass mosaic lighting, tea sets and metalware, hookahs, leather goods, ornately painted ceramics, textiles, and even, if you’re so inclined, a whole “neighborhood” specializing in belly-dancing costumes. And there are, of course, lots of Turkish carpets.

As you’d expect, the most heavily trafficked sections of the Grand Bazaar cater mostly to tourist dollars. Like most shopping districts, the central promenade, Kalpakcilar Basi Caddesi (Street of the Goldsmiths) has the most touristy wares and the most inflated prices. It also has the most conventional-style jewelry stores with sparkling shop windows. But getting off Kalpakcilar Basi Caddesi makes things much more interesting as the stores get more diverse and the prices better. The most unique and eclectic stores are near the market’s outer boroughs. In these outlying “districts” of the bazaar, you can find some obscure little shops specializing in recycled metal goods or fabric by the yard.

While the segregations clearly aren’t strictly enforced, broadly speaking, there are distinct districts within the bazaar, some focusing on clothes, others on carpets, some on jewelry. There are an awful lot of tiny shops, but a surprising number of them sell much the same things.

There are, of course, dozens of Turkish rug and kilim stores. Some offer the typical low-end rugs you’d imagine, some are high-end boutiques that even have their own fancy, glossy brochures, some offer traditional Ottoman and antique-style kilims, others are much more modern and minimalist, while others are a hybrid of the two, taking the best patches from old, frayed rugs and patchworking them together to create something new and modern.

Given the space constraints, only a few choice rugs are on display hanging on the walls, but if you express interest the salesmen are only too happy to sit you down inside and lay out rug after rug from the stacks along the shop walls; some even have storage space elsewhere and other shops they can pull even more stock from. And that, after all, is the initial objective: to get you in the store so that they can weave their sales magic.

Carpet buying can be a complicated business. Prices vary by the kind of thread (silk, cotton, wool, or combinations), how detailed the stitching, the size, and all sorts of other variables. Most salesmen will tell you that their rugs are genuine Turkish of the highest quality, but the novice buyer really has no way to tell whether any of that’s true. The thread might come from China or Afghanistan, even if the whole thing is woven in Turkey. And who knows whether it was really woven in Turkey? Certificates of Authenticity are, of course, readily offered, but again, how’s the novice to know? It’s very much a case of buyer beware. But even if you don’t plan to buy, there’s no reason not to have the experience of having them try to sell to you. Under the unwritten terms of engagement, entering a shop and accepting tea does not obligate you to buy—you’re agreeing to give the salesman a chance to show you his wares. So long as you’re prepared to stand firm, you shouldn’t come out any poorer—at least unintentionally.

The irrepressible hubbub of the Grand Bazaar is key to its appeal and much of that bustle is from its determined shopkeepers luring customers. Standing out front of each of the stores is at least one salesman—never women—whose job it is to get you inside to look at his wares and have a chance to perform. Haggling for a better price is an essential and expected part of the buying and selling that goes on in the Grand Bazaar. Nothing has price tags, after all, so everything is up for negotiation. But the experience itself is more than half the fun. But first, they need to get your attention above the constant din. They routinely try English first, followed by German.

Persistent rather than pushy, it’s all remarkably good-natured, and often inventive. Mostly, it’s variations on the usual: “sir, would you like to look at my shop?” or “it’s my turn to try to sell you something,” but every now and then there’s a more creative approach. In our wanderings, we heard: “are you a tourist? or a terrorist?”, “the shortcut is through my shop,” “sir, you want to spend some money? Yes, make the lady happy,” and even a nonsensical “shishkebab” (it was a clothes store). And, of course, flattery is a staple. You can’t accuse them of not trying.

Photos of the Grand Bazaar

Getting a Bargain at the Grand Bazaar

Bargaining is an expected part of buying in the Grand Bazaar. Don’t take the first price as the last word. But what constitutes a good price is an entirely subjective thing, and it’s probably not worth getting hung up too much on whether you’ve gotten the best price you could possibly have gotten (unless this is your business, of course…). Here’s a useful guide to bargaining in the Grand Bazaar.

Where is the Grand Bazaar?