On Top of Mandalay Hill, Myanmar

MANDALAY, Myanmar (Burma) – Sitting on top of Mandalay Hill, Sutaungpyei Pagoda features a large patio that offers a wonderful views over Mandalay City and the Ayeyarwaddy. 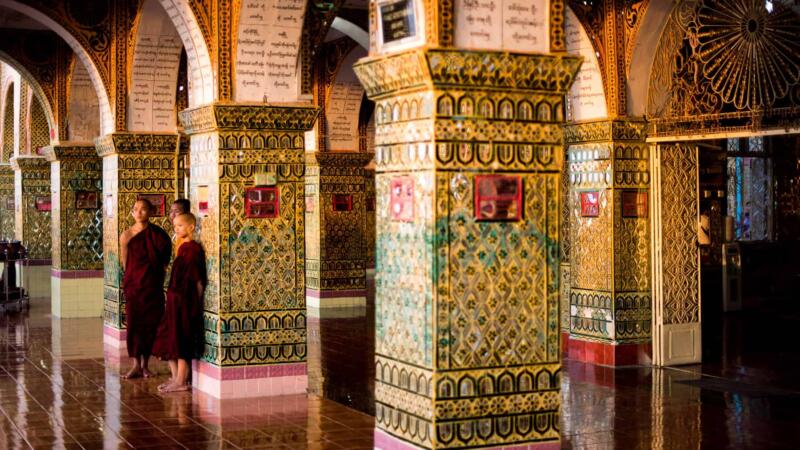 It’s a long way up. It’s humid. For much of it, there’s no sidewalk, so you’ll be sharing the narrow road with cars and buses. And you’ll have to do a good part of it barefoot. But it’s worth it, especially for the sunset.

Like Sagaing not far away, Mandalay Hill hosts a cluster of monasteries and convents. One, in particular, is a major attraction. Sitting on top of Mandalay Hill, Sutaungpyei Pagoda features a large ornately tiled patio that offers a wonderful view out over Mandalay City to the south. And if you time it right, and the weather cooperates, you can also watch the sunset over the Ayeyarwaddy River to the west.

And, because foreign tourists are drawn particularly at sunset, the sprawling patio, in turn, becomes a draw for local monks and novices to converge there to engage the visitors in conversation so as to practice their English.

As you go up or down, you’ll pass by several statues related to the story of the Ogress Sandha Mukkhi (San Dha Mukhi), including one of her offering up her sliced-off breast. Legend has it that she ruled Mandalay Hill, but that when the Buddha came they prayed together, and pilgrims came to make offerings to the Buddha. She had nothing to offer, so she sliced off her breasts and offered them to the Buddha with the condition that she would one day be the King of Mandalay. He agreed and reincarnated her 2400 years later as King Mindon.

I have more photos of Mandalay Hill and Sutaungpyei Pagoda here.

On Top of Mandalay Hill, Myanmar