The Musical Instruments Museum of Brussels

The Musical Instruments Museum in Brussels has a lot to see. But it has even more to hear. 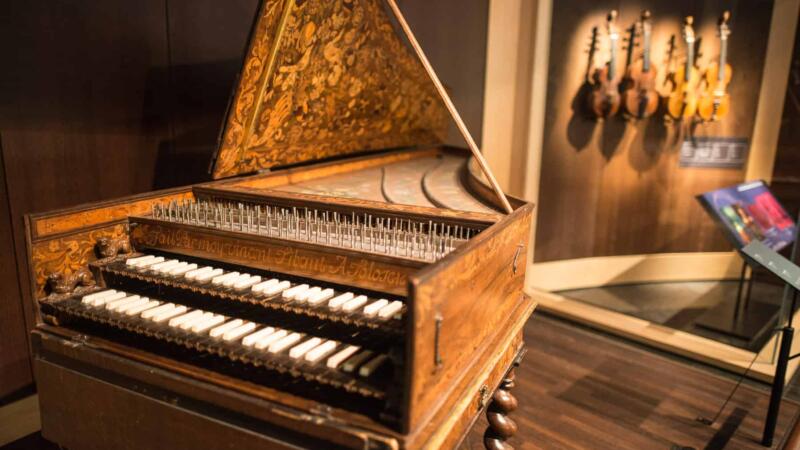 The Musical Instruments Museum (Musee des Instruments de Musique) in Brussels has a lot to see, but it has even more to hear.

This is a museum for the senses. But not the usual ones. Sure, you can look at the exhibits. You can read them if you read French or Dutch–the text isn’t in English. But here what you really want to do here is listen.

And yet it’s surprisingly hushed. As visitors wander through the museum, with its dim, atmospheric lighting that looks a bit like stage lighting, they’re wearing headphones. The portable audio players around their necks are loaded up with examples of the instruments you’re looking at being played. And so you get to hear the musical instruments doing what they best–playing music. This is what guided audio tours were made for.

With over 8,000 instruments from around the world and throughout history, the Musical Instrument Museum presents music in a truly global context. There’s also a very good collection paying tribute to Belgian musical history. Among Belgium’s musical claim to fame is that Brussels was home to Adolphe Sax, inventor of the saxophone.

As you work your way up through the museum, you’ll move through themes: mechanical instruments in the basement, traditional instruments on the ground floor, modern orchestral instruments on the first floor, and keyboard and stringed instruments on the second floor. You’ll see the usual suspects: oboes, bassoons, clarinets, and violins. There are pianolas and bass guitars, chimes and sitars. There are all sorts of keyboards that were once played in the great halls of Europe and, with their impossibly ornate inlay, served as decoration in between recitals. There’s even a mockup of a piano building workshop.

But the real strength of the collection lies in the instruments you never knew existed. Who knew there were so many variations on what we know as Scottish bagpipes? And that they come from all over, not just Scotland? How many different sounds can you get out of a drum, anyway? And what exactly is that weird-looking bendy thing that looks like someone glued a bunch of hookahs together? And what on earth does it sound like?

Unfortunately, you don’t get to play the instruments. Or maybe that’s a good thing. In the hands of experts, many of these instruments can create beautiful music. But in the hands of the average tourist, it’s just going to end up noise.

Photos of the Musical Instrument Museum of Brussels

The Musical Instruments Museum of Brussels