AMARAPURA, Myanmar (Burma) – Constructed entirely of teak, the Bagaya Monastery (Bagaya Kyaung) in the old royal capital of Amarapura has fared much better from the region’s earthquakes than its stone neighbors. 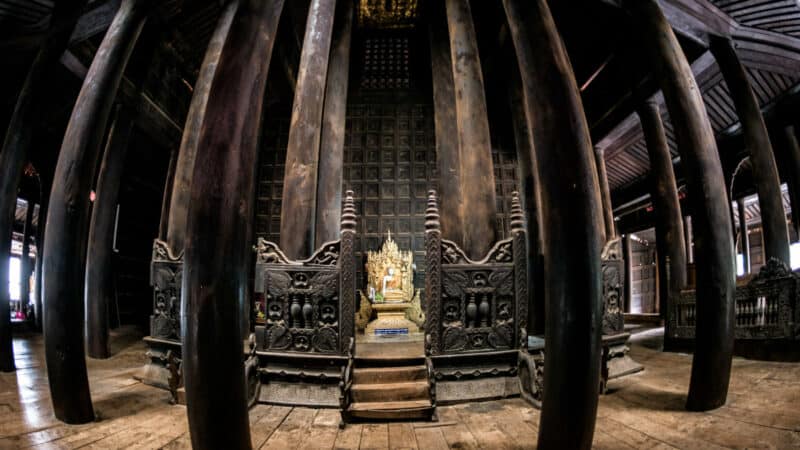 Since I was there, the situation in Myanmar/Burma has changed a lot. In February 2021, a military coup sparked widespread civil unrest and armed conflict.

The U.S. State Department currently advises: "Do not travel to Burma due to civil unrest and armed conflict." You can find their full travel advisory and security alerts here. And you can find the British Foreign Office's travel advice for Myanmar / Burma here.

It’s drafty and dark, and It feels like you’re walking around the deck of a ship. And there’s a good reason for that. The pagoda is made entirely of teak, a timber long prized in shipbuilding and boatbuilding. It’s held up by 267 massive posts of teak, the largest of which is 60 feet high and 9 feet in circumference. The floors and walls are also made of teak. Making this today would be prohibitively expensive even if you could still find solid teak trunks like this anymore.

The Bagaya Monastery (Bagaya Kyaung) was built in 1834 during the reign of King Bagyidaw. But it’s actually the second attempt–the original, which dated back to 1593, burned down in 1821.

Amarapura, just south of Mandalay City, was the royal capital of Burma during periods in the 18th and 19th centuries. It’s now no more than a township and has long been subsumed as part of Mandalay City. But it’s still quite rural, with what were once opulent stone pagodas and palaces destroyed by earthquakes and now overgrown.

The palace grounds are now mostly gone, but besides being surrounded by rice paddies now, Bagaya Monastery is still in full working condition, albeit sparsely inhabited. Being constructed of wood was a curse when it came to fire, but it has proved a virtue for surviving the earthquakes like the one in 1838 that destroyed nearly all of the royal palace nearby, leaving only part of the famous leaning watchtower.

Intricately carved wood inside and out are its main decorate; the main shrine is unusually modest. The layout of the central core is quite similar to the Shwenandaw Golden Palace Monastery in Mandalay City, but it’s much less ornate and isn’t entirely covered with gold leaf.

The main wooden structure remains in place. In the 1990s, the government added some stone steps and structure to help bolster it.

To get to the temple, you’ll first have to arrive at Amarapura, probably by boat. The most common and convenient way to get to the monastery is then by horse cart. Scooters might also make it, but could struggle in the muddy conditions. You’ll go past the leaning watchtower on the way, as well as some other old ruins.