What is now known as Reunification Palace in Ho Chi Minh City served as the home and office of South Vietnamese President Nguyen Van Thieu during the Vietnam War. 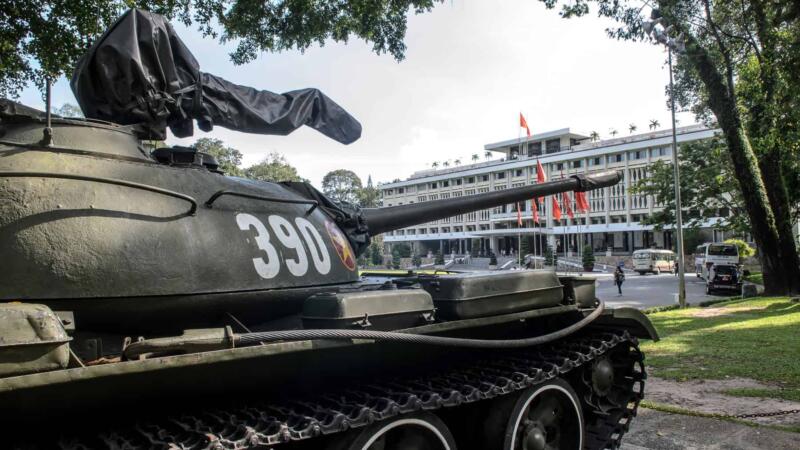 The palace isn’t used much anymore. It’s an historical relic of an era that ended only 40 years ago. And it was only in use for less than 8 years, between October 1967 and 21 April 1975. In the sprawling grounds are vivid reminders of how it all ended, with a tank crashing through the front gate and bringing the Vietnam War to an end.

From the outside, it’s hard to guess the building’s purpose, although simply by its size and the spacious lawns in an otherwise cramped Ho Chi Minh City, you can tell it was important. Designed by renowned Vietnamese architect Ngô Viết Thụ at the behest of then-president Ngo Dinh Diem (who didn’t live to see its completion), it’s a mix of Vietnamese modernist architecture. Inside, it’s a clash of contrasts.

The building served three primary purposes. In those, it was roughly analogous to the White House in Washington DC–it was both home and office for the president. In the basement are the stark, utilitarian corridors and cramped, windowless offices of the war rooms. Communications equipment lays scattered about, along with maps of the war’s progress, and even the very desk that Thieu used to bark out orders in failed attempts to reverse the revolutionary tide. There’s even the cot that Thieu used to sneak a short nap during hectic military campaigns.

The middle floors are state rooms, designed to impress visiting dignitaries and government officials with their show of style, opulence, and, by implication, power. Large conference and dining tables dominate meeting rooms decorated in a stylish mix of traditional and modern. Thieu’s official office suite is here. And there are also remnants of the kind of lavishness that the revolution was trying to purge. A sprawling games room has areas for poker and dominoes. A red velvet-lined cinema has seating for a couple of dozen guests and is outfitted with what was, at the time, a start-of-the-art commercial-grade projector.

The top floors–not coincidentally close to an aerial escape route on a helicopter that could land on the roof-top helipad–were the president’s family’s living quarters. Surprisingly spartan bedrooms surround an open rooftop courtyard decorated with an odd assortment of family keepsakes and gifts.

Also known as Independence Palace, these days the Reunification Palace is primarily a tourist destination, but it is occasionally used for official government functions.

Tours of the formal ceremonial rooms are guided. You can wander unguarded through other sections of the complex.