There’s not quite so much of the gold left that once covered the wood, but its ornately carved teak is arguably even more impressive. 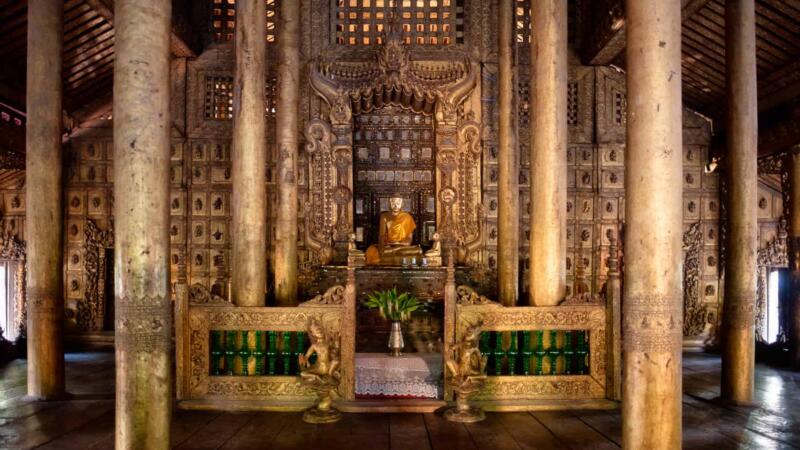 There’s not quite so much of the gold left that once covered the wood, but it’s ornately carved teak is arguably even more impressive.

Built in 1880 of carved teak, Shwenandaw Monastery was originally part of the imperial palace at Amarapura. About five years before the British arrived it was moved, in part because the king’s father had died in the building—you can still see the bed chamber where he died—and the new king preferred not to be constantly reminded of it. It now sits on a site near the base of Mandalay Hill, in the north of Mandalay.

It was originally the king’s private retreat. After he died, for a long time it was a monastery.

Its architectural style is traditional Burmese. Numerous solid teak tree trunks hold the structure up off the ground. All of the monastery’s interior is also constructed from teak, from the massive floor planks to the walls and the ornate decoration. The outside now looks blackish, but it was originally covered in gold leaf. You can still see the gold leaf lining the walls and ceiling inside. And there’s no electrical wiring or air conditioning here–it’s all natural light and fresh air ventilation.

The central structure is quite similar in overall structure and layout to the teak monastery of Bagaya Kyaung that’s still in Amarapura, though the Shwenandaw Monastery is much more ornate and, well, golden.

While it’s no longer a functioning religious site, it once was. So you’ll still have to take your shoes off.