The Standing Stones of Hintang

While the standing stones of Hintang in northeastern Laos don’t inherently convey the kind of majesty of Stonehenge or Easter Island, their mysteries remain just as deep. 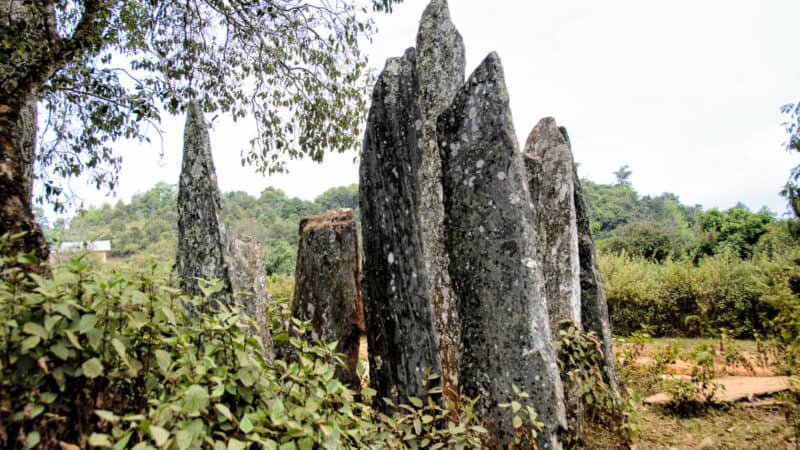 No-one is quite sure who put them here or why. The standing stones of Hintang (or menhirs, if you want to be technical) aren’t nearly as grand as their cousins like Stonehenge or Easter Island. And they’re even overshadowed by the nearby jars that give the plain its name.

That they’ve attracted relatively little scholarly interest has little to do with their archeological significance and everything to do with their remoteness–at least for western archeologists–and the very real dangers of studying them.

The first–and really, only–archeological work on them was done by French archaeologist Madeleine Colani in the 1920s and 1930s. In her 1930 book, the 600-page, 2-volume, The Megaliths of Upper Laos, Colani provided the first archaeological study of the region’s ancient history.

But then the region became enveloped in civil war, with the French eventually abandoning Indochina. Then came what’s known here as The American War. While the focus of the fighting was across the border in Vietnam, American bombs rained down on the Plain of Jars. Over a period of 9 years, from 1964 to 1963, American bombers dropped something like 2 million tons of explosive ordnance on Laos in the course of about 580,000 bombing sorties. That’s an average of one bombing mission every eight minutes, all day and all night, for nine years. Most of it was over the Plain of Jars.

That any of the archeological sites survived at all is something of a miracle. Like entire villages that were wiped out by the bombing, some of the sites documented by Colani don’t seem to exist now.2 And when you see the deep craters that pockmark Laos and parts of southwest Vietnam, it’s easy to understand why.

But the bombing campaign is a horrible gift that keeps on giving. If all of the bombs that were dropped had exploded on impact, the destruction would have been immense, but it would have been in the past. But up to 30 percent of the bombs dropped did not explode, turning bombing targets into minefields. And that has created a deadly legacy for Laos of horrifying proportions. Even today, a person is killed nearly every day in Laos from unexploded ordinance. Nearly half of those killed are children.

In a more narrow sense, the unexploded ordinance (or UXO) problem has also kept archeologists away. Going poking around with shovels in the Lao wilderness isn’t the smartest idea with so much UXO lying around, hidden by nearly half a century of undergrowth and soil. As a result, little work has been done on the archaeological sites of northern and eastern Laos since the 1930s.

The standing stones at Hintang are spread across at least three sites. They feature jagged, flat stones standing vertically, each about 6 feet tall. At ground level, deep holes are covered with flat, round covers, some of which have been removed.

The sites are now quite overgrown, and any remains or artifacts that were presumably in the holes have long since disappeared, perhaps from looting. (Colani did find some artifacts in the jars nearby.2 Some of the standing stones have been knocked over or have fallen over. If there were once any markings on the stones, the elements have worn them away.

While the standing stones of Hintang don’t inherently convey the kind of majesty of Stonehenge or Easter Island, their mysteries remain just as deep.

This is not a major tourist site and is not signed. You really need a guide to show you where it is. There are no signs or a visitor center or any other facilities.

The Standing Stones of Hintang