NORTH STRADBROKE ISLAND, Australia — Known to the locals as “Straddie,” North Stradbroke Island near Brisbane separates southern Moreton Bay from the Pacific Ocean. With miles of spectacular ocean beaches and an abundance of local marine life such as whales, sharks, turtles, and dolphins, it’s a popular summer holiday destination and yet still manages to feel remote. 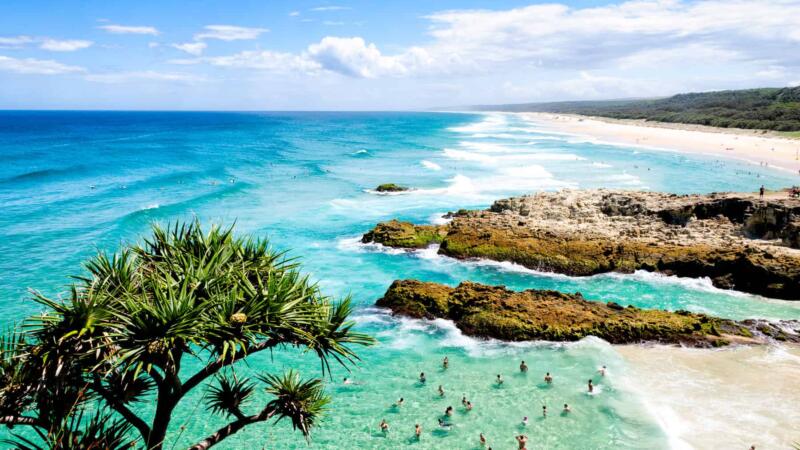 In a part of the world blessed with some of the world’s most stunning beaches, Queensland’s are among the best. And this is an island of sand—the second-largest sand island in the world, as it happens, only beaten by Fraser Island, which is a bit to the north and harder to get to.

The only way there is by boat–there’s no airport, and there’s no bridge. There is a regular car ferry from Cleveland and Redland Bay.

As you would hope for open ocean, marine wildlife thrives here. Dolphins play in the surf, whales come in nearby regularly each year, prompting an annual pilgrimage of whale watchers at Point Lookout, sea turtles come in near the rocky headlands to feed, and yes, there are sharks—quite a lot of sharks, actually. Great Whites cruise the coast, and herds of bull sharks venture into the passage between Stradbroke and Moreton islands to the calmer, western side of the island. The Amity Island in Jaws was a fictional place, but the real Amity Point on Stradbroke Island has, unfortunately, been the site of some horrific recent shark attacks. But as much press coverage as those attacks generate, they’re rare, and common sense offers excellent protection.

For the most part, Stradbroke remains a fairly anonymous and low-key holiday destination with some spectacular beaches, but there’s one thing above all others that puts it on the global news from time to time: sharks. Every now and then, it makes global news for that oh-so-Australian news story the latest shark incident like this amazing shot of a huge bite taken out of another great white or these swarming sharks.

There’s no airport or bridge. The only way there is by boat (or a very long swim.)

Your best option is to take a car across on the car ferry from Cleveland or Redland Bay. Without a car, it’s quite a bit harder to get around—the ferry drops you off on the bay side of the island in Dunwich, which, while pleasant enough, doesn’t have the long surf beaches of the ocean side. But whatever you do, don’t try to drive there, even if your GPS says you can. That stuff that looks like water is water. Really.