Trinity Church, The Church at the Bottom of the World

KING GEORGE ISLAND, Antarctica — Trinity Church is not the only church in Antarctica, but it may well be the most elaborate. 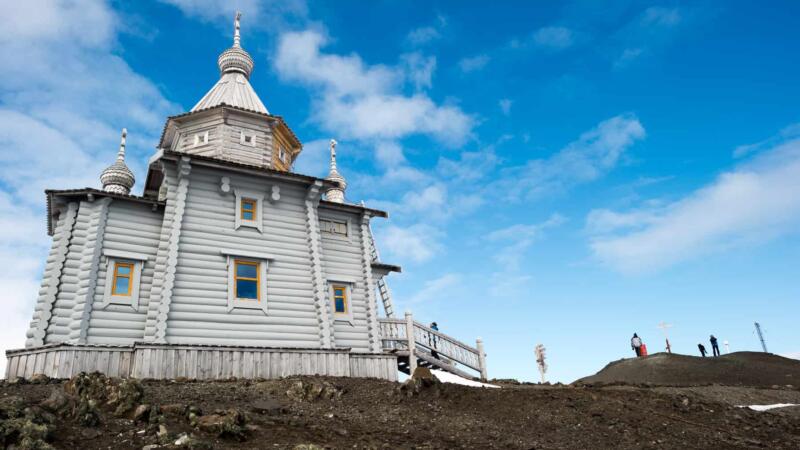 Trinity Church is not the only church in Antarctica, but it may well be the most elaborate.

Featuring ornate iconostasis that you might expect to find in Russia but is oddly out of character with all the other boxy, utilitarian, prefabricated buildings on an Antarctic scientific research base, it’s a Russian Orthodox church–the world’s southernmost eastern orthodox church–on Russia’s Bellingshausen Station on King George Island in the South Shetland Islands.1 It’s located on a rocky outcrop separate from but overlooking a cluster of research bases.

Amongst hard-core Antarcticans, King George Island is regarded as a bit of a beach holiday. It’s outside the Antarctic Circle (but within the Antarctic Treaty Zone) and right on the northern edge of the winter sea ice shelf. While it still gets plenty cold and windy, especially in winter, it’s generally not as harsh or as iced-in as some of the higher latitudes.

But even in these conditions, just getting to the church itself takes a bit of effort. There’s no protected tunnel access here or even nicely plowed paths–you have to walk up the hill, trudging through the deep snow. That can’t be a lot of fun during a winter blizzard.

As you can imagine, building a church–or building anything, for that matter–in Antarctica is a bit more complicated that your run-of-the-mill construction. You can’t just duck down the road to the local building supplies place to pick up the wood or chop down some nearby trees. And you have to be prepared to work in whatever windows of good weather present themselves.

The story of the construction of Trinity Church starts sometime in the 1990s, when discussions about building an Orthodox church in Antarctica started gaining momentum. By 2000 a plan was in place.

The new church was intended to have two objectives: firstly, to server as a tribute to those who had played a role in exploring Antarctica, especially Russians Fabian von Bellingshausen, his deputy, Mikhail Lazarev, and Russians who had died in the region; and, secondly, to provide a place of worship for residents of any of the nearby research bases.

The church was designed and built of Siberian cedar and pine in Altay village in the Kyzyl-Ozek region of Russia in 2002. Once completed, it was dismantled, loaded onto trucks, and driven to the Polish port of Kaliningrad and put aboard the Academician Serge Vavilov for the trip south to King George Island.

Once in the Antarctic, the church was installed on a sturdy concrete foundation during 2003-04, and church bells were constructed. Special steel braces secure the roof to the foundation, running through the nave, to help the structure withstand winds of up to 90 miles an hour (up to 80 knots).

The church was consecrated on February 15, 2004, by the Bishop of Sergiyev Posad and the Namestnik of Troitse-Sergiyeva Lavra. They, along with a group of other clerics, pilgrims, and sponsors, traveled to King George Island for the occasion. As the divine liturgy was underway the clouds parted briefly to allow the sun to shine directly on the church. Some of those present took it as a fortuitous “little miracle.” And for the first time in history, church bells rang out in Antarctica.

Two Orthodox priests are in residence year-round, and the church can house a congregation of about 30. If you’d like to visit the Trinity Church but Antarctica is a bit too far away, there’s apparently a full-size replica in Valday, Russia.

Trinity Church is part of Bellingshausen Station, one of the few stations on the Antarctic Peninsula that has an airstrip that (specialized) commercial jets can use. So some tourist expeditions use it as a way to do a fly-sail trip that only involves crossing the Drake Passage one way by ship.

Trinity Church, The Church at the Bottom of the World