Wordie House, An Antarctic Home Very Far Away from Home

It must have felt like winter was never going to end for the men who signed up to go to the icy end of the earth and found themselves at Base F. 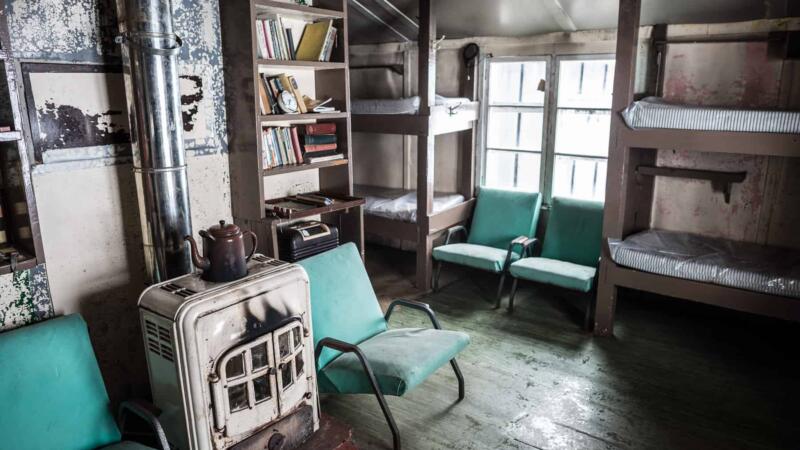 Candidates, SINGLE, must be keen young men of good education and high physical standard who have a genuine interest in polar research and travel and are willing to spend 18-30 months under conditions which are a test of character and resource.

It must have felt like winter was never going to end for the men who signed up to go to the icy end of the earth and found themselves at Base F.

They no doubt thought they were signing up for glamorous adventure–exploring new lands, testing themselves against the most forbidding environment on earth, following in the pristine snowy footsteps of epic adventurers like Scott, Amundsen, and Shackleton.

And yet once they got there they found so much of their time taken up with the mundane–feeding the dogs, repairing the sleds, measuring the speed of the relentless wind and logging the temperature on a strict routine, keeping the huts with their thin wooden walls and uninsulated roof in one piece, just trying to keep warm and stop from going stir crazy. And waiting months for the sun to appear again.

Their mission had two objectives. The first was to explore and chart new territory. Fittingly, the mission had an innocuous-sounding acronym: FIDS, for Falkland Islands Dependency Survey, a name that implied scientific aspirations beyond reproach. But their mission had a second, and more important, objective: strengthening Great Britain’s claim to this contested land.

Who owns Antarctica? The answer isn’t as straightforward as you might expect, and the story makes for fascinating reading in David Day’s Antarctica: A Biography (2013).

FIDS had its origins in a secret World War II mission code-named Operation Tabarin that ran from 1943 to 1945. It was set up by the British Navy to secure a presence on the Antarctic Peninsula to stop the peninsula itself and Drake Passage from falling into enemy hands. They were also tasked with removing rival marks of sovereignty (which is to say they were to remove any plaques left behind by other countries and installing their own “British Crown Land” signs), maintaining a naval presence in the region, and supporting exploration expeditions deeper south into Antarctica. Despite the severe budget shortfalls of wartime Britain, Prime Minister Winston Churchill authorized the operation largely because of fears that Argentina might threaten British interests there, and that that might, in turn, benefit Nazi Germany.2

Operation Tabarin was created in December 1943, when the first party set out from the United Kingdom. The first bases were established on Deception Island in the South Shetlands and on Goudier Islet in Port Lockroy. Originally they had hoped to also establish a base on the mainland, but they lacked a suitable ship to supply a base there. When that was rectified in February 1945, a new base was set up at Hope Bay on the extreme north of the peninsula.3

Rather than simply abandon the bases after the war, in 1947 they were repurposed to scientific activities, transitioned from military to civilian operations, and put under the responsibility of the Colonial Office.

— Instructions to the FIDS base commander in 1947.4

And other bases were built. One of them, Base F (also known simply as ‘Argentine Islands’), was built in January 1947 on Winter Island in the Argentine Islands on the site of an earlier British Graham Land Expedition of 1935-36, a building that was destroyed in 1946, possibly by a tsunami.

Base F was primarily a meteorological research station. Its residents were charged with recording weather conditions and improving weather forecasts, something that was crucial in supporting the mission of the sledding and aviation bases elsewhere on the Antarctic Peninsula. The planes were a crucial innovation–a plane might get further in an hour than a sledding team in weeks–but they were extraordinarily sensitive to the vagaries of the notoriously fickle and dangerous Antarctic weather.5

In May 1954, Base F was replaced with a more modern research complex on Galindez Island, a neighboring island connected to Winter Island by sea ice. The new meteorological base was initially also known as Argentine Islands but in 1977 renamed Faraday Research Station (the base became famous for first detecting the hole in the ozone layer). In 1996, Faraday Research Station was sold to the Ukrainians for the princely sum of one pound and renamed Vernadsky Research Base, a station that remains operational today (and is most famous to tourists for its bar and home-made vodka).6

The historic building of Base F survives. It’s now known as Wordie House, named after James Wordie, Shackleton’s chief scientist on the Trans-Antarctic Expedition of 1914-17 and who later helped oversee the consolidation of FIDS’s scientific activities. It’s a short walk across the sea ice from Vernadksy Research Base.

It’s one of six historic sites from FIDS’s western Antarctic Peninsula bases being restored and maintained by the British Antarctic Heritage Trust.7

But this isn’t some stale museum piece. Many of the supplies of the day remain as they were when the building was abandoned in the mid-1950s, making for a time capsule monument to the history of exploring Antarctica.

When originally constructed in 1947, the building was made up of a kitchen and bunk room that housed 4 to 5 men at any time. At the center of the room is a wooden stove, which along with the kitchen stove just behind it provided the building’s heat. Bunks line walls on two sides. A kitchen takes up one end of the room. Bookcases with books and board games hint at the constant struggle to stay occupied for the months at a time when the view out the windows was simply more snow at night. In 1951, the complex was extended to add a generator shed, office, store, and toilet.

The kitchen is still stocked with canned coffee and canned mashed potatoes, along with jars of Marmite. The workshop has the oils, lubricants, and even old Kodak developer powder that the residents used. Inside you can find old radio equipment carrying the FIDS logo. And in twin reminders of how fragile their new wooden home was to both cold and fire, near the door you’ll find a carefully maintained handwritten log of how much of the coal ration had been used as well as gas masks and breathing apparatus to deal with any fire that might break out.

Wordie House gives a real taste of what it must have been like for its residents to live and work here in this inhospitable but scenic place, cooped up inside for months at a time.

Access to Wordie House is via Vernadsky Research Base, and it’s still a bit of a hike from the base (about 20-30 minutes or so). It’s a hike you’d only do with an experienced guide, because it’s very possible for there to be dangerous cracks in the ice, and it’s quite likely you could get lost. But this being Antarctica and the only way to get anywhere is with experienced guides, that’s not really negotiable anyway.

Wordie House, An Antarctic Home Very Far Away from Home