Smartphone Apps for Tracking the Sun, Moon, and Stars

Whether you’re trying to make it for magic hour, line up the sun or moon with a landmark, or just want to make sure your subject is shown in the best natural light, smartphone apps that calculate the location of the sun and moon for any location on earth for any date and time can come in very handy. 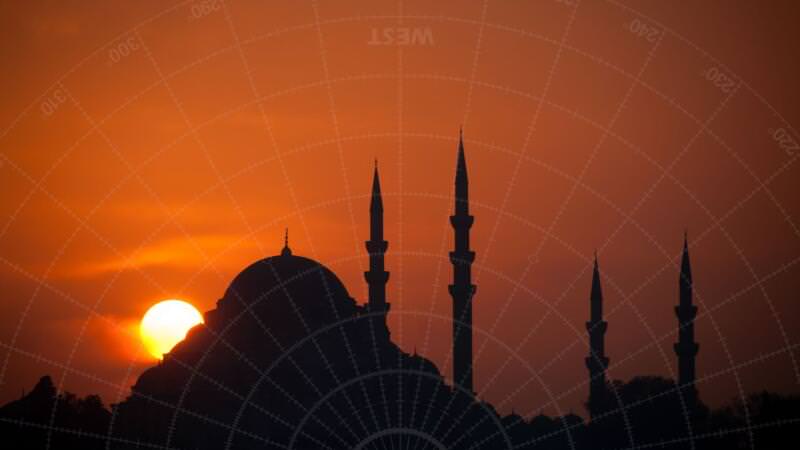 Knowing where the sun will be is very handy for outdoor location photographers. Landscape photographers might want to find the best spot for a dramatic sunset shot (or not, if you’re going for something more subtle), or perhaps for lining up the sun with a landmark. Architectural photographers might want to know where the shadows are going to be. Even an outdoor model shoot will want to know where the best natural light is going to be, when. Or maybe you’re trying to map out the movement of the sun during a timelapse or shooting the moon or Milky Way at night. For all of these, there are smartphone apps that can help immensely.

Predicting where and when the sun will be when isn’t new, of course. But it used to involve tables of data and complicated calculations using almanacs, and inevitably, a bit of guesswork. These days it’s infinitely easier thanks to those powerful little computers that so many of us carry in our pockets.

There are now smartphone apps that can calculate the elevation and angle of the sun and moon (and some, of the Milky Way and other constellations) for any location on earth for any date and time.

They go far beyond just telling you what time the sun will rise, what time it will set, and what the phase of the moon is. They can use your phone’s GPS to pull data for your precise location. They can show you map views with data overlays in tandem with your phone’s compass so you can line things up. And some can even use your phone’s camera to provide an augmented reality, heads-up display in real-time.

There are a bunch of apps in this category, and some are better than others. Here’s a roundup of some of the best. The ones I’m focusing on here are all designed with photographers and videographers in mind, rather than budding astronomers (which is a whole different universe of apps), and their features reflect that.

The Photographer’s Ephemeris, or TPE, is the granddaddy of sun and moon tracking apps, and its desktop version was one of my favorites long before smartphone apps existed. It was one of the first to make use of the endlessly useful tools that build on what was then the newly launched Google Maps and Google Earth. Over the years it hasn’t changed all that much, but then it hasn’t really needed to because it got so much right from the get-go.

The core functionality lies in augmented maps that show information about the sun and moon–and now constellations as well–overlaid on maps. It doesn’t have the newer live view features that make use of the camera, but it does have some intriguing new and unique features. They’ve partnered with Skyfire for a plugin for TPE that helps predict where the when the best sunrise and sunset color will happen based on a bunch of different weather data points (it’s a paid plugin with a 30-day free trial). And there’s a companion app, The Photographer’s Transit, designed to help landscape photographers plan for the field of view of a specific lens.

It’s available for IOS, Android, and desktop via a web app. 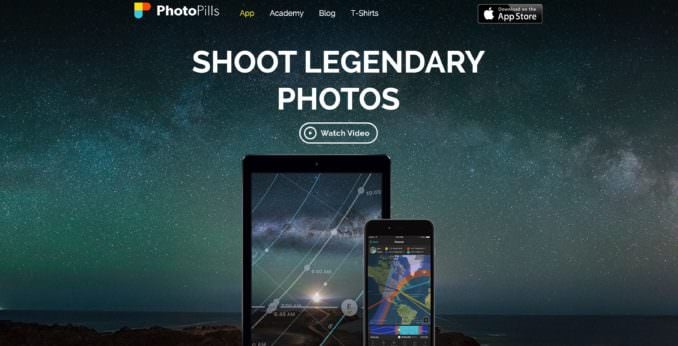 This is my current favorite. PhotoPills takes the kitchen sink approach by adding a bunch of other features useful to photographers like timelapse interval tables, depth of field calculator, and star trails simulator. That’s in addition to sun and moon calculators and live view/augmented reality. Despite this everything goes approach, the package is slickly executed and logically organized, and it’s well worth a look. It was originally available on iOS, but they’ve since made an Android version. It is my current favorite.

Sun Surveyor pitches itself as “your personal guide to the sun and moon,” and of the apps with augmented reality overlays, this is my favorite. Its interface puts emphasis on visualization rather than raw data, which I find very useful.

One unique feature of Sun Surveyor’s live view is that not only does it offer the option to make use of your phone’s camera, but you can also see the overlays over Google’s Street View for other locations. So you’re not limited only to using it from where you’re currently standing but can also plan ahead to where you plan to be.

Sun Seeker puts heavy emphasis on its 3D augmented reality view–otherwise known as live view–that overlaps sun, moon, and other celestial body paths over the view through your phone’s camera so you can see exactly what will be where, when. It also provides all manner of other related data tables. My only quibble with this app–and it’s a minor one–is that it’s interface isn’t as clean and clear as it could be. Otherwise, it’s a good alternative to Sun Seeker of you want live view but prefer your apps to have a more focused purpose.

Helios was one of the best of the early sun and moon tracking apps, with a level of detailed data that wasn’t readily available initially among many of its competitors. It’s still a slick and eminently capable app, but it’s starting to show its age a bit in lacking newer features like live view. Despite that, its price has remained stubbornly high in comparison to its competitors–it’s three times the price of the next most expensive app in this list.

It’s available for IOS at the comparatively steep price of $29.99. 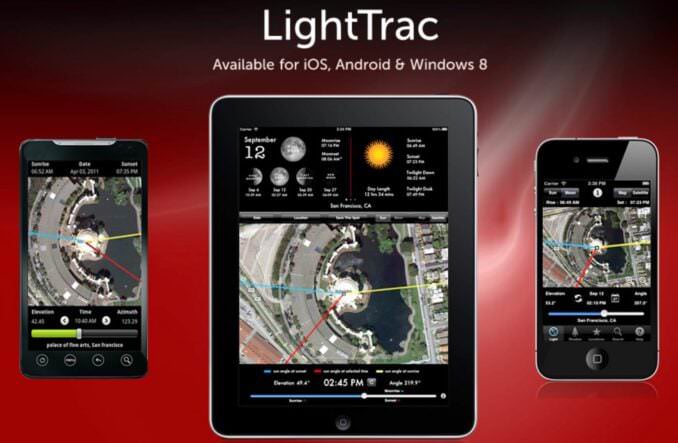 Compared to some of the other apps here, LightTrac is a little more sparing with its data. Its core feature is a satellite view overlay showing the sun rise and sunset angles as well as the angle at certain times of the day. One of the useful functions I like is that it can calculate the length of shadows for an object like a tree or building of a specified height (The Photographer’s Ephemeris and Sun & Moon also have this function). 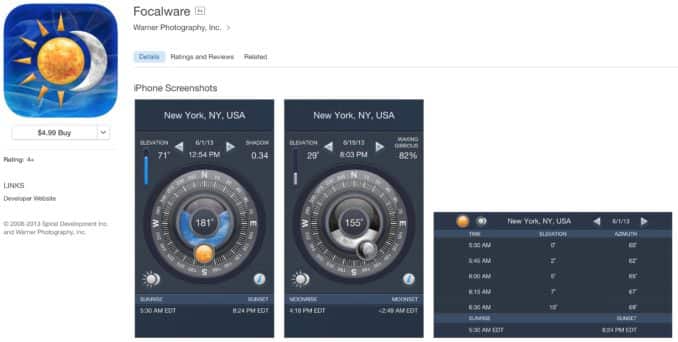 It doesn’t have all of the bells and whistles of some of the more sophisticated apps here, and the interface isn’t to my personal taste, but the functionality of Focalware is solid and it’s more than capable in telling you where the sun and moon will be at any given time and location.

There’s also a free lite version that is limited to only your current location and doesn’t support magnetic declination.

With live view, clearly laid out data visualizations, dynamic compass view, weather forecasts, and a shadow calculator, among other features, this app is packed with useful features without going overboard and introducing clutter.

Its basic version is free, but there’s an in-app purchase for $4.99 if you want to upgrade to the pro version to unlock more features and remove the ads at the bottom of the screen. It’s available for IOS. 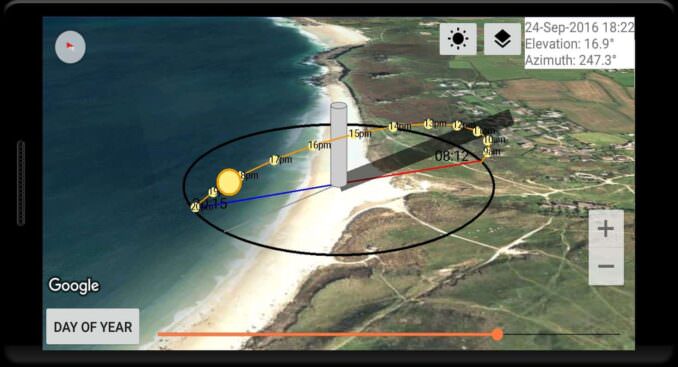 Sun Locator has many of the same kinds of features as other apps in this list, but something that stands out with this one is its sundial view that helps with predicting the length of shadows. You can see an example of it in the shot above.

There’s a free Lite version and a paid Pro version. It’s only available for Android. 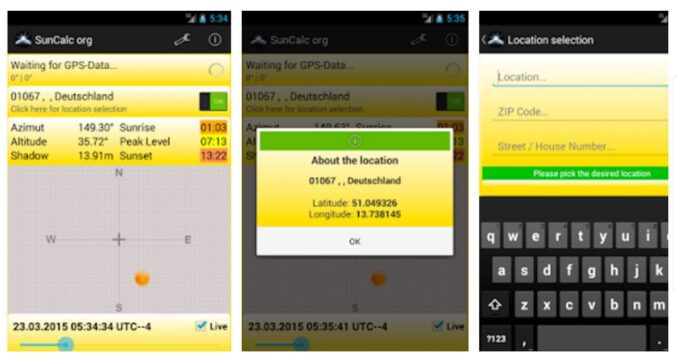 The SunCalc Org app is really a stripped-down companion to a much more feature-laden website, suncalc.org. It doesn’t have the polish of some of the other apps and lacks some newer features like live view, but if you’re after something basic and are happy with a more manual approach, it works effectively.

Suncalc, it turns out, is a popular name. There’s another app called SunCalc that is a scientific calculator. There’s also another website called suncalc.net, which is an online javascript that does track the sun but is much more basic. The one related to tracking the sun is called SunCalc Org.

It’s pretty remarkable the kind of information and tools we now have in our pockets, and apps like these can remove a lot of the trial and error from trying to get the shot we visualize. Now, if only they can start doing something about the weather…

Smartphone Apps for Tracking the Sun, Moon, and Stars