The RAVPower FileHub is like a digital Swiss Army Knife, solving several connection and networking issues that you commonly run into when travelling. 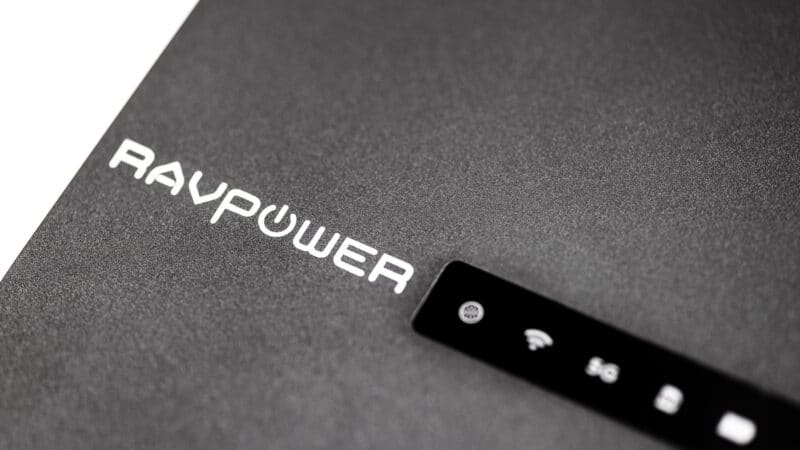 There’s frankly an awful lot of overlap between the models, and they do many of the same things in the same ways. But there are a few key upgrades and additions since the original model.

The one I’m most excited about is a new button. Yes, I know that sounds a bit silly on the face of it. But here’s the thing: that button transforms this into an (almost) standalone photo and video backup device on the road and an interesting alternative to some of the others out there.

Overview of the RAVPower FileHub

So what exactly is the RAVPower FileHub? That’s not as easy to answer as it might seem. It doesn’t fit easily into a traditional category.

In broad strokes, the device is trying to solve several problems at once. The kind of issues you’re very likely to come across when traveling with a laptop. Trying to stay connected when you’re out traveling isn’t always easy. And carrying a bunch of different devices for specific jobs ends up with a lot of moving pieces, a lot of extra weight, and more things to go wrong. For all the promise of the cloud, you pretty quickly hit harsh reality when you’re traveling. Dodgy WiFi connections. No power outlets nearby. Nowhere to buy a cable with that specific connector you need.

The FileHub takes a kind of Swiss Army Knife approach. It’s pocket-sized, shaped a bit like a rectangular hockey puck. It’s a power bank, with a 6700 mAh external USB battery. It’s a travel router, acting as a WiFi network hub. It’s a file hub that allows you to share files from USB storage devices via WiFi. It’s a WiFi SD card reader. And, if you add an external USB storage drive into the mix, it’s a highly portable photo backup device.

The WiFi functionality is really to the heart of why this device exists. There are several aspects to it, but the first is that it acts as a WiFi hub or personal router.

The FileHub is also not a mobile hotspot. It doesn’t connect directly to cell networks. You could use it in tandem with a separate mobile hotspot, or use your phone as a hotspot, and then use the FileHub to share that connection among multiple devices. But you need to source the actual internet connection separately.

But being able to share a WiFi or ethernet connection across several devices can come in very handy. That can be useful in situations where you’re being charged per connection or when you’re trying to add a little boost to the signal to other parts of the room or building.

While that doesn’t solve the problem of slow internet connections, it does add convenience and can reduce internet connection costs for those places that still charge by the device. And if you’re getting a good WiFi signal in a different part of a room than where you want to sit–something that I find happens all the time in hotels, in particular– it’s a useful way to send the boosted signal.

And while I’m not a big fan of the File Hub’s user interface through a web browser, which you have to use to get it to log into the WiFi network, it’s functional and stable.

One thing this new version has that the original didn’t is an ethernet port. More than a few hotels offer the choice of a wired connection or a WiFi one, and I’ve often found that the wired connection can be much faster and more reliable than what is too often a flakey WiFi signal. Or, if you run into the less common situation of only having a wired connection available, you can turn that into WiFi.

And if you use the ethernet connection, it can act more like a traditional WiFi router.

Using that WiFi connection, you can put the FileHub in between your computer or phone and storage devices, basically turning those storage devices into your own little storage cloud.

The FileHub doesn’t hold any data itself, but it acts as a WiFi bridge between your phone or tablet and an external hard drive.

If you want to watch moves or browse photos from your tablet or smartphone without actually storing them on your tablet or smartphone, this can come in very handy because you can plug in a portable hard drive and effectively turn that hard drive into a wifi-enabled hard drive. I’ve found this feature also to be useful, especially for browsing photos. It’s a bit slow doing it over WiFi if you’re using large RAW files, and the web interface is a bit clunky, but it works.

To access most of these features, you’ll need to fire up the FileHub app (search for “rav filehub” on the Apple store or Google Play store; it’s free). You then have to connect your phone to the File Hub’s WiFi network. The SSID doesn’t always show up immediately for me. And it would be even better if it used a combination of Bluetooth and WiFi to make the connection process even smoother, as the newer GoPros do, but the old-school manual WiFi connection process works well enough.

The mobile app works well enough, even if it’s unlikely to win any design awards anytime soon. It gives you the functions and information you need. But it can also be a bit confusing. It’s not immediately clear, for instance, that the file management section access the storage device differently from the more limited Photos, Music, and Videos buttons (the latter is looking for files only in the “Share” folder, while the file management section accesses the whole drive). 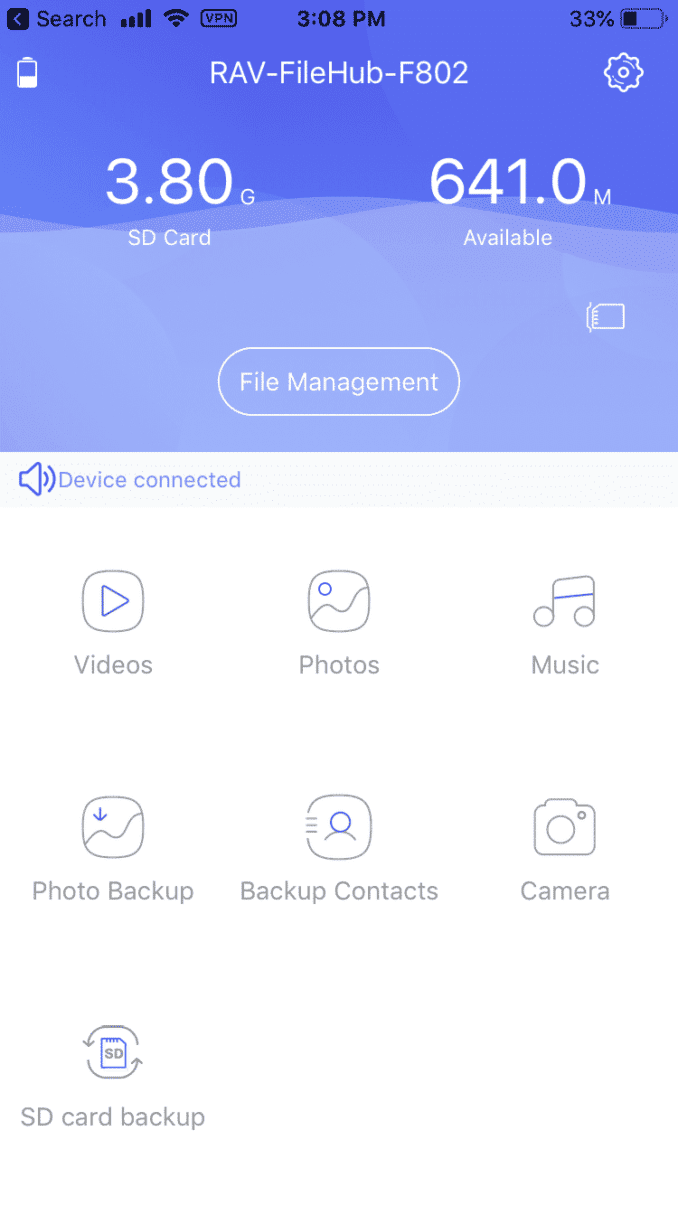 The RAVPower FileHub is also an external battery or portable USB power bank. It has a built-in 6700 mAh battery. You can use it to recharge your phone or tablet or provide external power to your GoPro.

It’s also important to know that the battery is used to power the File Hub’s own features, so if you’re using things like the WiFi functionality, you’ll be drawing down on that same pool of battery juice.

To connect it as a battery, you use a USB cable directly to your device and turn the FileHub on. Simple.

It works. It’s convenient. And while it’s a smaller capacity than I usually take with me, I don’t have any complaints about the battery pack functionality. In short, it’s handy to have, but it’s probably not the reason to buy this device.

There’s an SD memory card slot on the side. It’s a full-size SD slot that takes SD, SDHC, and SDXC cards. It has a UHS-I interface, which means you can still use a UHS-II card in it, but you won’t get the transfer speed benefits that UHS-II makes available. RAVPower says that it supports cards up to 256GB. I’ve tried a 400GB card in it and haven’t run into any issues.

Unfortunately, it doesn’t have a microSD slot–it would be great if it did. But If you need to backup from a microSD card, you can use an adapter cartridge, which is a pretty simple solution. Many microSD cards come with those cartridges included, but you can also buy them separately.

One of my complaints about the RAVPower FileHub original model was that working with the SD card reader and images, in general, was slow. Much of that was because you needed to connect a mobile app to do anything. All of the copying functions were only available through the app.

The new version adds a one-touch backup button.1 Insert your memory card, attach any USB storage device, and press the button.2 Simple. No need to fire up the mobile app to get the copying going.

The SD card icon on the front of the device flashes while it’s backing up and goes solid white when finished. I’d love a little more feedback than that– there’s no way to confirm that the backup was successful without browsing the files on the external USB storage device, for example. Although to be fair, that kind of detailed information is available when you use the mobile app to run the process. 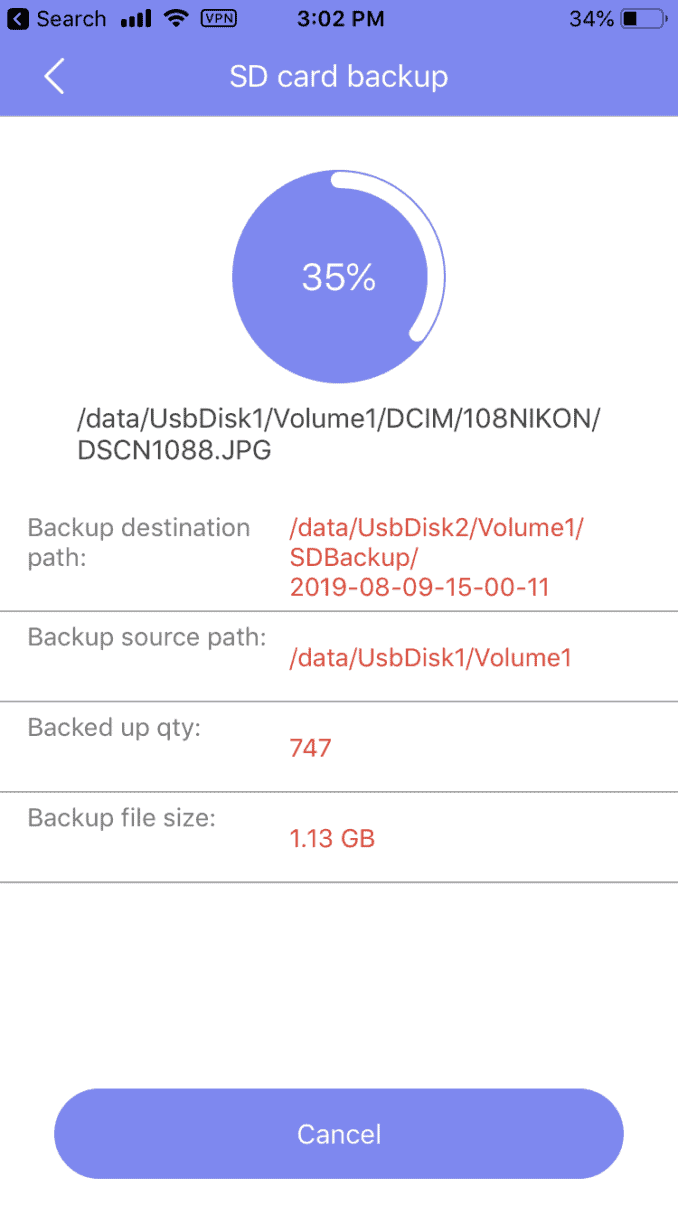 I’ve been using it with a Samsung external SSD. I wasn’t sure the FileHub would have enough power for the SSD drive as well, but it does, even with the FileHub running only on its internal battery power. I’ve also tried it with an older WD Passport HDD, and that worked fine too. You could also use a thumb drive if you prefer.

There’s another way you can use the FileHub: as a wireless card reader. With this method, you insert your memory card into the device and then connect your computer or phone/tablet to the FileHub via WiFi. It’s a pretty slow way to do it, and for full backups from the card, I prefer the speed and reliability of a more direct, wired connection. But if you’re just trying to pull off a couple of photos or video clips to share on social media, it’s a convenient feature to have. Many cameras these days come with their own built-in version of this, too, but if you’re shooting with multiple cameras, it can be simpler to use the one app and interface through the FileHub rather than a different set for each camera.

A minor quibble is that it’s harder than it needs to be to get the memory card in and out. It uses the usual spring-loaded mount, but it sits too flush inside the slot, and I’ve found myself taking a few goes each time to get it to pop out.

Photo Backup. This is different from backing up from the SD card. This backs up the photos in your phone’s photo albums to the storage device you connect to the FileHub. If you wish, you can then delete the pictures from your phone to free up space. The process is run through the mobile app.

Camera. Using the mobile app, you can have your phone’s camera save newly captured photos and videos directly to the USB storage device you’ve connected. I can’t think of many instances where that would be especially useful unless your phone is so short of storage that there’s simply no more room. But the feature is there if you want it.

Overall, I’ve found the RAVPower FileHub to perform well. It solves several problems in one small, highly portable device. But there are still some minor things I’d like to see:

I like to travel light, but I also have a bunch of electronic devices I need for my work. But each piece needs to justify its place in my pack. The FileHub has done that and replaced a couple of other devices in the process.

You can find them at Amazon. There are several models available. The latest model, and the one I’ve been using, is the RP-WD009.

Images and product information from Amazon PA-API were last updated on 2022-09-25 at 04:40. Product prices and availability are accurate as of the date/time indicated and are subject to change. Any price and availability information displayed on Amazon Site at the time of purchase will apply to the purchase of this product.