The WD MyPassport Wireless is a portable hard drive that can be used to stream media to mobile devices like iPhones and iPads. But it’s also a cost-effective option for backing up your photos while traveling.

But that’s not taking advantage of the signature features of this device. You can connect directly via wifi (or WPS, as the manual unhelpfully refers to it, standing for wifi protected setup), and stream movies, access files, use it as a DLNA media server, and perform other standard file operations using the free WD-supplied apps.

The wireless part appeals especially to iPhone or iPad users (or users of Android devices for that matter) that want to be able to access more storage than their device has built in. And there’s an internal rechargeable battery, making it very convenient to use while traveling or otherwise on the go.

There are other wireless hard drives out there, but something that sets this one apart is that there’s an SD memory card slot on the side. That’s something that’s of course of particular interest to photographers. It turns a wifi hard drive into a way to backup photos on a memory card without having to use a computer. And it’s that use that I’m focusing on here. I’ve been testing the best portable backup devices for photographers, and this is another in that series.

There are versions of the WD My Passport Wireless, one with 1TB storage and 2TB. I tested the 1TB version. Functionally they’re exactly the same aside from the amount of storage space. 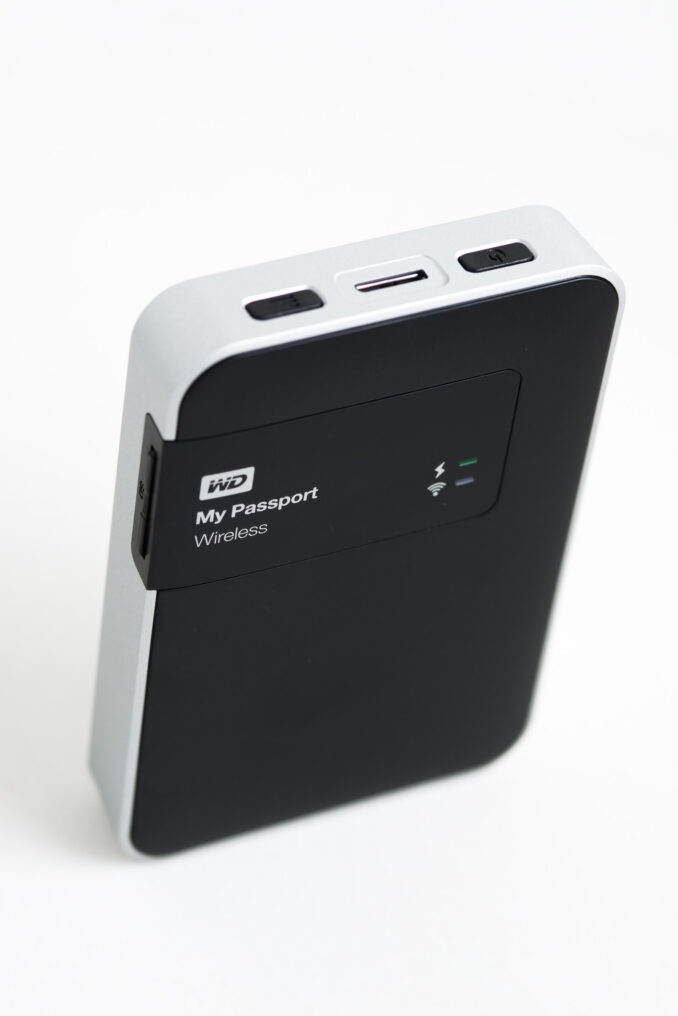 It only accepts SD-sized cards, so if you’re using CompactFlash or something else, you’ll want to look at other options.

SD, SDHC, SDXC. There’s an SD memory card slot built into the side of the device. It accepts SD, SDHC, and SDXC cards.

microSD. It doesn’t take microSD cards directly. But if you’re using something like a GoPro that uses microSD cards, you can easily use a microSD-SD adapter–they’re often included with many microSD cards, or you can pick them separately.

The device itself is mostly agnostic about file formats. You can copy photos, videos, or just about any file format from the SD card to the hard drive. That includes JPG, RAW, DNG, etc.

But the WD software that you use to browse the data on your mobile device or computer is more limited. It renders preview thumbnails for basic formats like JPG, but it doesn’t render previews for RAW files, including DNG. What you get is a question mark icon for an unknown file format. So you can see that there is a file there, but you can’t actually see a preview image of the photo. That’s likely a software limitation rather than a hardware one, and maybe it will be addressed in a future update to the WD software, but for now, the lack of RAW file support is a little disappointing.

There are two buttons on the WD My Passport Wireless–a power button and a wifi button. And there are two small LED lights–a power button that changes color to indicate how much charge is in the internal battery and an activity light that indicates wifi status and flashes white while it imports data from the SD card. The LEDs can also indicate other things with different colors, including blue for the wireless connection, orange for share connection mode, red for failed connection, and blinking white for the device performing an operation like copying from the memory card, updating the firmware, or resetting. 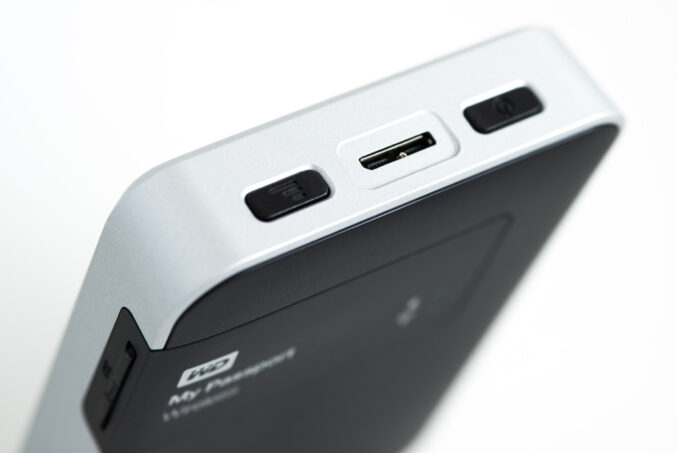 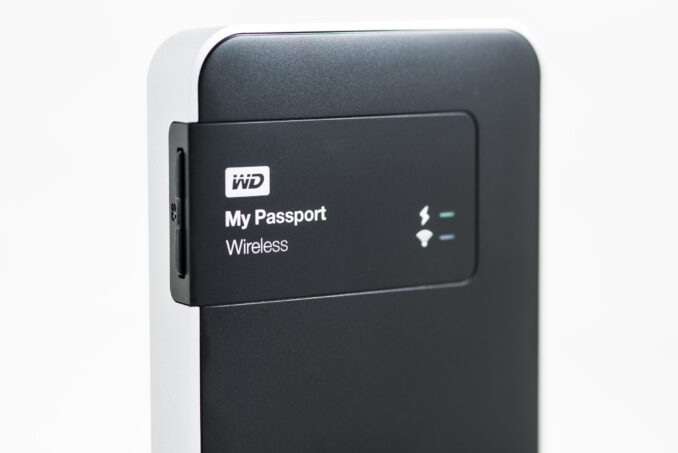 There are three ways to start the process of copying data from the SD card to the hard drive. The simplest way by default is to insert the SD card and press the WPS button (i.e., the button that’s not the power button). That will begin the copy process, and the indicator light will flash white while it’s working. Once it’s done, it just stops the operation–there’s no confirmation that the process was successfully completed.

The second option to start the copy process is to use the WD My Cloud wireless app. With the app, you also have the operation of doing a move process instead, which deletes the data from the memory card as part of the operation (although you’re always better off reformatting the memory card in your camera rather than in a computer or other device).

A third option is to set it up to automatically import photos and videos from the SD card when you insert the memory card. To set that up, you need to go into the app and turn on the setting for automatic import. You can also set it to automatically delete the files on the memory card after they’re imported, but again you’re better off doing that in your camera. 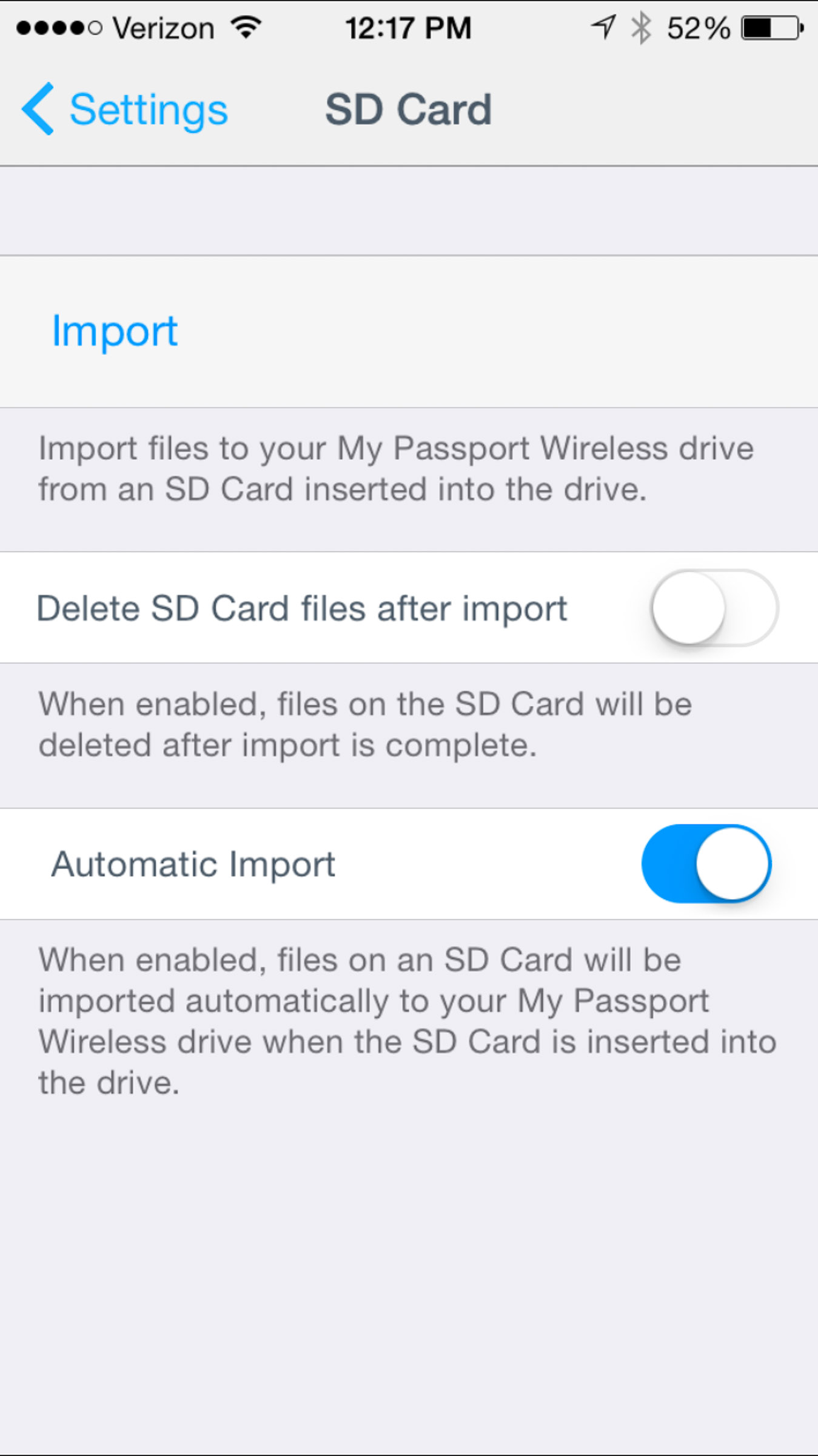 The WD My Passport Wireless doesn’t have a screen, and the two LED indicators are pretty basic, so if you want to confirm that the data imported correctly, you’ll need to connect wirelessly and use the app. 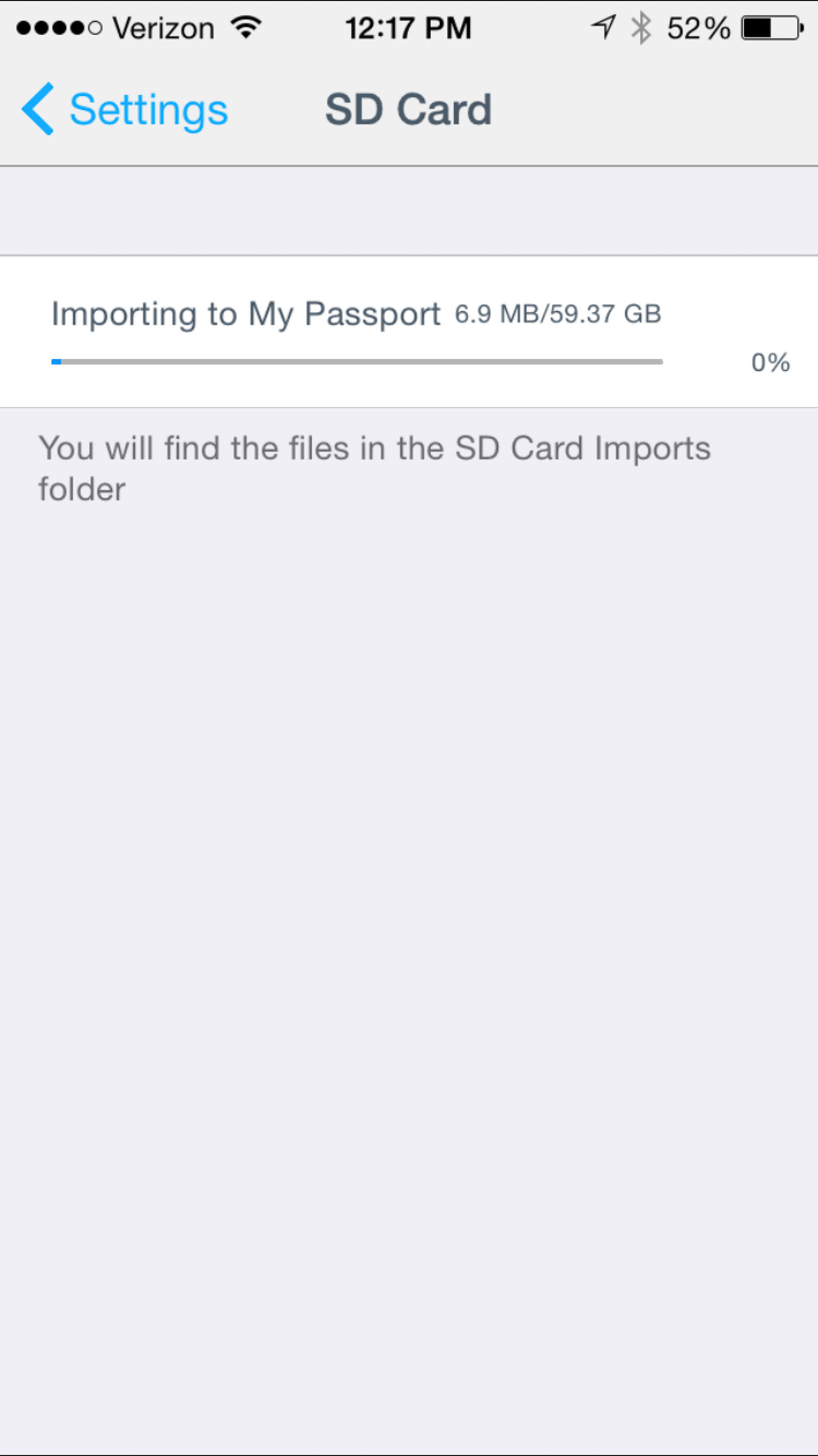 With the app, you can browse the data on the drive and perform basic file operations. It automatically generates preview thumbnails for basic image formats like JPG, but it doesn’t render previews for RAW formats like DNG, NEF, or CRW. You can confirm the files are there, but you can’t get a visual preview of the image. 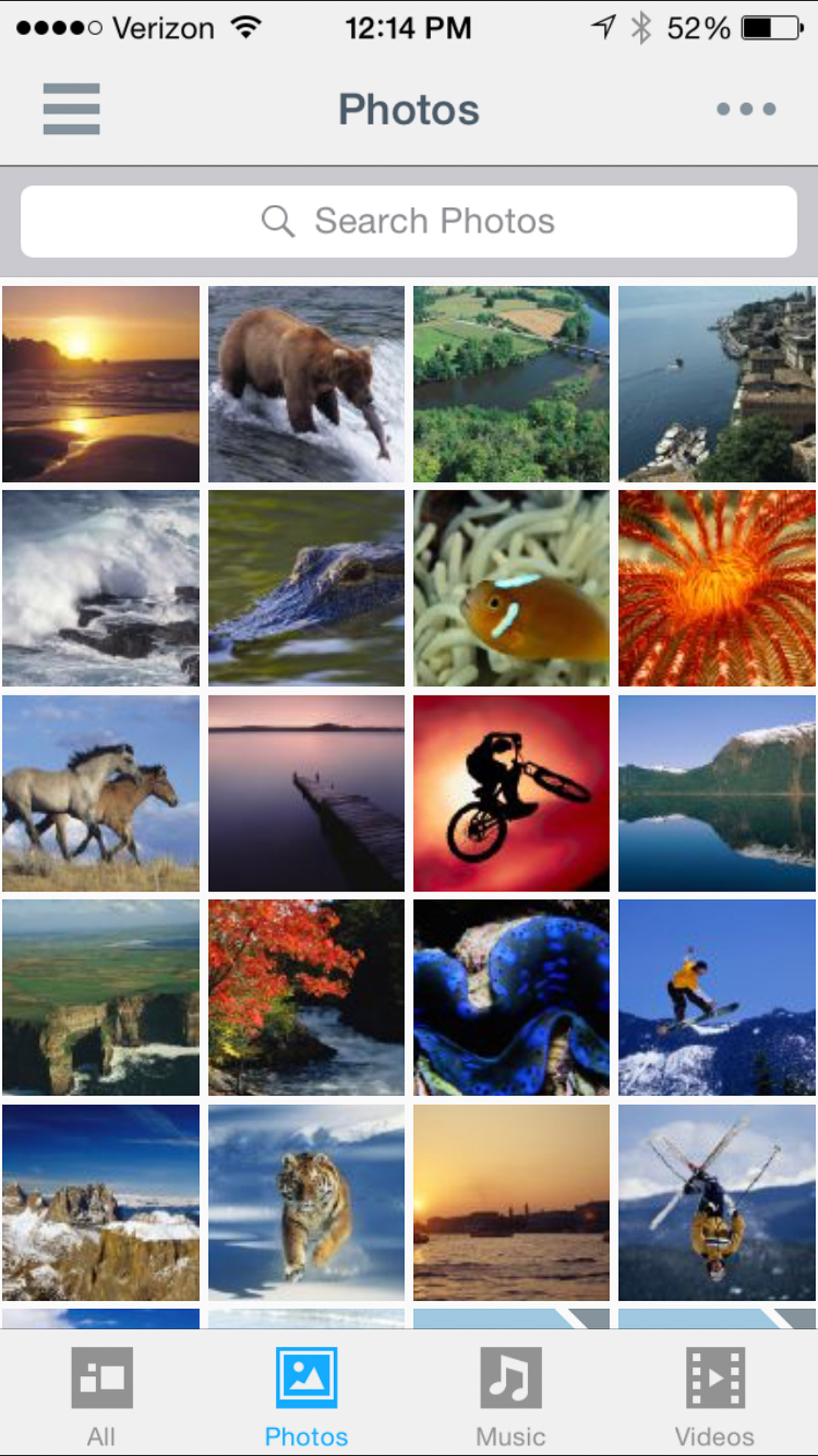 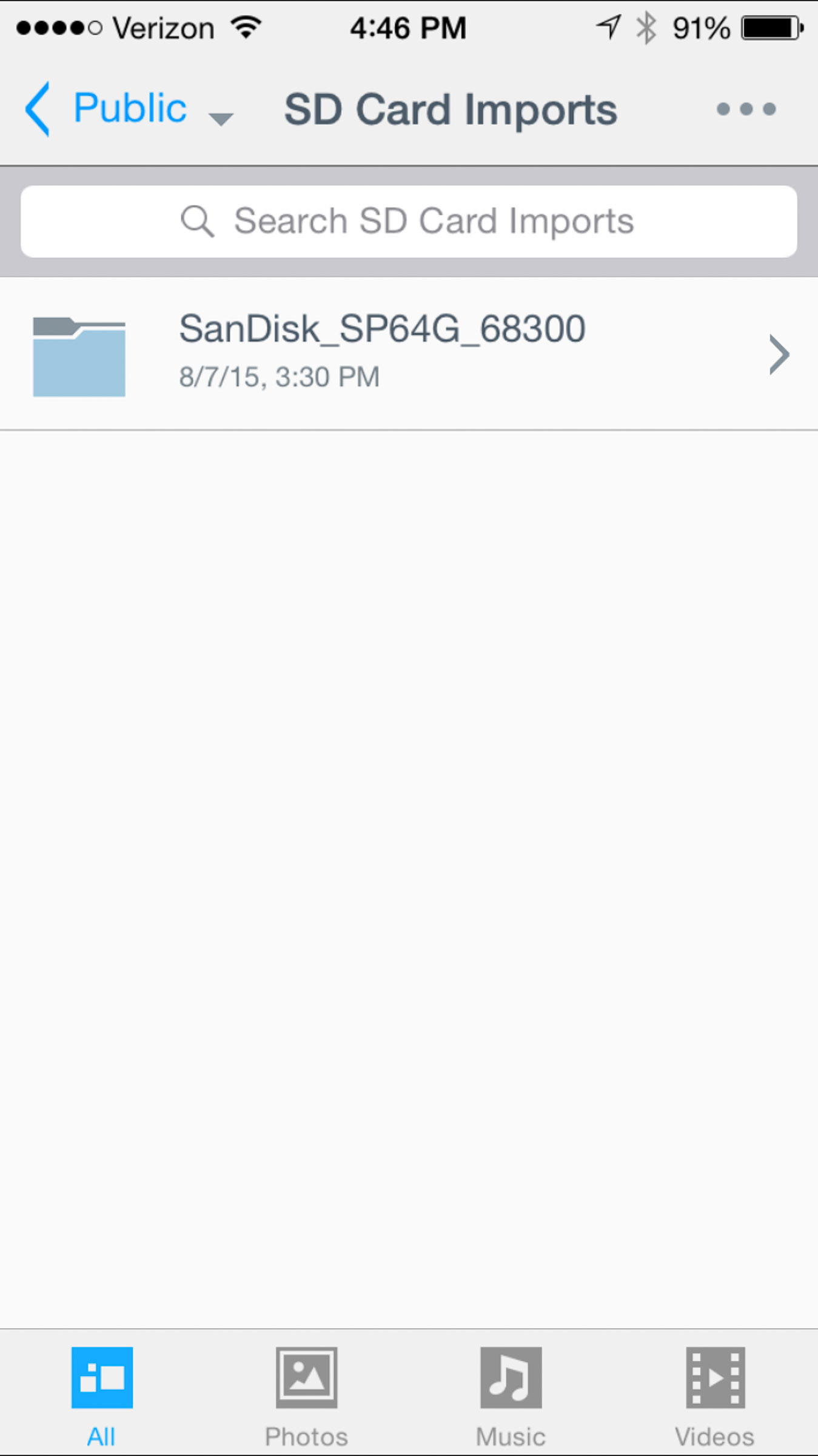 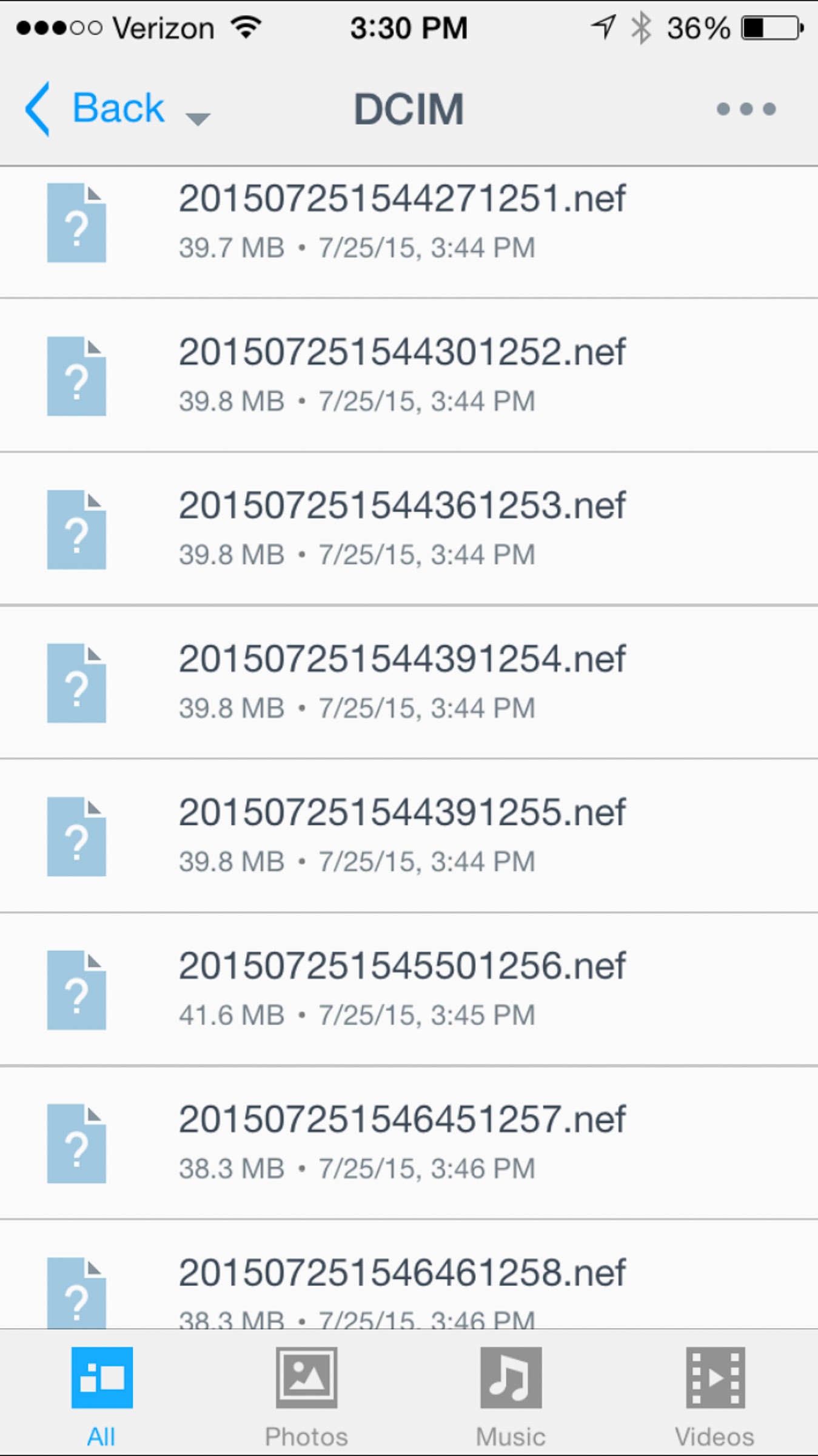 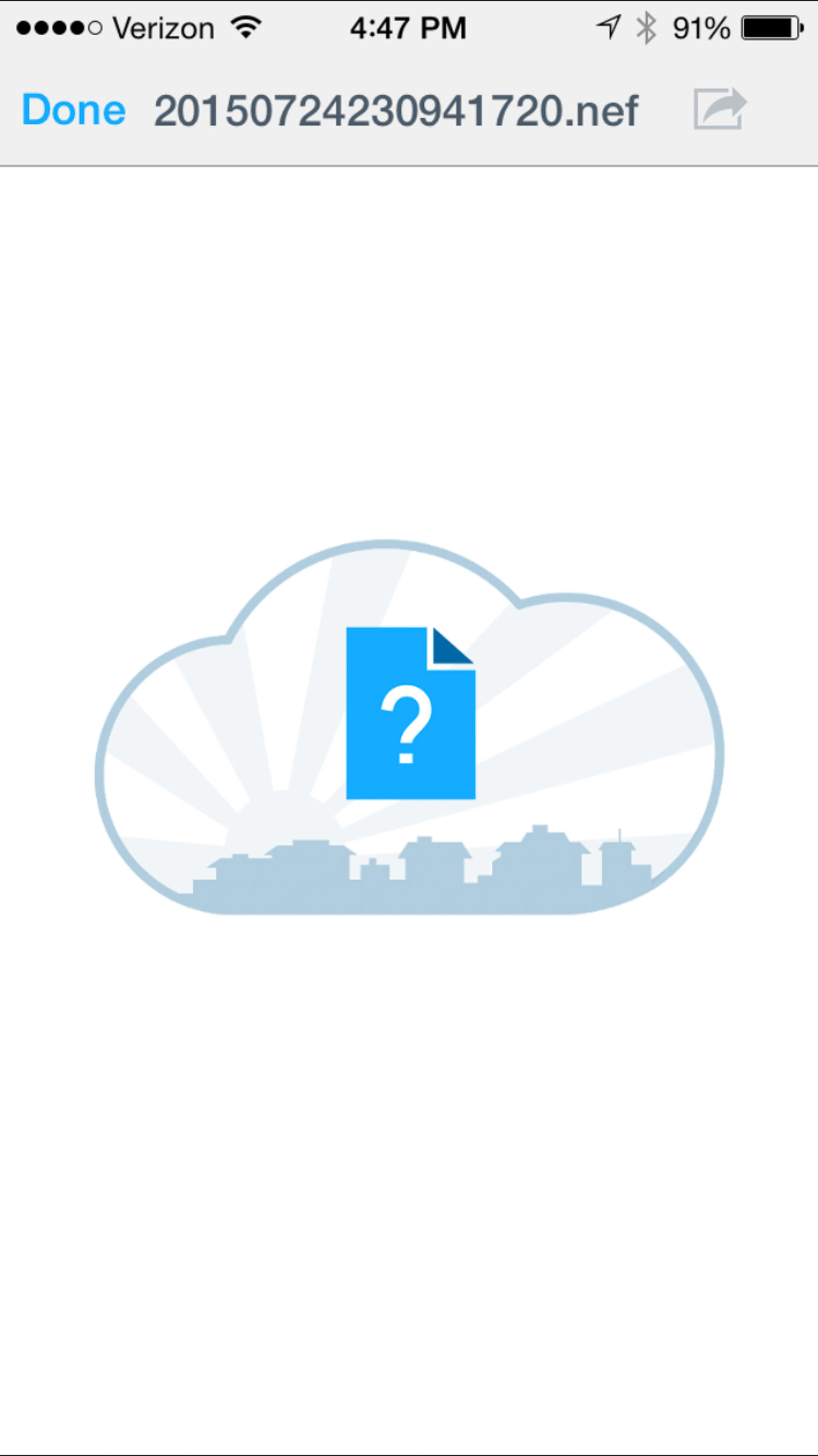 Once you get home and you want to download your photos, you can connect the WD My Passport Wireless to your main computer either directly by wifi, through a home network router, or with a USB cable.

I tested downloading a completely full 64GB SD card using an Extreme Pro 64GB SDXC. I loaded it fully with Nikon RAW files in the .nef format, each of which was between about 30MB and 75MB.

Completely importing to the drive took 1 hr 11 mins, which equates to about 0.83GB per minute or nearly 14MB/S. That’s roughly on a par with the speed of the SD slot on the HyperDrive ColorSpace UDMA2 but significantly slower than the NEXTO DI ND2901.

There’s an internal battery that charges via a standard USB charger. The battery is not user-replaceable.

It comes with an AC USB charger (output of 5V / 2A), although it’s more cumbersome than the ones you probably already have on hand. If you already have something like a multi-port charger or the one from your cell phone–anything that outputs 5V at 2A and that you can put a USB cable in (that includes external USB batteries), you can also use that rather than carrying out the WD one. You can also charge it by connecting it to a computer’s USB port, but in many cases, that will be slower because they usually output lower power than the device can handle.

There’s a single battery indicator light on the front that changes color according to the amount of charge: red for below 15%, yellow for 50%, green for 90%, and blue for 100% charged.

There’s an option under the advanced battery settings where you can enable a high-performance mode that “optimizes” media processing but also reduces battery life. I had that option disabled for better battery life.

The drive has a single USB port that is used for both charging and transferring data. It’s a USB 3.0 port, and it uses a USB 3.0 Micro-B cable.

And, of course, you can connect via password-protected wifi.

In addition to the main device, it comes with a USB 3.0 Micro-B cable and a relatively bulky AC adapter.

It’s doesn’t come with a pouch or case. 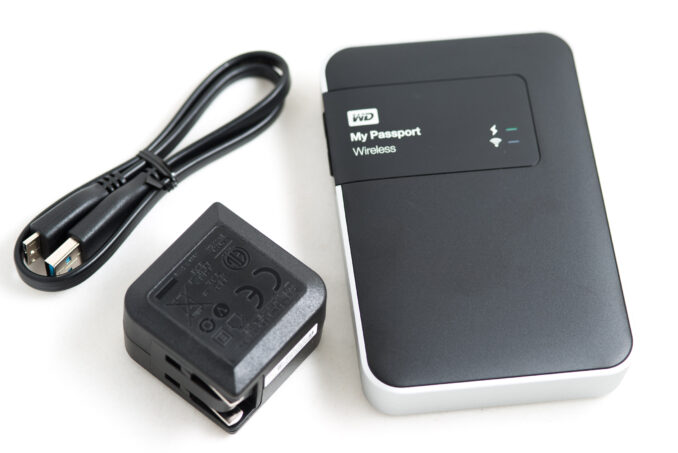 There are also some useful video guides and tutorials pre-loaded on the drive that walk you through various operations.

It’s a bit bigger than some of the other portable hard drives because it has a battery and card reader built-in, but it’s still small and very portable.

It comes with a 2-year limited warranty.

There’s a printed quick-start guide included in the box, but there’s no full manual. There’s a digital version of the manual, along with a bunch of other stuff, pre-installed on the hard drive that you can access through the remote app.

And here’s the online version.

While it’s not specifically marketed to photographers, the WD My Passport Wireless has features that make it attractive to photographers who want to back up their photos while traveling but don’t want to card a laptop with them.

Its basic operation is simple, with speed and battery life performance on a par with other portable memory card backup devices.

The price point is also good, especially in terms of cost-per-gigabyte, making it a very cost-effective option for backing up your photos while traveling.

There are, however, a few limitations to bear in mind if you plan to use it for backing up your photos on the go. The most obvious is that it only supports SD-sized cards (or microSD with an adapter). So if you’re using CompactFlash, you’re out of luck. Another is that the software’s support for RAW image formats is currently nonexistent; you can back up RAW files just as you can just about any other file format, but you can’t preview the photos. The final thing is a safety issue. There’s no onboard way to confirm that a backup operation was successful, and no advanced file verification operations like some other memory card backup devices offer. You can connect via the app and check that the photos are all there, although that’s a bit limited by the lack of RAW file support.

Those limitations for backing up photos aside, there are other features of this device that make it an interesting hybrid for travelers. You can use it just like a traditional external hard drive. You can also use it to stream movies or other media, which can come in handy on long flights or endless train rides. And the support for mobile devices is very good, so you don’t need to use it with a laptop.