The Photo Safe II is an inexpensive and straightforward way to back up memory cards without a computer. Here’s how it stacks up against its competitors.

This is part of a series of reviews I’m doing of portable memory card backup devices that are designed for backing up photos and videos from memory cards without having to use a computer. They combine a battery-powered hard drive with a memory card reader in a small, mobile package. They come in very handy if you’re traveling light without a laptop or simply want the peace of mind of having redundant backups while you’re shooting something like a wedding. You can find my detailed review of the NEXTO DI ND2901 here and of the HyperDrive ColorSpace UDMA2 here.

The Digital Foci Photo Safe II is basically an old model. Under normal circumstances, it probably would have been discontinued long ago, but the reason it hasn’t been discontinued is that it can occupy a price point that’s far below anything else currently on the market. There are much faster, much better memory card backup devices on the market now–even some from Digital Foci–but they’re all significantly more expensive. The primary virtue of this one is that it’s a budget model.

So here’s a review designed to help you decide whether the Photo Safe II fits your needs or whether you’d be better of spending more on one of its better, newer competitors. 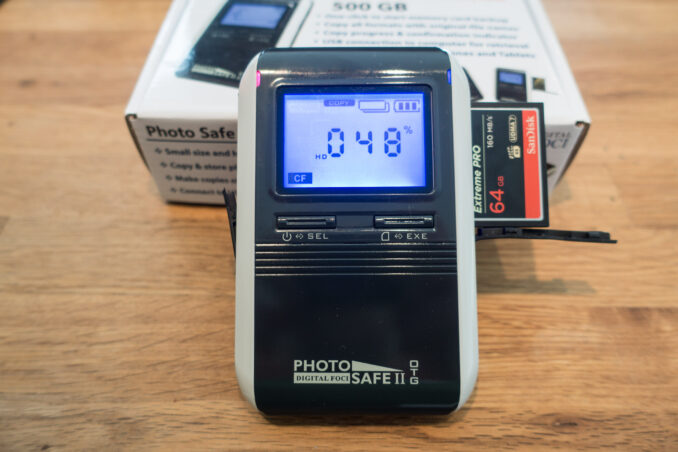 This is a pretty bare-bones device. It copies files from a memory card onto its internal hard drive. It just does a straight copy–there’s no separate verify function to make a bit-by-bit comparison of the data on the memory card with the data that’s been copied to the hard drive.

There’s no option to do an incremental copy. It takes the entire contents of the memory card, whether or not you’ve previously copied part of it.

Aside from informational displays about things like numbers of files copied or storage space remaining, the only other major function on the device is the ability to delete the contents of a memory card (something that is best done in-camera anyway).

The Photo Safe II works with CompactFlash, SD, SDHC, Memory Stick, and MS Pro/Duo. It doesn’t support microSD directly, but you can use an SD adapter (so long as the card is 32GB or under).

But it’s very important to note that because this is basically an older model, it doesn’t support SDXC. That means that SD and microSD cards larger than 32GB will not work (larger CompactFlash cards will, though). The reason is that the device only supports cards formatted with FAT32 and doesn’t support exFAT, which is what SDXC and microSDXC cards are formatted with. This is a hardware limitation and can’t be changed with a firmware upgrade.

There are three memory card slots on the device, each covered by a flexible rubber cover. But you can only use one at a time, and if you have two more three cards inserted at the same time, you can end up with some odd behavior when the device gets confused.

The Photo Safe II, as its name suggests, is marketed as a photo backup. But it will work just as well for video. For that matter, it doesn’t discriminate on filetypes, and most filetypes will work.

It will also work with RAW, JPG, or any other kind of image type simply because it doesn’t do anything with the images. It can’t display or render any types of images, so it makes no difference to the device whether you’re using the latest proprietary RAW format or an old-fashioned JPG or TIF. As far as it’s concerned, a file is a file.

Every new copy operation gets put in its own folder on the device, which is then accessible by connecting the Photo Safe II to a computer and treating it as an external hard drive.

There are two buttons on the front, just below a simple LCD screen. It lights up to a bright blue when the device is powered on. The screen is very basic and gives you a simple monochrome display. It doesn’t display photos–just words and numbers. 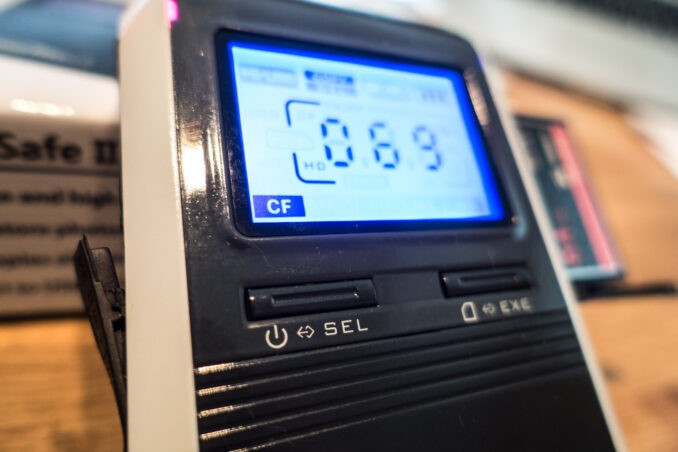 The button on the left doubles as the power and selection button. If you’ve got a memory card in one of the slots and the unit is powered on, you use this button to select between copying mode and deleting mode. You can see the mode toggle at the top of the screen.

The deleting mode deletes from the memory card, not the hard drive. I don’t find this particularly useful–it’s a much better practice to format the card in your camera to reduce the risk of problems. 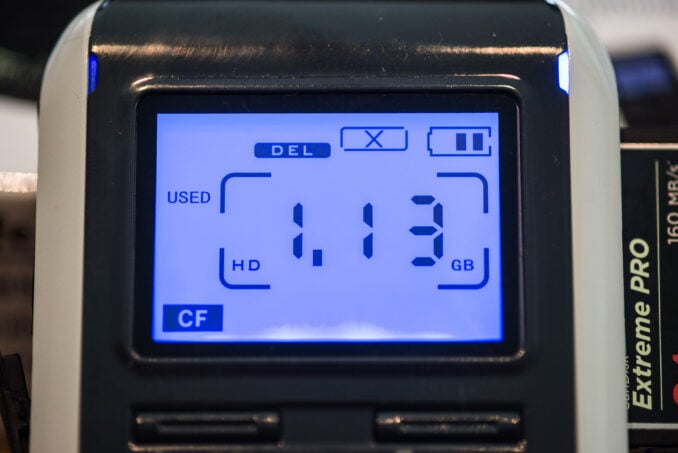 To start the process, you make sure that you have the correct mode selected and then hit the right button (EXE or execute). As the copy process starts, you then get a 3-digit percentage readout of the progress. 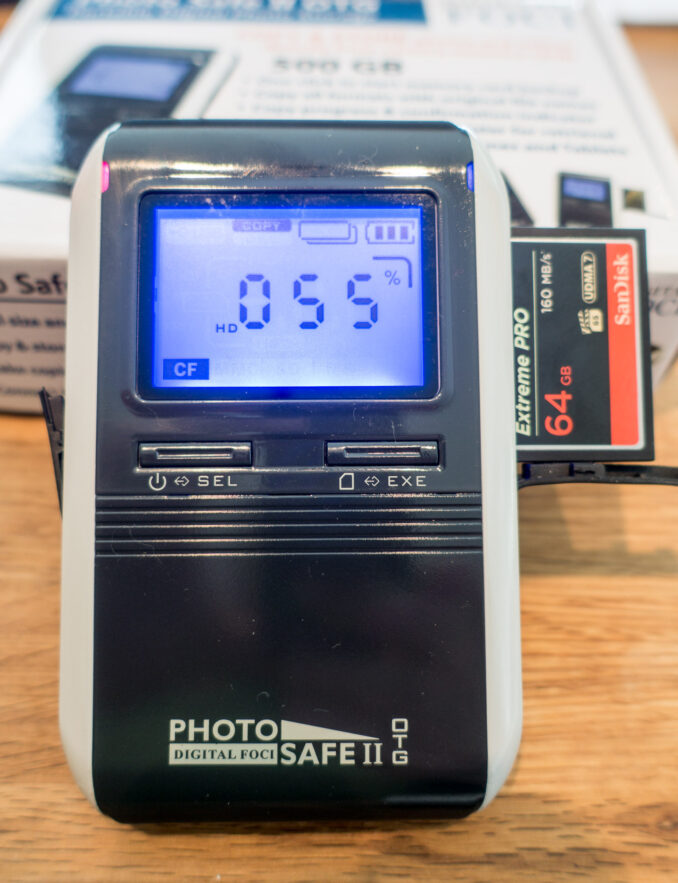 This is where you run into one of the biggest drawbacks of this device–it’s slow. From a memory card, it copies up to 5.0 MB/s. In other words, 1GB takes about 3 1/2 minutes. Compare that to between 2.5GB and 4.5GB per minute on the NEXTO DI ND2901.

Once the copy process completes, it will display 100% on the screen for 2 minutes before the device turns itself off to save power. While it’s displaying 100% on the screen, you can press and hold the EXE button to display the number of files copied and the folder sequence created by the most recent copy. 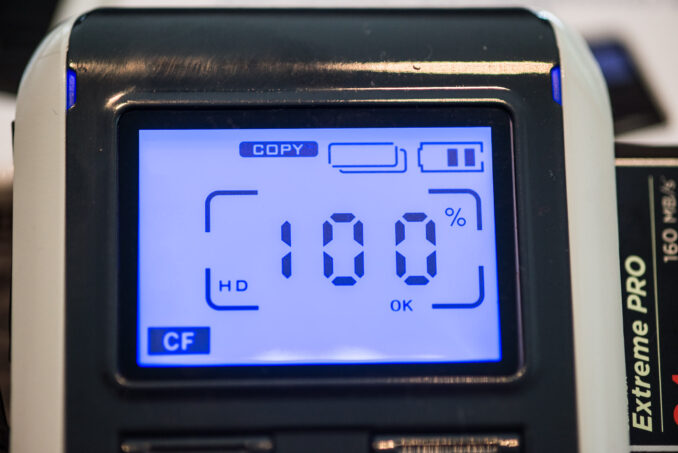 If the copy fails–perhaps you run out of space or the memory card is corrupted–you’ll get an ERROR display on the screen. That disables the automatic power-off, but if you’ve left it to run unattended and the device’s battery then runs out, you won’t see the error mode again when you turn it back on, and there won’t be any indication that the process failed.

To find out how much hard drive space is left, you hold the EXE button for 5 seconds.

Once the copy is complete and you’re satisfied it’s worked, you just pull the memory card out–there’s no eject button.

So what does the OTG part mean? It stands for USB On-The-Go, and it’s a type of communication link technology that allows a USB device like the Photo Safe II to serve as the host when other devices are attached to it. The technology itself isn’t new–the specification was first released in 2001–but what it means in practice today is–in theory at least–you can use the Photo Safe II as a hard drive that’s accessible from your smartphone or tablet. 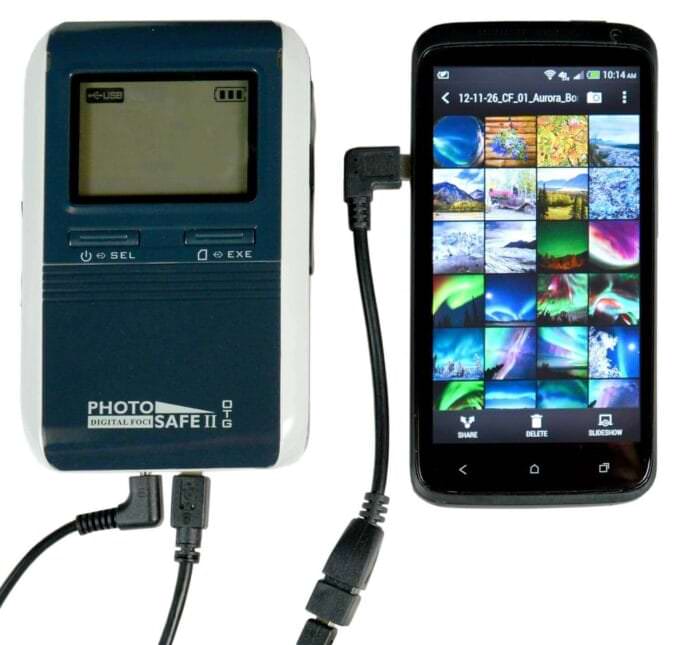 In practice, it’s not that simple. A USB-OTG adapter cable comes in the box, but it’s for a micro-USB connection. That won’t work with an iPhone or iPad–they use their own proprietary connectors. It is possible to buy a lightning to micro-USB adapter which should make it compatible with recent generations of iPads and iPhones that use the lightning connector, but I haven’t tried that and can’t confirm that it does work. There are also USB-OTG adapters for older-model iPads and iPhones, but again, I haven’t tried them. If your phone or tablet uses micro-USB as standard, you should be all set.

If you plug the Photo Safe II into a computer, it will show up as a regular mass storage device–in other words, an external hard drive.

The Photo Safe II does not have built-in wireless capabilities–the only way to access the drive is by connecting cables. It’s conceivably possible to connect something like a RAVPower filehub if you need to turn it functionally into a wifi hard drive.

First, the good. You can charge it either with the supplied AC adapter or use a standard mini USB source like a charger or external battery. Using the mini USB option is slower. In another plus, the lithium-ion battery is also user-replaceable, which is a refreshing change from the usual.

But then there are the negatives. The biggest is that the battery doesn’t last long. In terms of what you can do on a single charge, it’s not even in the same ballpark as the NEXTO or the ColorSpace. In ideal circumstances, the manufacturer claims you can transfer up to 16GB of data from a card to the drive. With today’s high-megapixel cameras, that’s not very much at all. With the NEXTO DI you can get upwards of 200GB per charge at about 4.5 GB per minute.

And when the battery gets fully run down, it’ll take another 4 hours or so to charge it. You can, of course, run the device on AC power, but the transfer rate is still very slow. 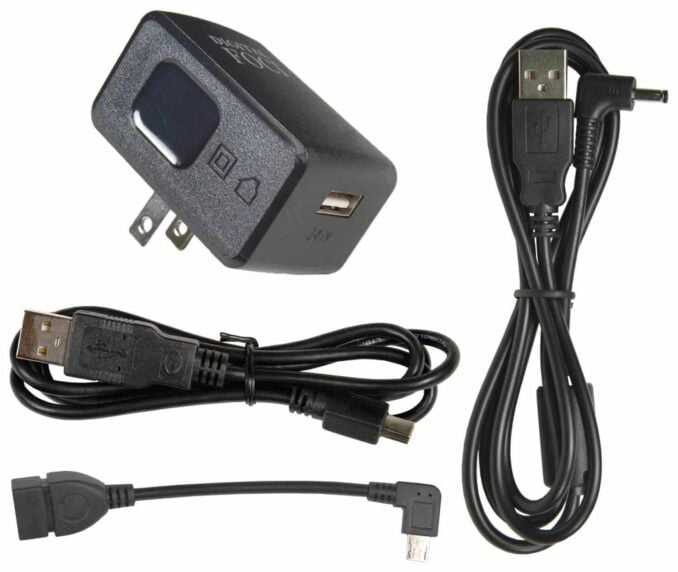 But that’s not to say that there aren’t users to whom the Photo Safe II might appeal. Not everyone needs the more advanced features of the newer models. And where it can trounce its competition is on price. At $149 for a version with a 500GB hard drive, it’s less than a third of the price of the ColorSpace UDMA2 and just over a third of the price of the NEXTO DI ND2901 with the same-sized 500GB drives. It’s about half of the newer Picture Porter Advanced, also from Digital Foci.

In fact, it’s most direct competitor probably comes from a different angle: the WD My Passport Wireless. I’ll be posting a review of that soon, but it’s a portable hard drive with a built-in SD memory card reader and wireless capabilities. It doesn’t have the more advanced copy verification and other features of the more expensive memory card backup units, but with the exception of not having a CompactFlash reader, the WD My Passport Wireless basically does everything the Photo Storage II does.

If you’re looking for an inexpensive and simple portable backup device, don’t plan on backing up more than 16GB at a time, and don’t use SD cards larger than 32GB, the Photo Safe II might work well for you. But if you require anything more–or something faster–you’re much better off spending more and going with a newer device.