How to Disable HEIC on iPhone

Here’s a quick guide to turning off HEIC on the iPhone so that the camera saves regular JPG files instead. 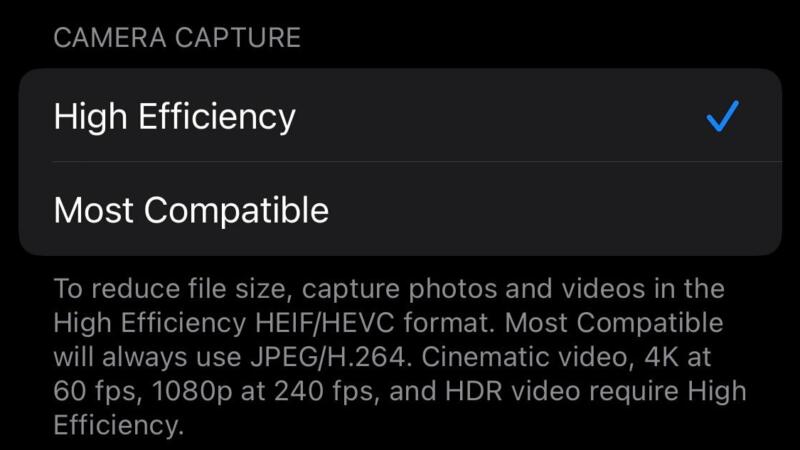 Recent generations of iPhones have been using the HEIF image format (for High Efficiency Image Format) by default for photos saved with its camera. On iPhone, the files have the file extension HEIC.1

HEIC is better than JPG in nearly all respects, and I have more on that below. But in one crucial area, it’s not. And chances are, that’s why you’re here: HEIC files aren’t very widely compatible. It’s frustrating to send a HEIC file to someone and then find out they can’t open it or go to edit one on Lightroom and find it won’t open.2

So here’s a quick guide to turning off HEIC on the iPhone so that it saves regular JPG files instead.

How to Disable HEIC on iPhone Settings

You can find the option to disable HEIC under: 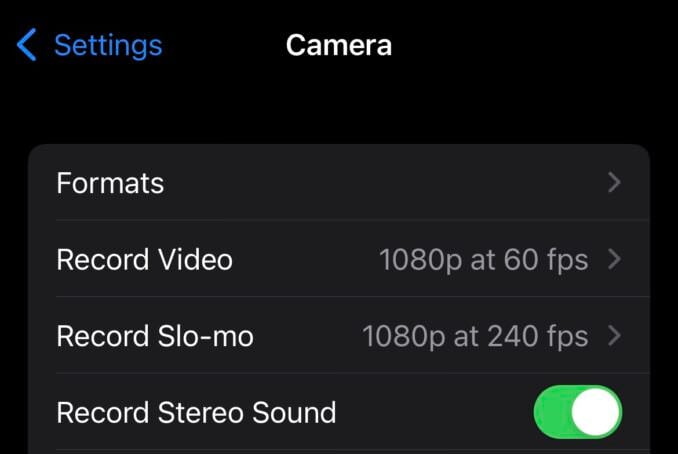 On the next screen, you have a choice between High Efficiency and Most Compatible. 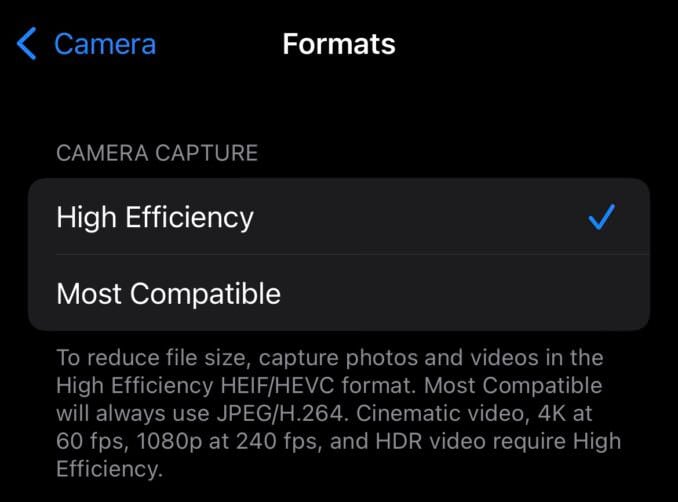 The reason the terms are vaguer than you might expect is that this switch isn’t just about switching between photo formats of HEIC or JPG–it also controls how video files and special features like Live Photo are treated. It wouldn’t make sense for the option to refer to “JPG,” for instance, when it’s also controlling how MOV video files are saved. (For video files, it toggles between HEVC and H.264.)

How to Convert Existing HEIC Files to JPG

Disabling HEIC is all very well for new photos you take going forward, but what about photos you’ve already taken?

Just as with other image formats, it’s entirely possible to convert HEIC files to JPGs.

If you’re using a recent Mac or a newer generation of Windows, you should be able to open and work with HEIC files.

In that case, there are several free apps that can convert HEIC to JPG. One of my favorites is XnConvert, and I’ve put together a guide on how to convert HEIC to JPG with XnConvert that will work with batches of images as well as individual images. It’s a free app (for personal use), and there are versions for Mac and Windows.

If you’re on Mac, you can also create a simple little Automator service (or Quick Action, as they’re now called) that will let you convert from HEIC to JPG with a right-click.

If your computer won’t open HEIC files, you can still use an online service to convert the files. There are quite a few of these kinds of services. I haven’t tried all of them, by any means, but one I’ve found reliable for all sorts of conversion is convert.io. It’s probably best to limit these online services only to photos that wouldn’t make your mother blush (or, at the very least, check their privacy policies first).

It’s worth briefly going over the pros and cons of each format. There’s not really a wrong choice on which to use if you’re just taking regular photos–it’s just whether you want to prioritize compatibility or efficient file sizes. But some of the fancier features, like Live Photos and Portrait mode, make use of features that HEIC files support but that aren’t supported in the JPG format.

Both HEIC and JPG are good options for saving photos on your iPhone.

That said, there are advantages to HEIC that go beyond smaller file sizes. In addition to using more efficient compression, it’s a format that supports a number of other features. But, for now, the catch is in terms of compatibility.

JPG files are the best option for maximum compatibility. JPG is, for all intents and purposes, universally compatible. And it has outlasted a string of new and improved competitors that have come and gone over the years. Somewhat incredibly, JPEG was first released in 1992, which seems incredibly old in internet terms.

But the file sizes are somewhat larger than HEIC counterparts at equivalent image quality levels.

HEIF images (which have the HEIC file extensions on iPhones and iPads) are a better choice for more efficient compression, meaning smaller files, and you can fit more photos on your phone without running out of space. HEIC images are around 50 percent smaller than JPGs of equivalent image quality. Smaller file sizes are also good for sharing over wifi and cell connections. That applies to backing up, emailing, or any other reason for transmitting the files over a wireless signal.3

There are other features that the HEIF / HEIC format support that aren’t available with JPGs.

More usefully, they also support up to 16-bit images. Even though the iPhone’s camera can’t shoot at 16-bit–it’s limited to 10-bit–but being able to use 10-bit images is still an improvement over JPG’s 8-bit limit. It means that

Another advantage is that HEIC images support lossless editing natively. Which means that you can apply some edits to the image without degrading the original image. You might have seen this in action if you’ve used the iPhone’s Portrait mode–when you back those up, an original version without the narrow depth of field is saved alongside the edited version with that classy shallow depth of field.

Another place you can see the advantages of HEIC is if you shoot with the iPhones Live Photos, which are made up of multiple photos and a sound file. But those can be packaged in a single HEIC container. With JPGs, they have to be broken out into multiple individual files and a corresponding video (MOV) file for the sound.

Apple recognizes the compatibility shortcomings of HEIC and has built in a handy feature where HEICs are automatically converted to JPG when you use the phone’s own export tools. So if you add an image as an attachment to an email or message, or upload a photo to Instagram or Facebook, for example, it’s converted to JPG automatically (this applies for both “Just Send” and “Optimize and Send” options when attaching to an email). But this doesn’t cover all situations and may not work in all apps. It does also serve as a useful way to convert small numbers of HEIC files to JPG if you need to–just email them to yourself.

The format is generally referred to as HEIC on iPhones, but in some places in the iPhone’s user interface, you’ll also see it referred to as HEIF. And in some places elsewhere, you might also see mentions of HEVC (for High Efficiency Video Compression). These aren’t strictly interchangeable, but they are all closely related to each other and refer to specific aspects of the technology. HEIF is the general name for the file format container. HEIC is a specific implementation of it. And HEVC is an efficient encoding type that can be used for still images and video.

If you use the Dropbox app to back up your photos and videos, there’s a related setting there that is relevant here. If you go into the Camera Uploads section of the Dropbox app, you can set whether it backs up the original HEIC versions or whether it first converts the files to JPG and saves those.

You can find this option under the settings for Camera Uploads. You’ll see an option for “Save HEIC photos as…”. 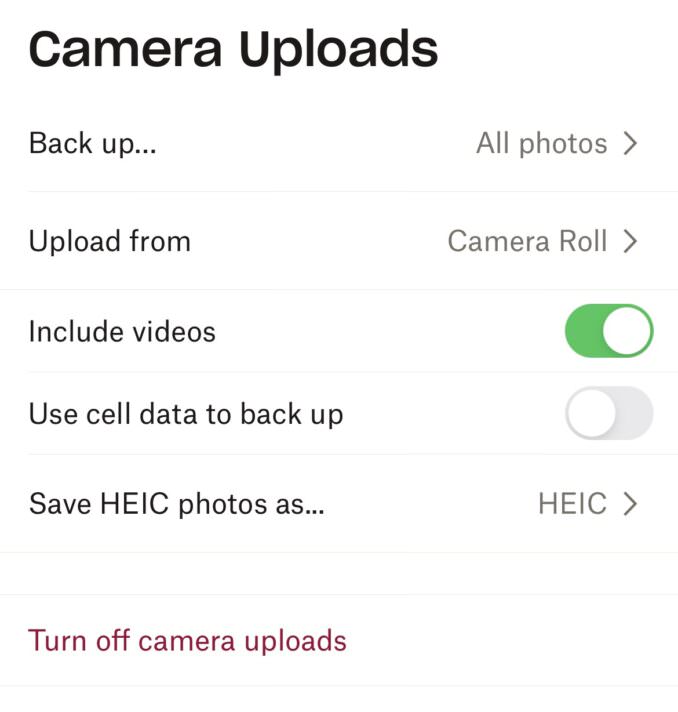 The next screen lets you choose JPG or HEIC. 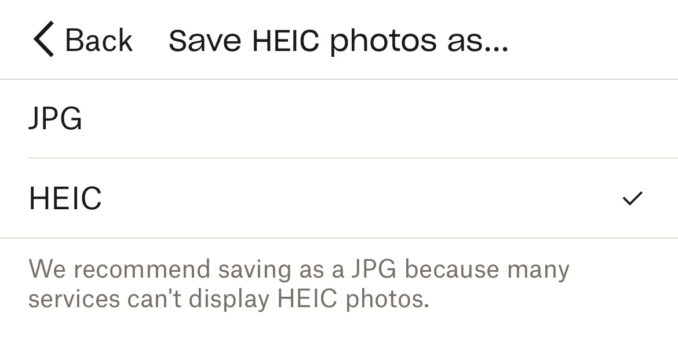 You’ll also see a message that: “We recommend saving as a JPG because many services can’t display HEIC photos.”

Lightroom on Apple devices supports HEIC. But it’s not yet supported in Lightroom on Windows.

But there’s a related format known as AVIF that uses AV1 encoding and is designed for web use and takes aim at the same kinds of uses as Google’s WebP format.

How to Disable HEIC on iPhone