How to Speed Up Importing Photos Into Lightroom

Importing images into Lightroom can sometimes seem to take forever. Here are some ways to streamline the process and save time. 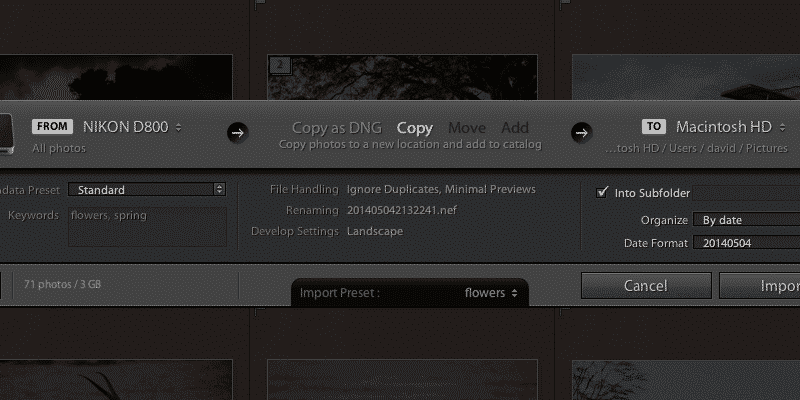 Importing images into Lightroom can sometimes seem to take forever. It’s notoriously one of the slowest parts of the process. But as tedious as it is, it’s an essential first step to getting your photos off your memory card, onto your hard drive, and into Lightroom.

It seems slow because it’s actually doing several things at the same time. It’s not just copying the files from your memory card onto your hard disk. It’s doing that, but it’s reading the image thumbnails from the memory card, applying any develop and metadata presets, creating an XMP sidecar for each image, creating a new database record for each image, and then building previews so that when you go to edit or sort the photo in the Library and Develop modules, there’s a higher resolution version for your work with.

All of that takes time. If you’re only importing a few dozen images, that’s not a big deal. But if you’re working with hundreds or thousands of photos to import and you’re on a deadline, that can be an issue.

So here are some ways to streamline the process of importing images into Lightroom.

Only Build the Previews You Need

The building previews part of the process comes at the end, and it takes some time. Your images are available to you while that’s going on in the background. In theory, that background processing shouldn’t slow down your workflow. In practice, it often does. And there are instances where you simply don’t need a high-resolution preview for every image–like when importing thousands of images from a timelapse shoot, for instance.

At the top right of the import screen, you have a drop-down menu for Build Previews. Choosing Minimal from that will prevent Lightroom from automatically building previews as part of the import process. You can have Lightroom build them later (Library > Previews) or you can build previews for an individual image on demand by opening them.

Use Develop and Metadata Presets

This is one of the best features of Lightroom’s import function. In the right panel, you can set Metadata Presets and Develop Presets. These alone will save time later.

But you can also take this one step further. Down the bottom, you can set an overall Import Preset. Get everything how you want it and then click on the Import Preset drop-down menu to create a new Import Preset.

That will not only apply the develop and metadata settings but also the file naming and file location settings you’ve selected.

You can create multiple Import Presets.

This doesn’t technically speed up the actual import process, as such, but it can save a lot of time afterward.

Use the Minimized Importer

When you open the importer it reads a thumbnail image from the memory card for every photo.

That’s not much of a problem with only a few images. And it’s great if you plan to pick and choose right there which images to import and which not to. But in most cases I just want to import all the images would rather make the selection using something better than just a thumbnail.

But if you’re working with thousands of images, simply reading the thumbnails from the memory card can take time.

If you know you just want to import everything, you can skip the thumbnails completely. At the bottom left, there’s a triangle button.

Push that and the import screen will shrink down to a simplified version, like this:

You don’t have the full set of panels, of course, but if you’ve already applied them and saved them as an Import Preset, that’s not a problem.

Other Ways to Speed Up Importing Images

There are other ways to speed up the task of importing photos from your memory card to your hard drive that aren’t specific to Lightroom.

How Do I Do That In Lightroom?: The Quickest Ways to Do the Things You Want...
Check Price on Amazon

1 thought on “How to Speed Up Importing Photos Into Lightroom”

How to Speed Up Importing Photos Into Lightroom