How to Turn on Self-Timer on Nikon D3400

Here's how to turn on and use the Nikon D3400's self-timer and the options you can set with it.

Cameras have had self-timers almost from since they started being put in the hands of everyday consumers. They’re the original selfie mode. But they can also be put to use in other ways.

Here’s how to use the Nikon D3400’s built-in self-timer and the options you can set with it. While there’s nothing complicated about the process, there are some settings you can change to control its behavior.

How to Turn on Nikon D3400 Self-Timer

To start the D3400’s self-timer, you press the button on the back that has the countdown clock icon next to it. It’s the button at the left in the photo at the top of this page.

That will bring up the Release Mode screen. By default, the single frame option is enabled. 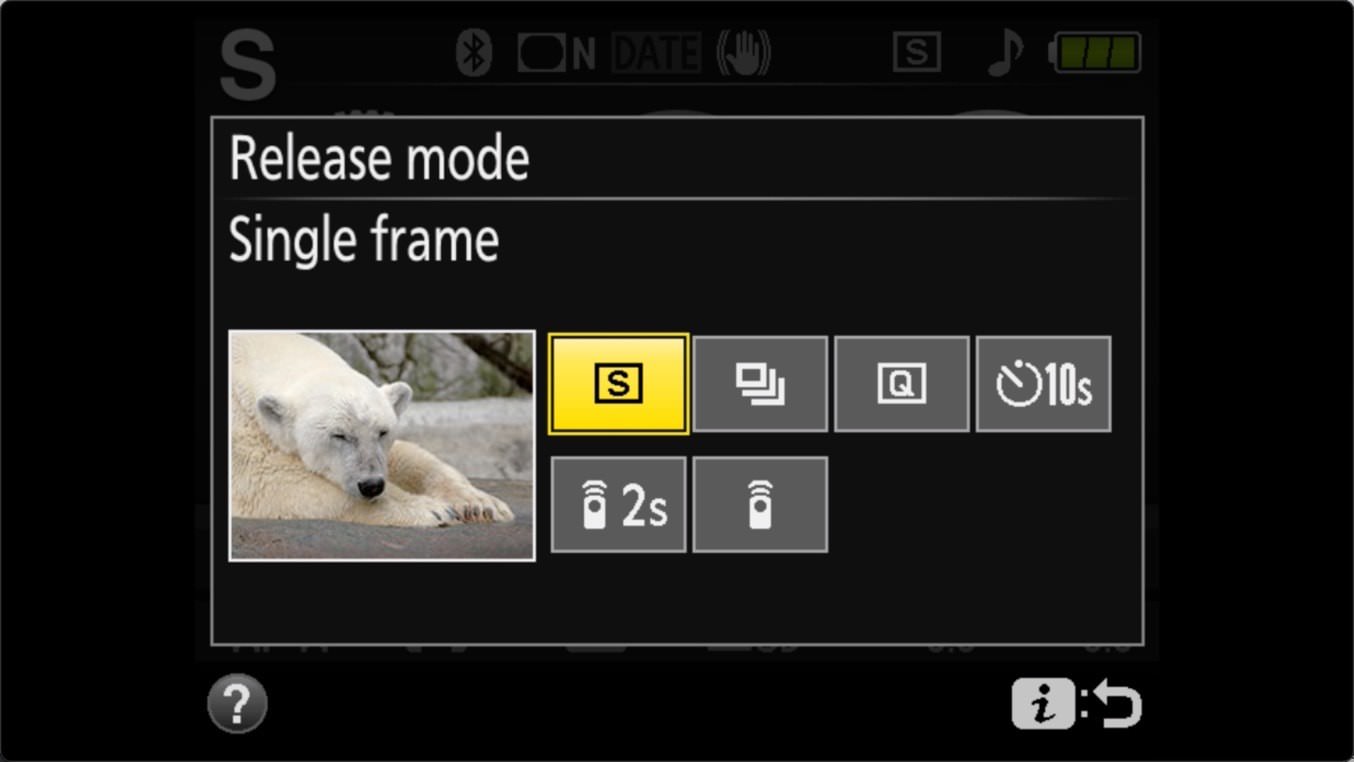 Select the right-hand option for self-timer. 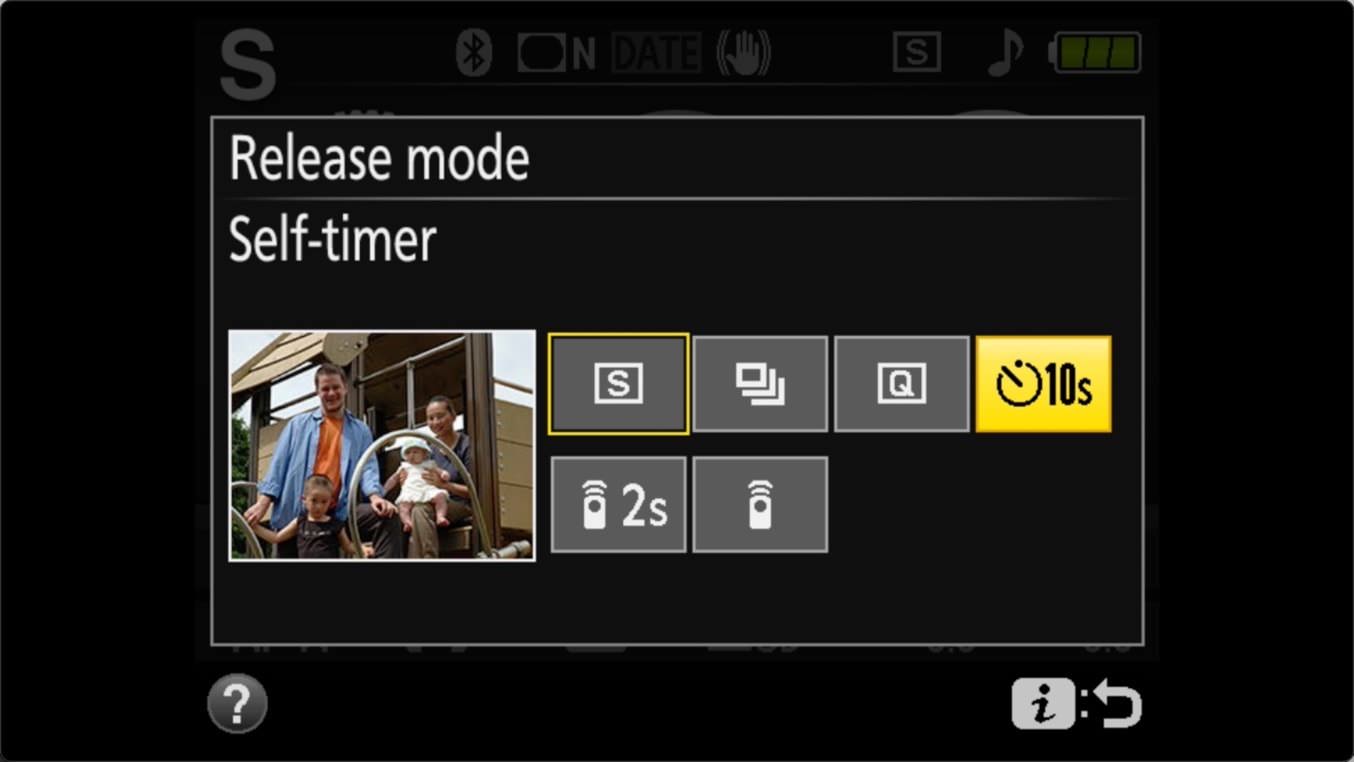 With the D3400 engaged, you’ll see an icon on the main status window on the back screen. Helpfully, there’s also a message at the bottom of the screen to remind you that it’s engaged. 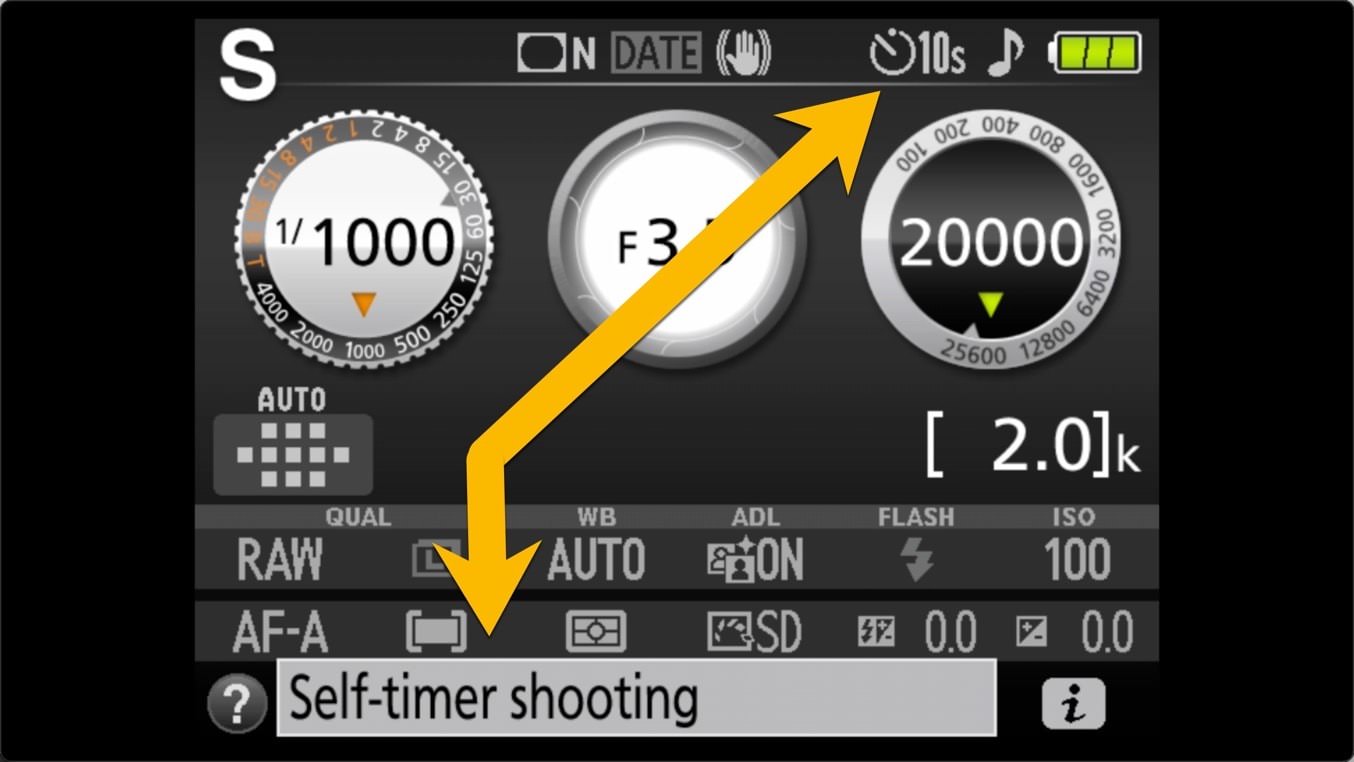 With the self-timer engaged, when you press the shutter button, it won’t immediately take a photo (of course). But you’ll know that it’s working by the flashing light on the front of the camera next to the grip. It flashes quickly at first, and then right before it takes the photo, it’ll stay solid for a couple of seconds. So if you and your group are in front of the camera, you don’t have to be guessing when to smile and not blink.

And in a useful feature, the self-timer is engaged once at a time. What I mean by that is that it will disengage automatically once the sequence of self-timer photos has been taken. If you want to use it again, you’ll need to engage it again. This behavior is useful, because, on other cameras, it’s very easy to accidentally leave it engaged and then find that shutter isn’t responding when you press it and end up missing the shot (it’s happened to me more than a few times).

There are some settings you can use to have some control over how the D3400’s self-timer behaves.

You find the Settings for the self-timer under: 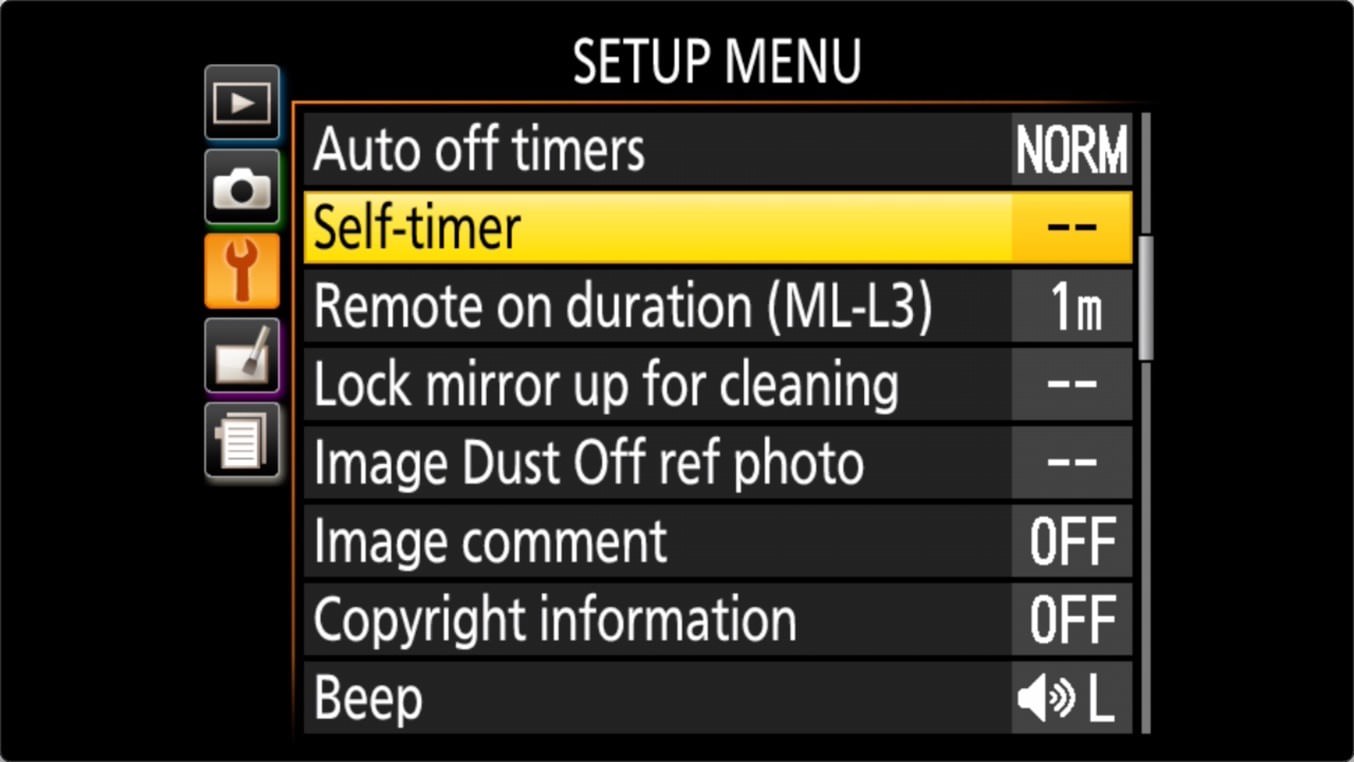 There are two settings you can change. 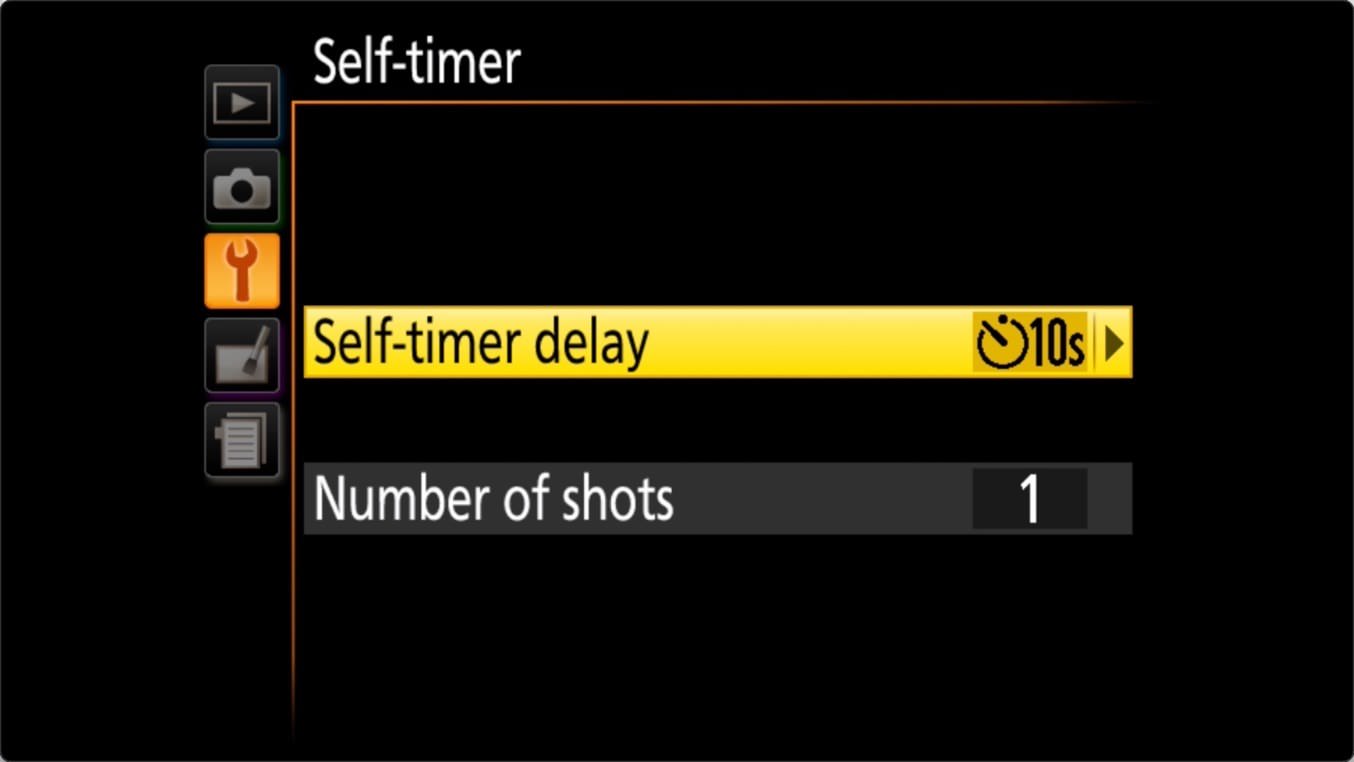 This is the time between pressing the shutter and it taking the first shot. 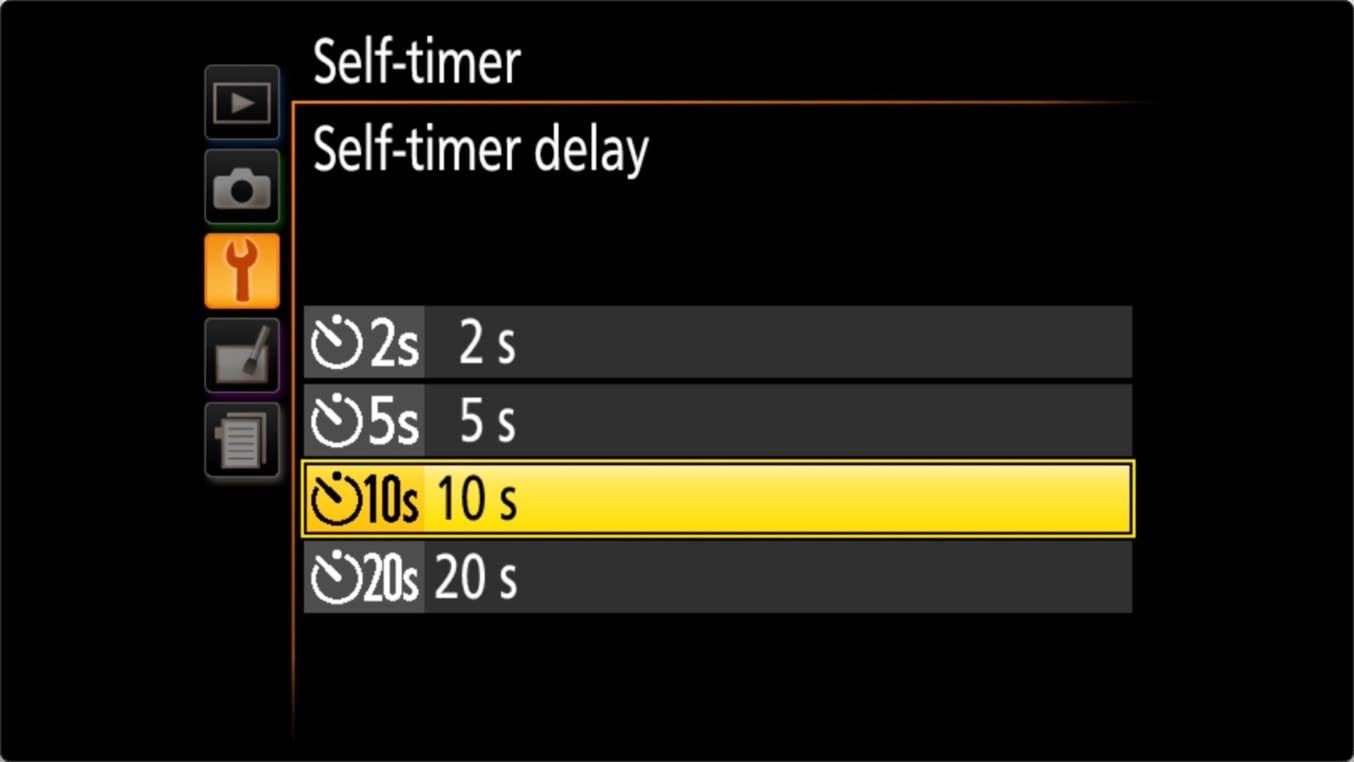 By default, the D3400’s self-timer will take a single shot. But you can change that and select up to 9 shots (the default setting is 1). 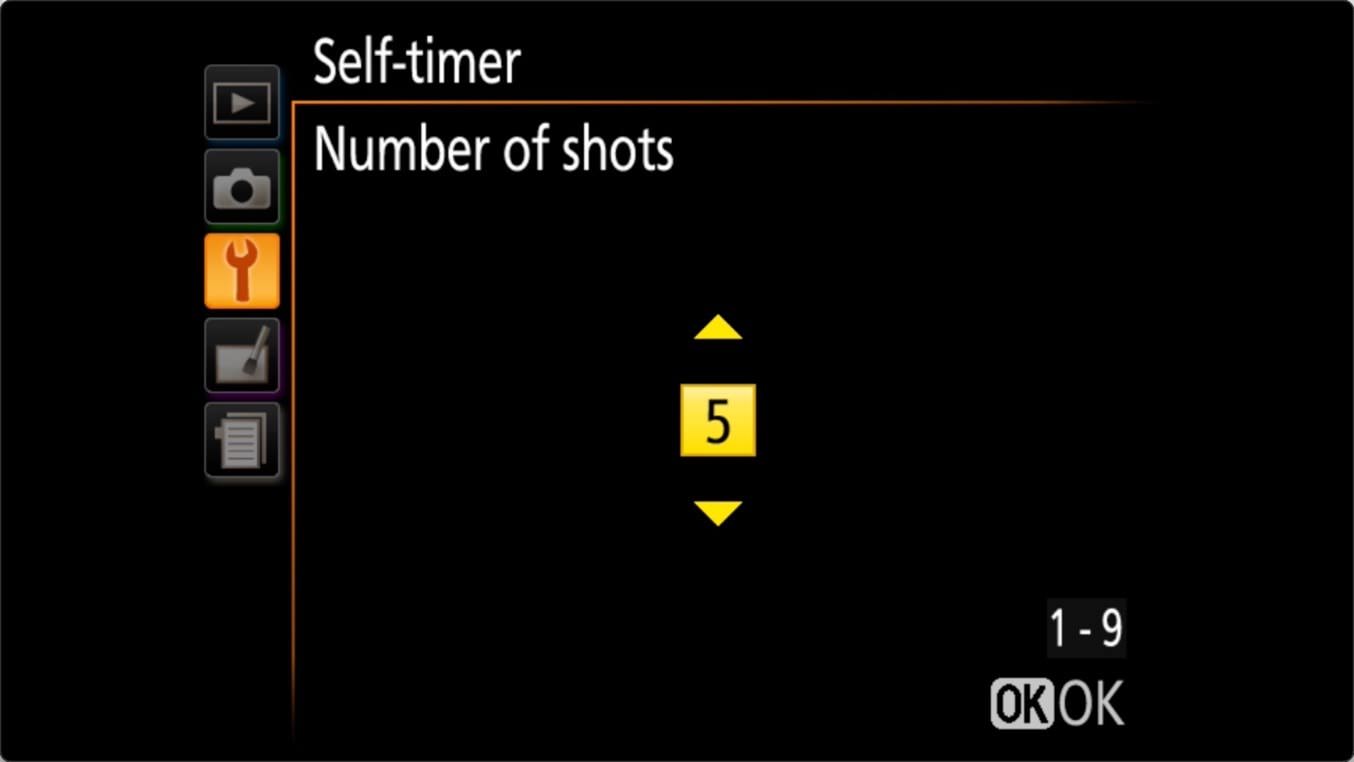 There’s about a 4-second delay between each of the shots after the first one. The Self-timer delay setting doesn’t affect this–that’s just between pressing the shutter and the first shot being taken.

Being able to create a sequence can be very handy as a safety precaution. If you’re taking a group shot, for example, it will give you more photos to choose from if someone has their eyes closed or looking the wrong way.

Uses for the Nikon D3400 Self-Timer

The most obvious use for the self-timer is the traditional one: for selfies or group photos where the photographer is in the photo. You know the ones–you line up the group, compose and focus the shot, press the shutter, and then race around to join the group.

A less common use for the self-timer, but still very useful, is when taking long-exposure shots on a tripod. It’s one method for having the camera activate the shutter without risking more movement by touching the camera with your hand to press the shutter (other good methods are using a remote or using the SnapBridge app as a remote). Because whether you’re taking night-time photos of cityscapes or star trails in astrophotography, the less the camera shakes, the better. And using your finger on the shutter inevitably shakes the camera. Having the camera activate the shutter itself still isn’t perfect–there’s what’s called mirror slap, as the DSLR mirror rises and falls back into place–but it’s much better than doing it by hand. Some more advanced cameras have a mirror lock-up feature that eliminates that, but the D3400 doesn’t have that. (The D3400 does have a Lock Mirror Up For Cleaning feature, but that’s different from the kind of mirror lock-up that’s designed for minimizing mirror vibrations in long-exposure photography.)

If you're after some recommendations on lenses to get for the D3400 to step beyond the kit lens that comes with the camera (usually a basic 18-55mm zoom lens), here are some ideas that are sensibly priced and greatly expand your options: