Youtube is one of the few big players that support 360° video so far. Here’s how to upload and share the video footage you’ve shot with a Ricoh Theta S on the service. 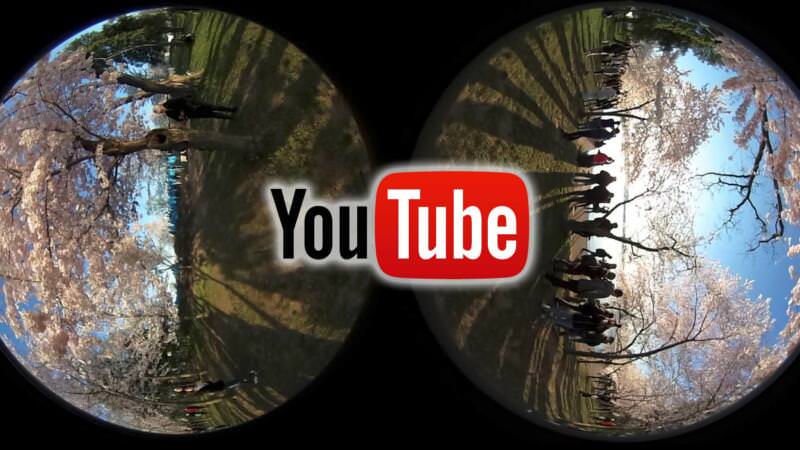 360° video is starting to make some real buzz lately. Discovery Channel and BBC have started some experimental filming with it, and tech giants like Facebook and Samsung are investing heavily in headset viewers. And while Ricoh has pioneered the consumer market for 360° cameras, others, like Nikon and GoPro are now getting in on the action. The immersive experience that 360° video offers looks set to be much more than a gimmick.

For now, though, there are still only limited options for sharing 360° footage shot with these cameras, including the Ricoh Theta S, online. Ricoh has its own service, called theta360.com which works well enough, but let’s face it–it’s not a destination that a lot of people visit to view videos.

The two much bigger players that support 360° video are Facebook and Youtube (Vimeo doesn’t support 360° video yet, but hopefully they’ll come around soon). I’ve already posted a guide to sharing 360° videos on Facebook; here’s a guide for posting Ricoh Theta S video to Youtube.

Uploading a Video Straight out of the Camera

The Ricoh Theta S video generates video files with the common mp4 container. But just because it has that file extension doesn’t mean it’s going to work as-is.

If you take the video straight out of the camera and try to upload it to Youtube, it’s not going to work properly. The video will upload and be available, but when you go to view it you’ll see a stereoscopic image–an odd-looking video of side-by-side circles, each showing the hemisphere captured by one of the two Ricoh Theta S lenses. It’ll look something like this:

To make it work properly there’s a step you have to do before uploading it: you need to convert the image from stereoscopic view to an equirectangular one. That will combine the two hemispheres into a wide view with dimensions where the width is exactly double the height (otherwise known as a 2:1 aspect ratio). And the tops and bottoms of the frames will look strange and stretched. But when used in a specialized 360° player those stretched parts of the frame will fill out when you look up or down.

If you’re shooting with a Ricoh Theta S, the easiest way to convert the stereoscopic video to an equirectangular view is to use Ricoh’s own, free app. It’s called Ricoh Theta, appropriately enough, and it’s available from the theta360.com website (in the Basic App section).

Once you install and run that, you get a drop panel that you simply drag and drop your stereoscopic video onto. 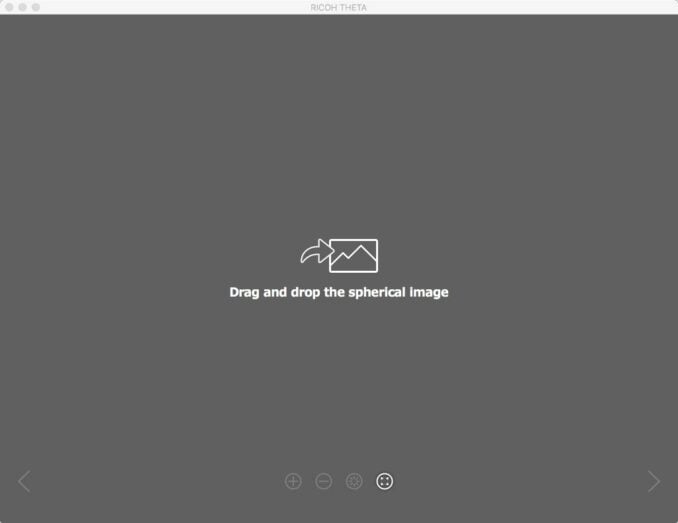 You’ll then get a popup asking you for filenames and location where you want to save the converted file. This is for saving a converted copy alongside the original. 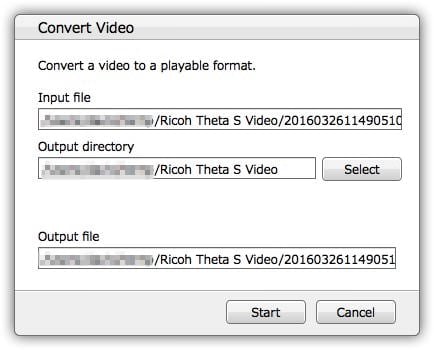 Once you have the converted equirectangular version, you start the process just like you would any other video file. Once you’re logged into Youtube you can just use the “Upload” button at top or go through the Video Manager.

Just like you would with any other video, you can set the title, caption, tags, privacy, and options under Advanced Settings. Then hit Done. 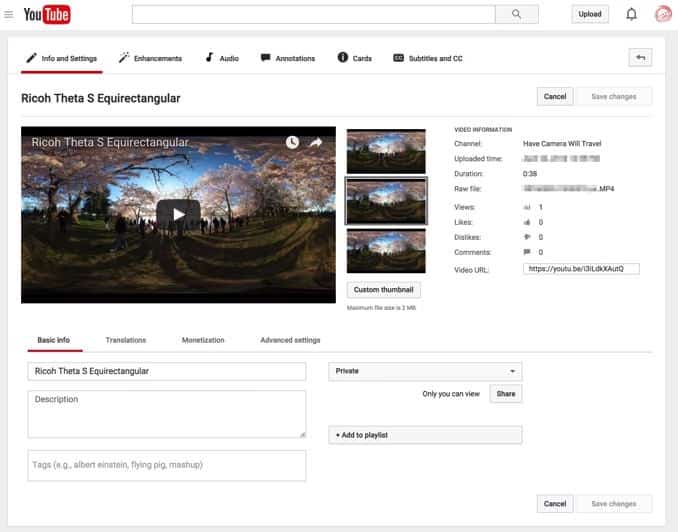 It should automatically detect it as a 360° spherical video and play it as such. If it doesn’t, see the section below. But first, it’s worth waiting a bit: Youtube says it can take up to an hour or so for the 360° version to be available.

And there is one thing to watch: don’t use Youtube’s own Enhancements or Video Editor tabs. Those are not compatible with 360° video and will break that functionality.

Once the video has been successfully uploaded to Youtube, there are multiple ways to interact with it. The current versions of most of the major desktop web browsers support 360° players. So do the Youtube apps on both Android and iOS, where users can get a really cool effect by simply moving the phone or tablet around to change the view. Another option is to use a VR headset, like Google’s own Cardboard or one of the new dedicated VR headsets that are coming onto the market.

Youtube’s 360° videos embed in other websites exactly the same way that any other Youtube video does. Wordpress users can typically use various shortcodes.

You can also use the usual Embed code that is generated with the “Share” button under videos that are available for sharing. It generates an iframe code that you copy and paste into your website’s page. 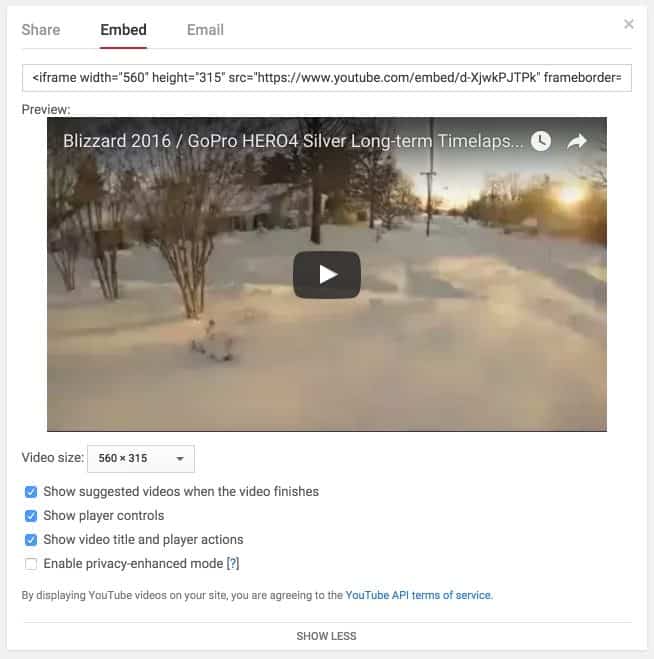 If Youtube isn’t detecting your video as a 360° video, there a few possible reasons. Most of them are related to editing either the aspect ratio of the video or having messed with the metadata in some way. It might also happen if you’ve used an older version of the Ricoh Theta app, so it’s worth checking that you’re using the latest version.

The simplest to fix is if the metadata is missing. Newer versions of the Ricoh Theta app add it automatically when you save the converted version. Youtube uses that metadata to understand that it’s a 360° video and not just a regular “flat” video.

Google put out its own free app that can correct missing metadata. It’s variously called the Spherical Metadata Injector or the 360 Video Metadata app. You can find it here. 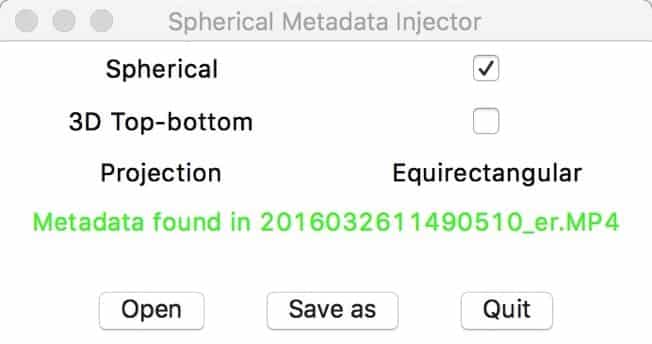 There’s not much to it. Just open the video file using the Open button. Then make sure the “Spherical” option is checked. Then save the file. Now, when you upload this newly saved version to Youtube it should automatically detect that it’s a 360° video.

If you really want to, you can also use a Python script to inject the spherical metadata. You can find more information about that here.

Youtube takes a very workmanlike approach to 360° videos. It works, and it works well. It doesn’t have all of the polish of Facebook’s implementation of 360° video technology, but it’s highly available, highly reliable, and, for most users, intuitive to use. And if you’re shooting with a Ricoh Theta S, it’s among the best options for sharing your 360° videos with others.