The Wolverine F2D Titan Film to Digital Converter is a dedicated slide and film scanner. It’s small, simple to use, and relatively inexpensive. Here’s how it works in practice. 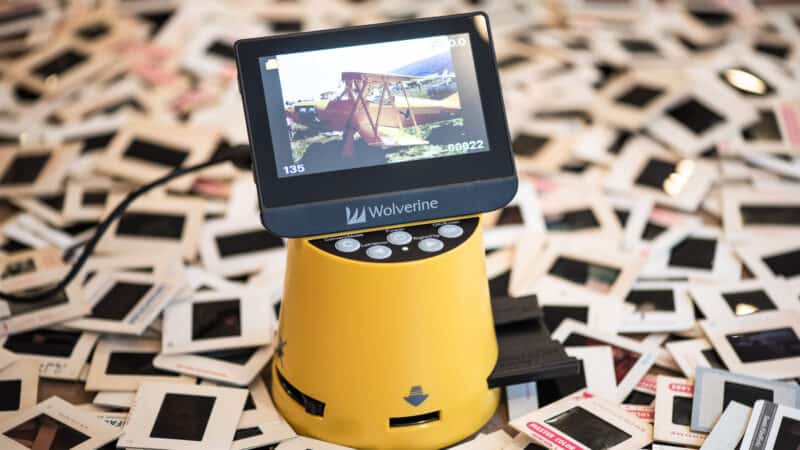 A box of slides or old film negatives sitting in a box in the attic isn’t much good to anyone.

Sure, you might luck out and find an older Kodak Carousel projector still in working condition and convince friends and family to endure a slideshow evening, but a much more practical option these days is to scan those slides and films to digital. You can then share them with family and friends on social media, or make photo books as gifts and keepsakes, or make large prints to hang on the wall, or use them for coffee mugs or family tree tracing, or any number of other uses.

There are several ways you can take those old slides and films and digitize them into digital images. The simplest is to pack them up into a box and send them to a service that will take care of it all for you. But those can get expensive very quickly and can get prohibitively expensive if you have many slides to do.

Your local neighborhood copy shop might also offer this service; quality and prices vary widely. Some flat-bed scanners have the ability to scan slides and film, so if you already have one of those, it can be worth looking into whether there are film and slide holder accessories available for your model and whether the scanner is able to scan transparencies (film and slides are transparent in the sense that light shines through them, as compared to prints where the light is reflected off them).

But what I’m focusing on here are dedicated film and slide scanners. I’ve used dedicated film and slide scanners for many years in my own work–I started shooting a long time ago and have accumulated quite a large analog archive of film and slides. But recently, I’ve been putting some of the most popular current models to the test as part of a review series. And I’ve found that there are some surprisingly cost-effective options out there that are easy to use that still give very good results.

The Wolverine F2D Titan Film to Digital Converter falls into that category. It’s a compact, single-purpose device that takes old slides and negatives of various formats and converts them to digital images with the push of a button. It’s at the entry-level end of the market, which is good for price and ease of use, although more demanding users might prefer something with more advanced features (which also come with a higher price).

I’ve previously reviewed the entry-level Kodak Mini Digital Film & Slide Scanner. The Wolverine F2D Titan Film to Digital Converter shares quite a few similarities. 1 They’re both small, standalone, manual-feed scanners that can take old slides and films and convert them to digital image files. And some of the components are so similar that it wouldn’t shock me to learn that they’re made in the same factory.

But there are still some notable differences. The F2D Titan is a bit bigger than the Kodak Mini (no surprises there), and it has a much bigger screen, which makes it easier to see in detail what you’re scanning. It also has some extra features. 2 So it’s generally a step up. But it’s still at the entry-level end of the market and doesn’t have the advanced features that some of the fancier and more expensive models have.

First, a rundown of some of the key features.

Entirely manual. There is no auto-feeder on this scanner to advance to the next frame. So you load each slide or film frame, one by one.

Large Screen. It has a 4.2″ color viewer on top. While that seems pretty straightforward, it’s notably larger and clearer than a competing scanner I’ve reviewed before, the Kodak Mini Film Scanner. And in use, while you don’t strictly need that larger screen, it does add convenience in giving you a better view of what you’re scanning. It helps to see whether the scan is sharp, whether there’s a lot of dust that can be wiped off, and whether the scan is properly aligned. And if you’re using the in-scanner color and brightness correction, it’s useful for that too.

Output resolution. The files that come out of the scanner are 20-megapixel JPGs. The files measure 5472 x 3648 pixels.

HDMI Output. This connection allows you to connect the scanner directly to a TV or external display. But it doesn’t come with an HDMI cable–you’ll need to arrange that separately.

It doesn’t have an auto-feeder, so you’ll need to load each individual frame manually. And it doesn’t have dust and scratches correction; that’s something you’ll have to address in post-processing.

The gist of how the Wolverine F2D Titan works is that you load the slide or film strip into a holder and then insert that holder into the scanner. The image shows up as a live preview on the screen. And you have some basic corrections you can make, such as brightness, before pressing scan. The image file is saved either to the internal memory of the scanner or to an SD memory card (and optional extra). You can then copy that file to your computer or mobile device and do with it as you will.

The F2D is a standalone scanner, which means you don’t have to connect it to your computer to make it work (although you can download the scanned images after the fact to your computer). And there’s no new software to install and learn.

There are some controls that you can manage using the scanner’s buttons and menu system:

The scanner is compatible with some of the most common film types:

It’s important to note that each individual frame has to be manually fed into the scanner–there’s no automatic advance to the next image. That also applies to the Super 8 compatibility: it’s for individual still frames, not for converting a movie film to digital video.

These were all shot without any exposure compensation or other corrections. They’re straight out of the scanner. I’ve been using mostly the same set of slides and negatives in testing this and other scanners.

For these, I’ve used the default auto settings. And I’ve found that it does often tend to overcook (or oversaturate) the colors and that sometimes the white balance correction can go a little haywire. The results are more vibrant, which is often a good thing, but they can also tip over into “too-vibrant” territory. In a high-end scanner, I’d find that unacceptable, but factoring in the typical use of an entry-level scanner like this, I find it more forgivable. In large part, that’s because old slides and old films often bring their own weird color shifts just from the age of the emulsions and how they degrade over time. So you’re often starting with flawed originals. That said, I’d prefer if the auto settings were dialed back a little, especially on contrast and saturation (I didn’t run into these issues with black and white negatives). Of course, it’s also possible to turn off the automatic exposure and treat each one individually. But that’s a much less convenient option.

I got the best results straight out of the scanner when using slides. There’s always room for post-processing, of course, but the automatic settings did a decent job, although there is sometimes a tendency to overdue the vibrance and contrast.

I found that the automatic exposure settings didn’t work all that well on black and white negatives. They need some fixing of the contrast and brightness in an image editing app.

The F2D Titan is simple, compact, and relatively inexpensive. I’ve found it to work well. Like the Kodak Mini Film Scanner, it’s on the simple and straightforward end of the market. And that simplicity has its virtues, especially if you’re just looking to digitize a relatively small collection of slides or negative strips.

But once the numbers of scans start climbing into the thousands, the one-by-one manual loading will get tedious. That’s where a higher-end auto-feed model will come into its own. And the higher models also offer more control over the image quality in areas such as resolution, file type, batch scanning, color correction, and dust & scratch removal.

The scan quality is good, although the auto settings often result in oversaturated images. That’s very much a matter of preference, though, and straightforward to fix afterward.

But for simple, relatively small scanning jobs, the Wolverine F2D Titan is an excellent option and well worth a look.