Have some old family photos you’d like to scan? If they’re slides or negatives, a basic film scanner can be a great option, whether you want to share the old photos on social media or preserve the photos in a printed photobook. I’ve been trying out one of the simplest, cheapest, and smallest options, the Kodak Mini Digital Film Scanner. Here’s how it works. 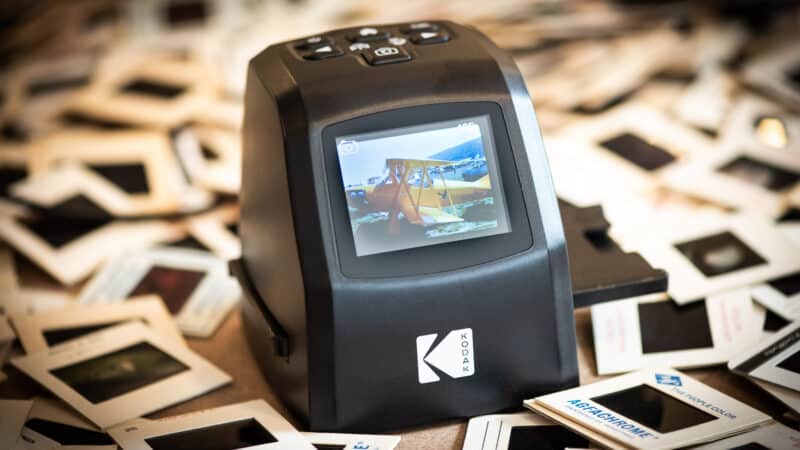 If you were to play a word association game with the word “film,” the Kodak brand is going to come up pretty quickly. They’ve been an iconic company in consumer photography from its earliest days. And even today, when you travel to the farthest reaches of the world, there’s a decent chance you’ll come across one of those bright yellow Kodak Film Sold Here signs before too long.

But despite some early innovations in the days when digital imaging was taking off, as a company, Kodak didn’t make the transition to digital well. These days, they seem to be around mainly on the strength of their patents and licensing opportunities.

But one area where they still have consumer products is for digitizing film. They have a range of consumer scanners for taking all those old slides and strips of negatives sitting in attics and cupboards the world over and turning them into digital images more easily shared in this day of digital file storage and social media sharing.

And they have several in their lineup. The one I’m focusing on here is their smallest, cheapest, and simplest. It’s the KODAK Mini Digital Film & Slide Scanner. I’ve been trying it out with some old slides and films to see how it performs.

As you’d guess from its name, this is a very compact scanner. (They have others that are larger and have more features.) On the front is a small color screen for previews. On top are the control buttons. And the film passes through a slot on one side out of a slot on the other side.

Standalone Scanner. One thing that’s important about using this scanner is that it’s self-contained. That is, you don’t connect it to a computer and run the scanner from the computer. You can do all the scanning with just the scanner; everything is controlled by the buttons on top. The files are then saved into the scanner’s internal memory (128MB built-in) or to an SD card. You can then transfer the image files to your computer via USB connection or by downloading them from the SD card using a card reader, just as you would from a memory card from a camera. The advantage of this self-contained method is convenience. The disadvantage is that it doesn’t give you much control or the advanced processing options available in more sophisticated (and expensive) scanners.

Power. It’s powered over a USB cable. It comes with a wall AC adapter with a few international plugs, but you can also use a different AC wall adapter or even another USB power source. I’ve been able to run it off a USB power hub and a USB mobile battery, although not all batteries and USB power sources have the same power output. But the upshot is that you could technically run this on the go without AC power (although I’m struggling to think of too many scenarios you’d want to…) It comes with a mini-USB cable, or any standard mini-USB cable will do so long as it will convey power and not just data.

Data Storage. As a self-contained scanner that doesn’t interface directly with a computer, the data is saved at the device itself. There is 128MB of internal storage (or about 114MB of usable storage), but that’s not much and will quickly fill up when each of the images comes in around 2-3MB (when using the higher-resolution setting). The better method is to insert an SD card into the slot on the back at the top. But make sure it’s an SDHC card that’s 32GB or smaller.

I found the SD card slot to be unusually tight, making it hard to get the card out. More importantly, I also could not get the device to work with an SD card, which I’m going to put down to a faulty unit. 2 In normal circumstances, I would have sent it back for a replacement, but in this case, it was a borrowed unit. So for all my testing, I used the scanner’s built-in internal memory.

But assuming you can get it working, once the data is on the SD card, you can get it onto your computer in a couple of ways. One is to treat it just like a memory card from a camera and use a memory card reader connected to your computer. The other is to connect the scanner to your computer using a USB cable. You can also use a tablet if you’ve got a card reader for it. One thing to watch if you connect the scanner via USB is that you have to put the scanner into USB Upload mode (press the Home button and then cycle through the mode options until you get to USB Upload).

Software. Because the scanner is self-contained, there’s no software to install on the computer. Once you download the scans to your computer, you can treat them the same as any other JPG file.

Exposure Control. There is only rudimentary control over the exposure on the camera. The default is on Automatic, but you can also make it lighter or darker by up to two stops in each direction. It works like exposure compensation on a digital camera. There’s no way to adjust things like white balance or contrast–you’ll have to do those in image editing software on your computer or mobile device.

Flip/Rotate. If you’ve inserted the film or slide upside down or back to front, you can use the buttons on the scanner to flip it or rotate it. You can also do this in an image editing app, of course, but there’s some convenience to having it come out of the scanner the right way up.

I scanned some of the most common types of film and slides to see how it performed. Specifically, I tried some old slides from the 1960s and 1970s (both Kodachrome and standard slide film), color negative film, and black and white negative film. These are mostly in the kind of condition that would be typical for film stashed in a box in the attic–dust and scratches and color shifts and all. I’m using the same set of images that I’ve been using with other scanner reviews to enable better apples-to-apples comparisons.

You can open the full-size results below by clicking on each thumbnail. I have deliberately not applied any corrections to these, and obviously, there’s going to be huge variance based on the original slide or negative. Some of these are obviously underexposed, and some out of focus. I also haven’t cleaned up any of the dust and scratches–these are straight out of the scanner.

The general process with this scanner is pretty straightforward. In fact, its simplicity is one of its chief virtues. Unlike some fancier and more complicated scanners (that admittedly also have more features and capabilities), there’s not much to jam or fiddle with. You manually insert the slide or film into its hold and then slide it into the slot. You get a live preview projected onto the scanner’s screen that’s helpful for lining it up.

You can digitally rotate or flip the image. You could do that in post-processing, too, of course, but doing it now saves a step later.

And then, to take the scan, you just press the button with the camera icon. It only takes a second or two to save the image.

This is a very simple and compact option. It’s also inexpensive. It’s best suited to situations where you have a relatively small number of images to scan and want to be able to manually select which to scan. The lack of bulk scanning features makes it much less suitable for digitizing a box of images at once. But for jobs where the number of images to be scanned is in the dozens or even low hundreds, it’s very doable, very cost-effective, and the results are good.

More demanding uses–including larger numbers of images or more fine-tuned control or higher resolution–will benefit from a more advanced scanner. But for reclaiming some old family slides and films, this is an option well worth a look.