The Canon Rebel T6 doesn’t come with a memory card as standard. So here are some recommendations for SD cards for the Canon Rebel T6 that offer a good combination of working well in the T6, reliability, being readily available, and good value for money. 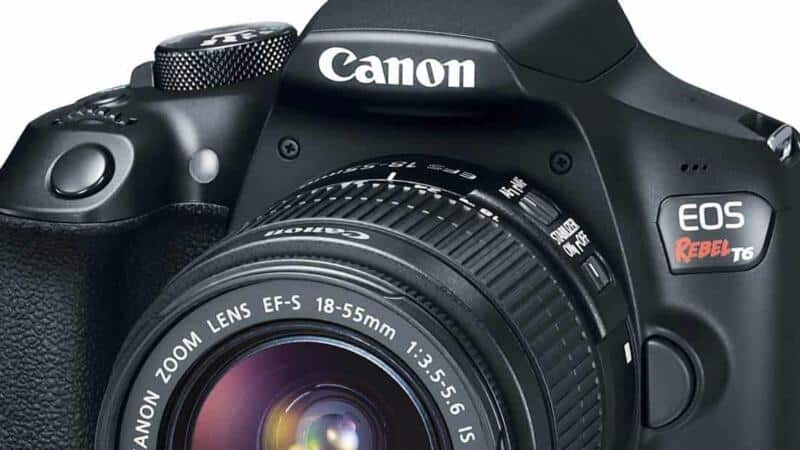 The Canon EOS Rebel T6 doesn’t come with a memory card as standard.

Some retailers offer bundles that do include a memory card. If you’ve picked up one of those, great–you’re all set to go shooting. But if you don’t have a card, here are some recommendations for SD cards for the Rebel T6.

The good news is that as impressive as the T6 is, it’s not especially demanding on the memory card. That means you don’t need to fork out the big bucks for the latest and greatest and fastest memory cards out there. But you still need to get a good one. Some are more reliable than others, and there’s a surprising number of counterfeits around.

For those who just want to cut to the chase, here are some quick recommendations. Any of these makes for a good choice of SD card for the Canon T6.

You can find more details about these, as well as other alternatives, below.

The Rebel T6’s manual isn’t especially helpful in recommending which memory card to get. If you take a look at page 5, under Compatible Cards, it says you can use SD, SDHC, and SDXC cards. It says to get a card that’s Class 6 or higher. And it also says:

The camera can use UHS-I cards, but since it is not compatible with the UHS-I standard, reading/writing speeds will be equivalent to SD Speed Class 10 at most.

What does that all mean, anyway?

So what I’m trying to do here is cut through the jargon and provide some practical recommendations for what memory card to get so you can get out taking photos and shooting video with your new T6. My priorities here are cards that not only work well in the T6 but are a combination of being reliable, readily available, have a good selection of memory sizes, and are good value. There’s no point buying a high-end, super-fast, and expensive memory card because the T6 can’t take advantage of those–so I’m not including them here. I’m also not including every single card that will work in the camera.

Memory card manufacturers release new models of memory cards all the time. And because of the way the market works, sometimes these newer and faster cards can be cheaper and more readily available than the older, slower versions. That’s why some of the ones I’ve included here are technically faster than you need (many are the UHS-I type the manual mentions, for example)–but they’re likely also a good combination of value and availability. I’ll do my best to keep this list updated.

A natural question is what size to get. Many of these come in memory sizes from 8GB up to 128GB. They’ll all work in the T6, and choosing between them basically comes down to the convenience of not running out of space to take new photos or shoot new video.

Personally, I’d be inclined toward the 64GB to 128GB sizes. Or, even better, a couple of them–some of these cards come in 2-packs that are good value, and I always like to have a spare on hand if possible. The 256GB and 32GB sizes are also good, but the 8GB and 16GB are much less convenient because they fill up that much more quickly (and they’re also becoming harder to find as storage capacities creep up with newer SD card models).

So here are some recommendations for SD cards for the Canon Rebel T6.

Memory cards have a bunch of codes and acronyms that are used to describe their capabilities. Here are the main ones relevant to memory cards for the Rebel T6. (I have more details on these ratings and codes on my Fastest SD Cards page.

Recommendation: Both SDHC and SDXC cards are compatible. There’s no functional difference in speed–just storage space.

UHS-I. This refers to something known as Ultra High-Speed Bus, which is the technology behind how the camera interfaces with the card. So far there’s UHS-I (sometimes written, incorrectly, as UHS-1) and UHS-II.

Recommendation: As the instruction manual says, there’s no harm in using a card that’s rated with UHS-I (or even UHS-II), but it won’t give you any extra benefit in this camera.

U3. This is the speed class rating. U3 is designed to support 4K video recording at a sustained video capture rate of 30MB/s. The other video ratings you’ll see on cards are C10 (Class 10) and U1.

Recommendation: Cards with a U3 rating are the safest bet, especially if you plan to record video, because they’re designed to handle a constant stream of data being written to the card. If you’re solely doing still photos, U1 will work fine too.

There are a lot of counterfeit memory cards out there, so it’s always a good idea to purchase from a reputable retailer. I buy most of mine from Amazon and B&H Photo. Best Buy, Target, and Adorama are also good options

It’s a good idea to format the card in the camera, not on your computer, and to format it regularly. But if that’s not possible or not what you want to do, you can also format cards using a computer. But there are some things to know when formatting SD cards to minimize the risks of your camera having problems with them. So I’ve put together guides on how to format SD cards on Mac and how to use the free SD Card Formatter app for Windows or Mac.

And while memory cards are remarkably resilient, just like any electronic product they can and do fail. So regular backups are very much recommended–here are some ideas.

What If I Accidentally Delete the Photos on a Memory Card?

It doesn’t necessarily mean you can’t recover them. There are apps available to help you try to recover deleted photos from a memory card. I’ve put together some recommendations here.