How to Put Your Image ALT Tags to Work in Wordpress

Most of the time, you’ll never see your image ALT tags. But they matter. 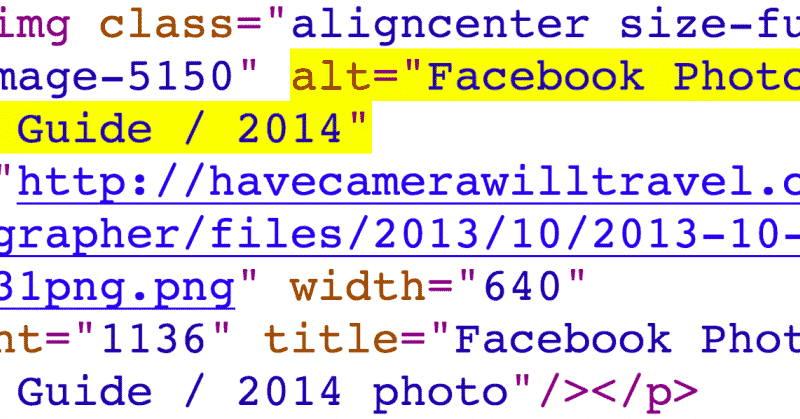 Back in the days of dial-up internet access, you’d often see the text of an ALT tag displayed while you waited for an image to load on a page. These days, with fast broadband connections, that’s rare. But that doesn’t mean that ALT tags have disappeared. Even if you don’t see them in normal web browsing, they matter.

ALT tags were originally adopted for accessibility reasons to make it easier for screen readers. Those are web browsers that read text for visually impaired visitors to your site. Since those users obviously can’t see the image well, or at all, they need a text description to understand what the image is. Logically enough, ALT stands for alternative text, and it’s that text that the screen reader reads aloud.

But Google–and presumably other search engines, as well–uses that ALT text in a related but slightly different way: to help its search algorithms better judge what is in an image and how it might related to a particular search term.

The other image tag that matters for SEO is the Title attribute. But that’s less important than the ALT tag (but the title attribute does provide the tool tip when users roll the cursor over the image).

As Matt Cutts, Google’s former anti-spam head guru, explained it, the importance of the ALT tags is that it helps describe the scene and helps narrow down what the image is about.

Adding an ALT tag is very easy to do, and you should pretty much do it on all of your images. It helps your accessibility, and it can help us understand what’s going on in your image. [Matt Cutts, Google]

The ALT tag isn’t the only factor in determining whether your image or page gets found, but it is one that matters. And it’s one you have direct control over.

The Ideal Approach in Wordpress

The Wordpress uploader makes it easy enough to do it–there’s a field directly under the Caption field. 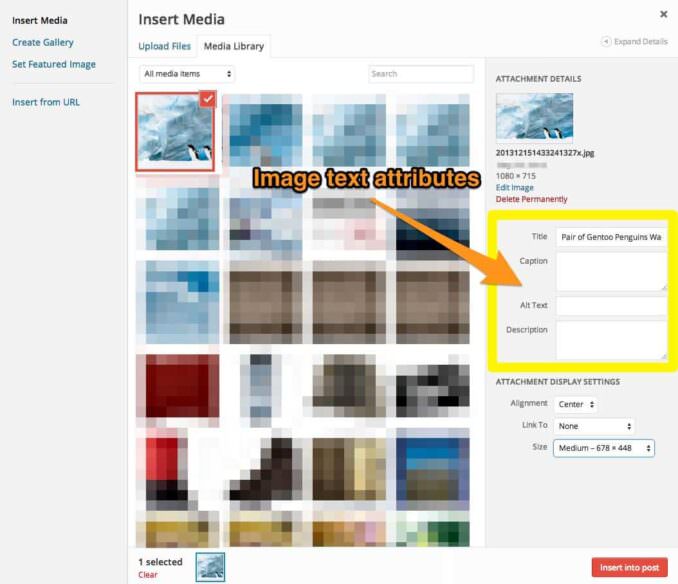 You can also input the information in the Media Library. 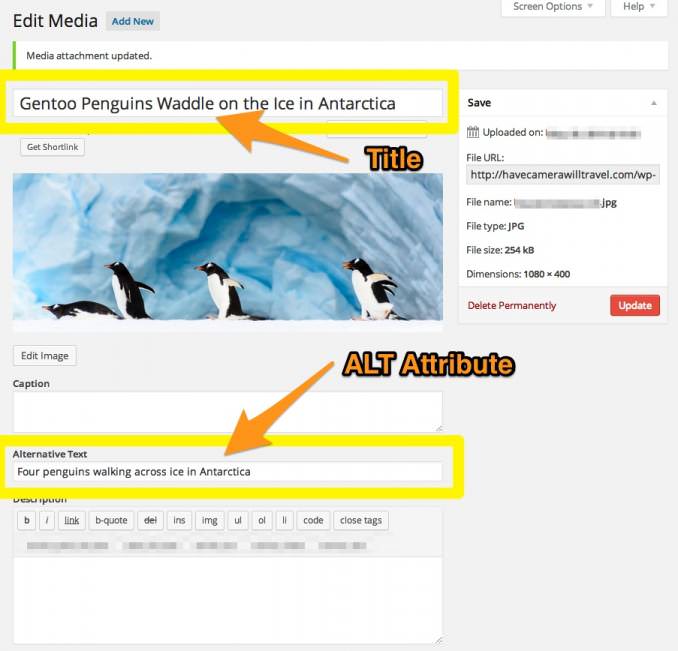 But in practice, I get lazy about manually inputting ALT text. As a photographer, my posts tend to have quite a few images. And going back and typing in ALT tags for all the images I’ve already uploaded isn’t high on the list of things I want to spend my time on. It’s also not entirely effective, because adding the ALT text after an image has already been embedded in a post won’t edit the ALT information that’s actually in that post. Iit will only affect the next time you embed that same image in another post (or re-embed in the same one).

There’s a Wordpress Plugin for That

So what to do? Have someone or something else take care of it. No, automated SEO isn’t ideal. But it many cases it’s better than nothing. And as with so many Wordpress problems, there’s a plugin for that.

Different plugins tackle the problem differently, from entirely automating the process to making it easier to edit the ALT fields more quickly. Here are some of the best I’ve come across.

The most automated way to tackle the problem is with the SEO Friendly Images plugin. 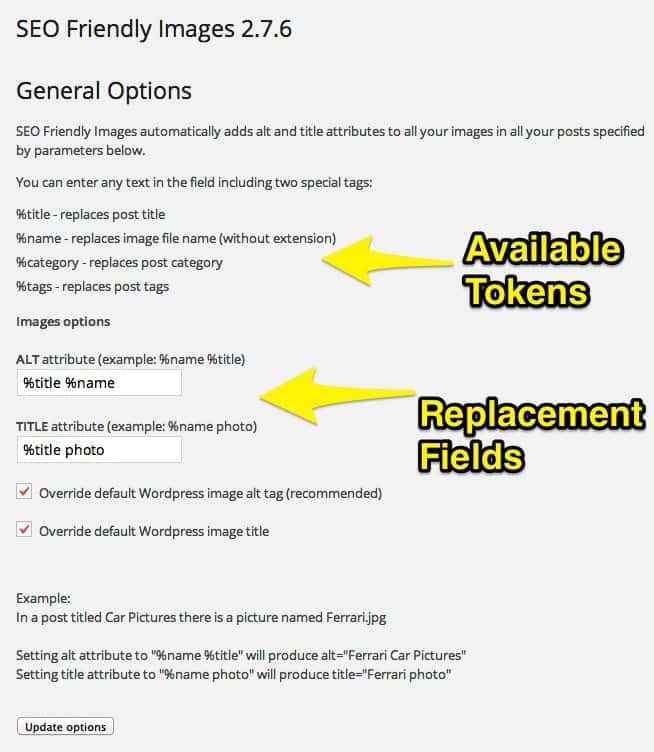 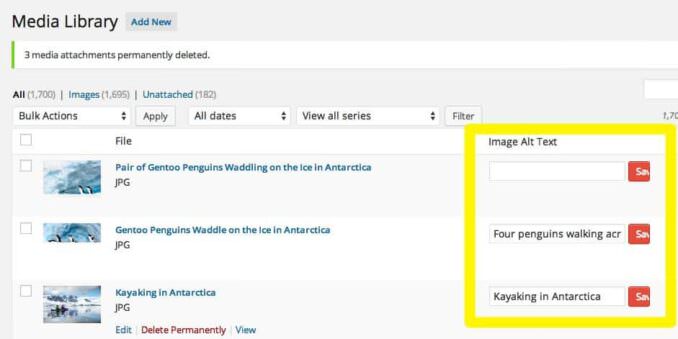 Among the features of Faster Image Insert is the ability to edit the info of the images you’re uploading in bulk. 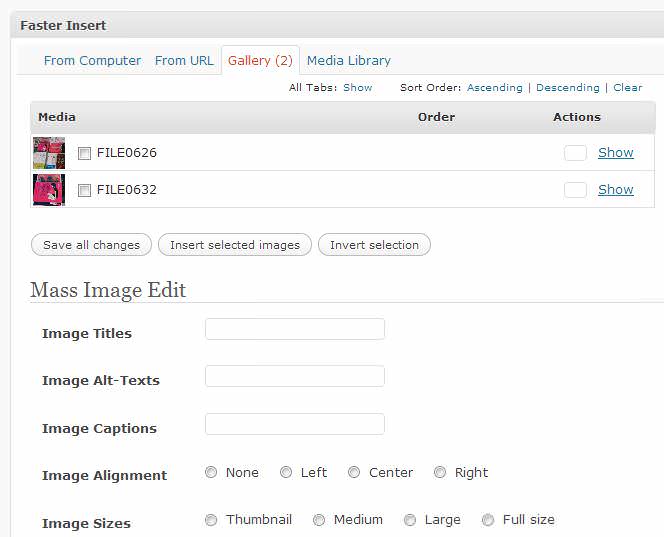 Other Things You Can Do to Help with Image SEO

Google has said that it treats the ALT tag as the most important textual information about an image.

But it’s not the only factor that goes into their algorithm. Some of the others that you have direct control over are the Title attribute, the filename, and the textual context around the image on the page. I’ve found captions to be an especially useful tool for this, in part because people often seem read image captions even if they’re skimming the page. How much each of these matters relative to the others is all part of Google’s secret sauce. The Title field is also used for tooltips when a user rolls the cursor over an image.

Wordpress’s built-in media manager includes fields for Caption and Description. Use both if you want to, but at least in terms of SEO, neither is an important as the ALT tag. You can find information on the purpose of each of Wordpress’s media fields is here.

What Not to Do

Google’s entire search empire is founded on giving users the best results for what they’re looking for. It protects that reputation fiercely, which is why it invests so much time and energy into anti-spam efforts.

If you’re jamming 20 or 30 keywords into your ALT tags, Google doesn’t like that. Keyword stuffing is frowned upon no matter where it’s done. 125 characters is the recommended maximum length for the ALT attribute, but 4 to 7 words seems to be widely regarded as the sweet spot.

How to Put Your Image ALT Tags to Work in Wordpress