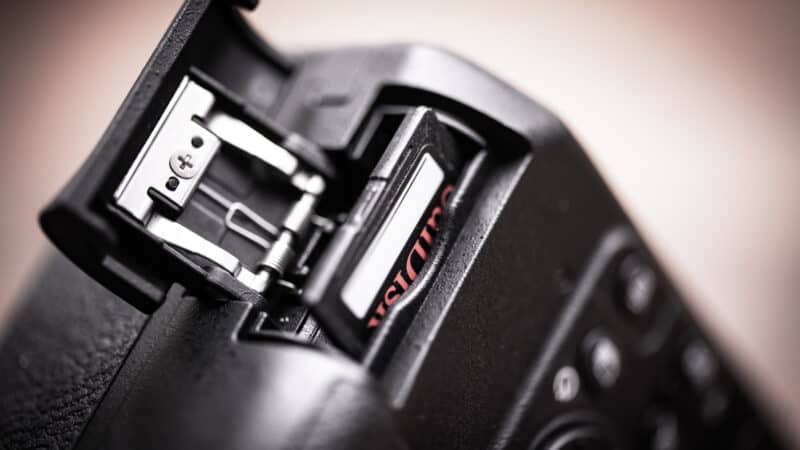 Once you have bought an SD card that’s compatible with the Nikon D3500, there are two things you’ll need to do with it before you start shooting.

Neither is difficult to do, and here’s a quick rundown of how to do them. You’ll then be ready to start shooting.

Turn the camera off.

Open the SD card compartment. If you’re pointing the camera as if to take a photo, it’s on the right side at the bottom.

Gently slide the cover in the direction of the arrow that’s marked on the door.

Gently push the card down into the camera until it clicks into place. It should stay in place flush with the slot. Don’t force it. If it doesn’t go down easily, the first thing to check is that the card is the right way around.

Close the SD compartment door by folding it down and gently sliding it back into place.

Things Worth Knowing About Putting SD Card in Nikon D3500

The SD compartment door hinge is quite flimsy and can easily snap off if you’re too rough with it. The safest course is to keep the door closed when you’re not actively using it. That will help prevent it from being snapped off if you bump the camera or put the camera in/out of a camera bag.

To format an SD card in the Nikon D3500, use the menu system on the back of the camera. You can find it under:

Move the active selection to Yes and click OK to confirm that it’s about to wipe the memory card. (If you accidentally format the card, there’s actually a good chance you might still be able to recover data from the card. I have more information on how to do that here.)

It will briefly show you the status message of “Formatting memory card” and then revert back to the Setup Menu (there’s no “success” message).

Things Worth Knowing About Formatting SD Card in Nikon D3500

It’s a good idea to format the card in the camera rather than using your computer and to format it regularly. But if that’s not possible or not what you want to do, you can also format cards using a computer. But there are some things to know when formatting SD cards to minimize the risks of your camera having problems with them. So I’ve put together guides on how to format SD cards on Mac and how to use the free SD Card Formatter app for Windows or Mac.

Strictly speaking, you can probably get away with just inserting the SD card into the D3500 and shooting away. But it’s always good practice to format it first. Not only does this wipe any data on the card to free up space; it also prepares the card with the filesystem and folder structure that the D3500 needs. It will also alert you if there’s a problem with the card.

NB: It’s important that you don’t remove the card while the camera is writing to the card (i.e., saving photos or videos). Doing so can corrupt the data on the card. So make sure the small light indicating activity on the card isn’t on. And it’s the safest practice to power the camera off when removing the SD card.

Gently push down on the card. A spring-loaded release should pop the card up a little so that you can easily grab it and remove it.

Again, don’t force it–it should come out easily after that initial spring release.