The battery life for the Nikon D3400 isn’t bad, but it’s pretty much inevitable that you’ll run into situations where your battery is running out of juice right when things are getting interesting. So having fully charged spares on hand is always a good idea–a truism with any digital camera, not just the D3400.

If you’re after a spare battery for a Nikon D3400, or need to replace a dying one, the obvious choice is to get the Nikon-branded replacement batteries. And while that’s a safe way to go, there are also options with some other features that you (and your wallet) might prefer.

So here’s a quick rundown of different Nikon D3400 battery and charger options that work well with this camera. It includes Nikon original versions as well as some good options from aftermarket manufacturers.

Nikon makes two models of batteries that will work in the D3400. The best option, and the one that comes with the camera, is the EN-EL14a. Another similar model, EN-EL14, will also work just fine but will drain more quickly. That’s because the EN-EL14 is rated to 1030mAh, while the EN-EL-14a is rated for 1230mAh. In short, the “a” version holds more juice. There’s really no reason to seek out the older model–go with the newer version if possible.

Obviously, Nikon has their own, and they’re the ones that they recommend. They’re the safe option. But they’re not necessarily the most affordable option.

But I’ve also found some of the more affordable aftermarket versions to work well, particularly the batteries from Wasabi Power. I’ve used their batteries for several years in other cameras and found them to be one of the better aftermarket camera battery manufacturers.

The Wasabi Power batteries that I’ve found to work well in the Nikon D3400 have a model number of BTR-ENEL14-JWP. It also has a capacity rating higher than either of the Nikon models: 1500mAh. I’ve been using these in my D3400 and found them to work well. You can buy them individually, in 2-battery packs, and bundled with a USB dual charger. 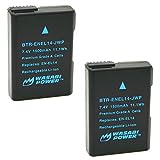 There are a few different varieties of battery chargers for the Nikon D3400, ranging from the simple, single-battery AC charger provided by Nikon to dual-bay USB chargers from aftermarket manufacturers. Here’s a quick rundown of the options.

The D3400 comes with a battery charger. It’s a single-bay AC charger, with the prongs for the wall socket folding back into the body of the charger. If you need to replace it, the one manufactured by Nikon has the model number MH-24.

As always, Nikon recommends using their own branded products. But something I don’t like about the MH-24 is that it only works with an AC power outlet–and one with enough room to fit the charger, at that. That’s not always convenient when traveling.

But there are other good options from aftermarket manufacturers, some of which use a much more convenient, if slower, charging method: via USB. That saves me having to carry around a bunch of different AC adapters whenever I travel (I like to travel light). It also means that I can charge my camera batteries from an external powerbrick even while I’m out and about taking photos.

My current favorite is the NiteCore UNK1 USB charger. It has two bays, one for the EN-EL14/a and another for the EN-EL15/a batteries like the ones the Nikon D810 takes. If you’re only using the D3400, you’ll only be using one of these bays. It also has a small LED screen that shows a more precise percentage for charging status as well as battery health and the current flowing. It’s smaller and lighter than the official Nikon MH-24 charger and can be powered via USB by an external powerbank, AC charger, or in the car. 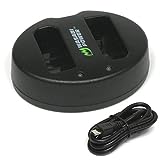 An Even More Versatile Alternative

The main charger acts as a docking base. Here’s a direct link for the adapter plates for the Nikon D3400’s EN-EL14/a batteries.

Images and product information from Amazon PA-API were last updated on 2021-08-04 at 20:09. Product prices and availability are accurate as of the date/time indicated and are subject to change. Any price and availability information displayed on Amazon Site at the time of purchase will apply to the purchase of this product.