Some recommendations for which SD memory card to get to work well in the Nikon D7500 camera.

By default, the Nikon D7500 doesn’t come with a memory card. Some retailers put together bundles that do include one, but chances are that you’ll need to pick up an SD card separately. So here’s a rundown of what to look for in an SD card for the Nikon D7500 along with some practical recommendations.

Quick Recommendations for SD Cards for the Nikon D7500

If you just want to just cut to the chase, here are some quick recommendations.

Any of these make for a good choice.

First, the basics. The Nikon D7500 takes SD cards. It has a single memory card slot.

The D7500 mode that’s most demanding on the memory card speed is when recording video. When shooting photos, the camera will take advantage of its own internal buffer memory, storing up to 100 photos internally before you start to see any slowdown as it moves those from its internal memory to the memory card.

But video works differently–if the buffer were to fill up, there’s no way to slow down the shutter speed to wait for the card to catch up. And with bitrates of up to 125 Mbps (megabits per second) in the high-end 4K video modes available on the D7500, that creates a large stream of data that needs to be written to the memory card very quickly. And that requires a card with a fast sequential write speed.

In other words, having an SD card that’s fast enough is essential for shooting in the top video modes but more a matter of convenience when shooting still photos.

Nikon’s instruction manuals (or those from many camera manufacturers, for that matter) are not especially helpful in suggesting which memory cards work best in the camera. For the D7500, this is their guidance for Approved Memory Cards (from p.356 of the manual):

The camera supports SD, SDHC, and SDXC memory cards, including SHDC and SDXC cards compliant with UHS-I. Cards rated UHS Speed Class 3 or better are recommended for movie recording; using slower cards may result in the recording being interrupted. When choosing cards for use in card readers, be sure they are compatible with the device. Contact the manufacturer for information on features, operation, and limitation on use.

With that in mind, here are some recommendations for memory cards to use in the Nikon D7500. I’m basing these on a combination of Nikon’s recommendations, my own real-world speed tests of SD cards, and actually trying them in a D7500.

My emphasis here is on cards that meet the requirements to use all of the camera’s features, are readily available at major retailers, and are cost-effective. But these are by no means the only SD cards that will work in the D7500. My objective here, after all, is to help choose a good card that works so you can get on with the fun stuff, not to document every possible card that works in this camera. I have, however, tried to include a few different brands. 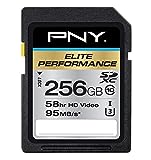 This particular card (model SDS2 Canvas Select Plus) isn't the fastest in Kingston's range, but it's fast enough to work well in this camera. It's available in sizes from 16GB through 512GB.

What Size Memory Card Works Best in the Nikon D7500?

The D7500 will work with memory cards from 16GB up, including some of the larger SDXC cards available these days in the 256GB+ range. Which size you choose to use comes down to convenience and your own preferences. The larger the card, obviously, the more you can shoot before filling it up.

The size of the photo and video files created by the D7500 depends on what settings you’re using. For instance, if you’re shooting photos in the JPEG Normal setting, the files will be much, much smaller than if you’re shooting in the RAW 14-bit uncompressed mode.

The same goes for video. The top-end 4K video modes are recorded at higher bitrates than lower-resolution modes, so those files will be much larger for a corresponding duration of footage.

Here are some estimates. These are based mostly on Nikon’s own figures, but bear in mind that they’re only estimates. Any compressed formats will vary slightly from file to file–that’s the nature of how these types of compression work. So it’s possible you might get a few more or a few less. These are for the DX crop modes; the files when using the D7500’s 1.3x crop mode are significantly smaller.

Again, these should all be treated as estimates, and in real-world shooting, you might get slightly different results.

While it’s possible to format SD cards in a computer, it’s much better practice to format them in the camera. That reduces the places where something can go wrong.

The basic way to format an SD card in a Nikon D7500 is to use the menus; the steps for that are outlined below. There’s also a shortcut way to do it, which I’ve detailed separately here.

If you format the card before you’ve downloaded them, it might still be possible to recover them. To do that you’ll need to fire up the computer–it’s not something that you can do in the camera. I’ve put together an overview on how to recover deleted photos from a memory card here.