Calibrating a Display with the i1 Display Pro

A correctly calibrated display helps in your photo processing workflow and ensures better end results. Here’s how the i1 Display Pro performs. 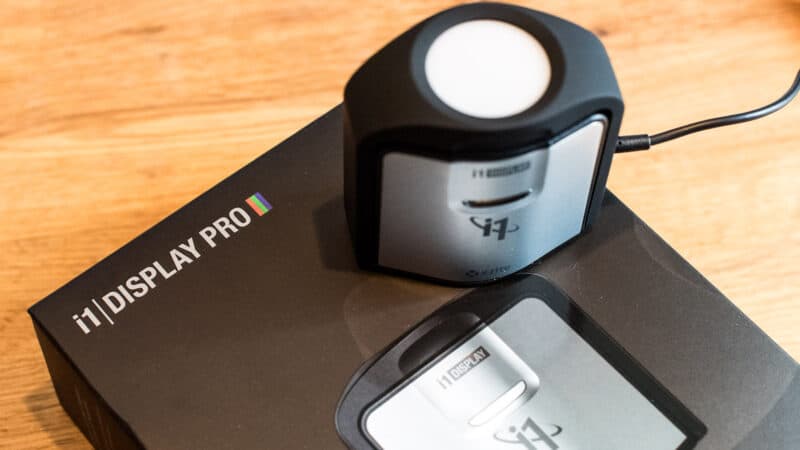 A properly calibrated computer display can make your workflow much more efficient and your photos display better on other devices or when you print them. It helps with consistency across devices.

Lately I’ve been testing out some of the major display calibration devices on the market. I’ve previously written about the Spyder5PRO from Datacolor.

Here I’m testing out the i1 Display Pro from X-Rite, the parent company of Pantone.

All of these devices come with a hardware component and a software component that work together to produce a color profile that acts like a virtual corrective filter over your display to help ensure that the colors you’re seeing on screen are accurate representations of the data that’s in the file. The software emits colors and tones on the screen. The hardware colorimeter detects the actual output and sends that information back to the software. The software then compares the values it expects to see and what the colorimeter actually sees and then calculates a profile to compensate. The end result should be a display that is a much more accurate representation of the file.

An installer disk is included in the box.

Assuming your computer has a DVD drive, and quite a few laptops don’t anymore–the upside of having a DVD-ROM installer is that you can install it offline. The downside is that the version on the disk is probably out of date, so you’ll need to run the updater anyway. The version I got on disk, from a box off the shelf in 2016, dated back to July 2014. Updating involved a complete reinstallation, downloding the nearly 600MB file, and yet another annoying restart of the computer. If you just want to go straight to the latest version, skip the DVD and download it directly from X-Rite’s website.

When you fire up the i1 Profiler software you’ll get the main menu where you choose what devices you want to calibrate and whether to run in basic or advanced mode. 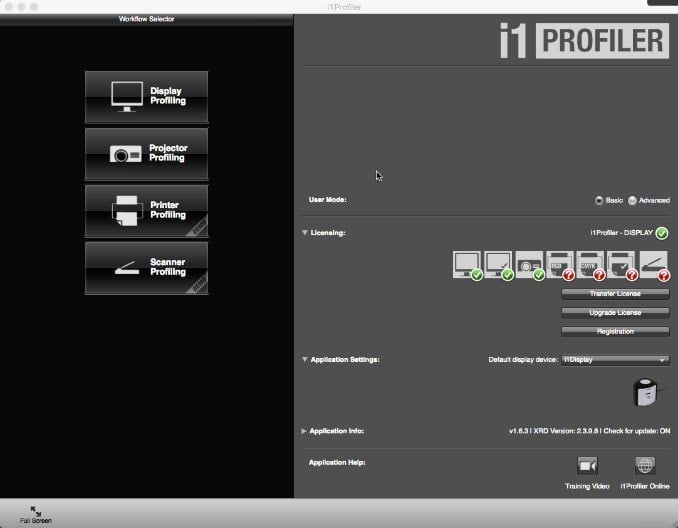 Next you’ll set the display type and target parameters. For white point, it defaults to D65 (6500K), and for luminance to 120 cd/m2, both of which are pretty standard recommendations.

The middle panel is where you choose options. The bottom panel shows which step you’re on in the process. The left panel offers detailed explanations related to the options. 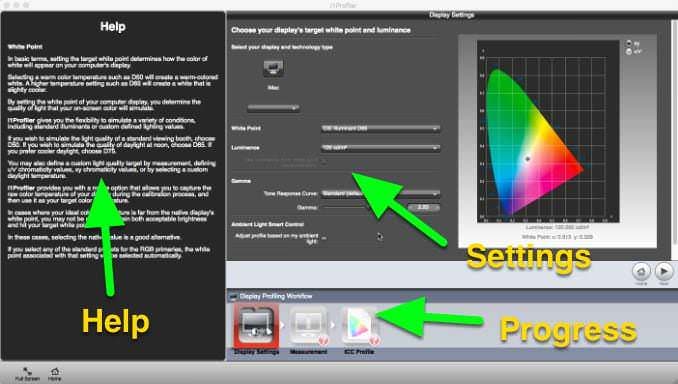 Once you follow the process through, it’s time to begin the actual measuring. The first step is to measure the ambient light. For that, you leave the colorimeter on the desk with the semi-opaque circle pointed up.

The next steps involve measuring the output from the display itself. For that, you rotate the colorimeter’s cradle to expose the sensor and lay it flat against the screen. You may have to tilt the screen back a bit so that gravity holds it flush against the surface. 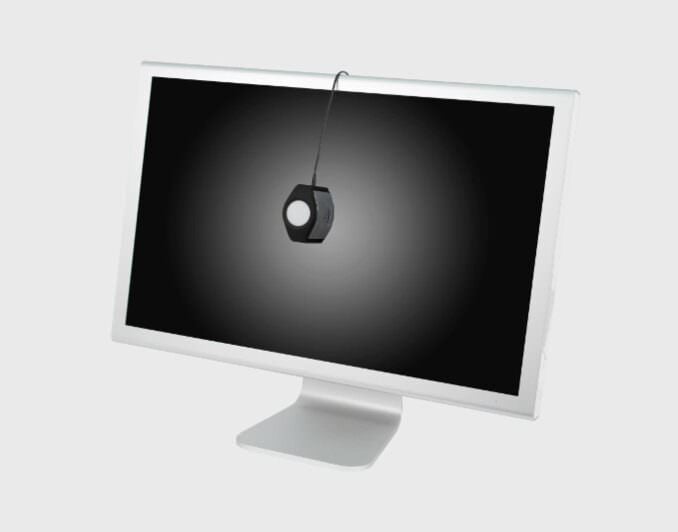 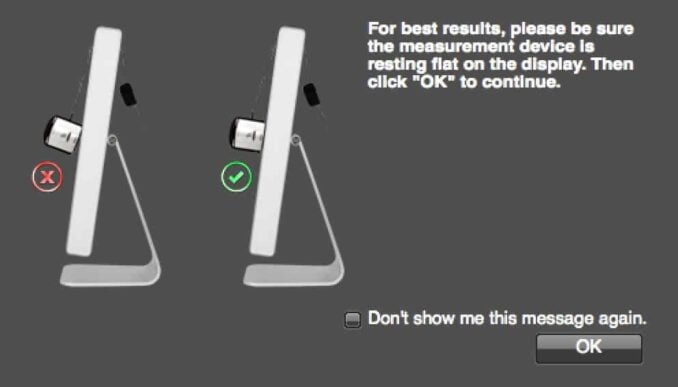 Then you’ll need to adjust the screen’s brightness to a good starting point. The software guides you through that process so that you get the results into the green zone. (Tip: If you’re using a Mac, the display slider (System Preferences > Display) gives you finer control than the brightness buttons on the keyboard.) 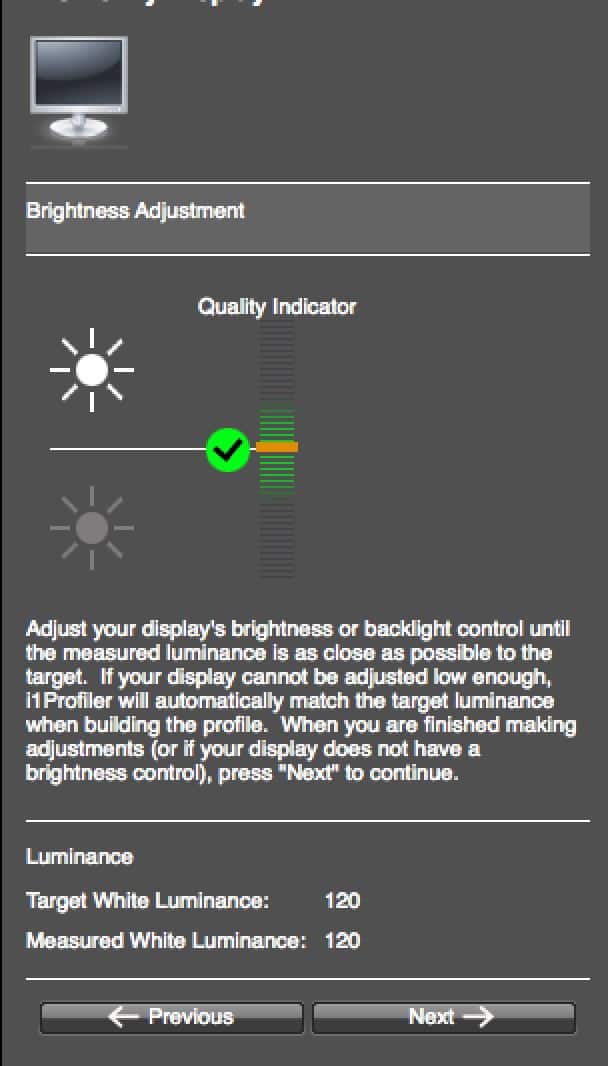 Then sit back for a few minutes while the software does its thing. You’ll see it cycle through colors and tones as it outputs values it knows and then compares what the colorimeter sees with the values that the software expects. 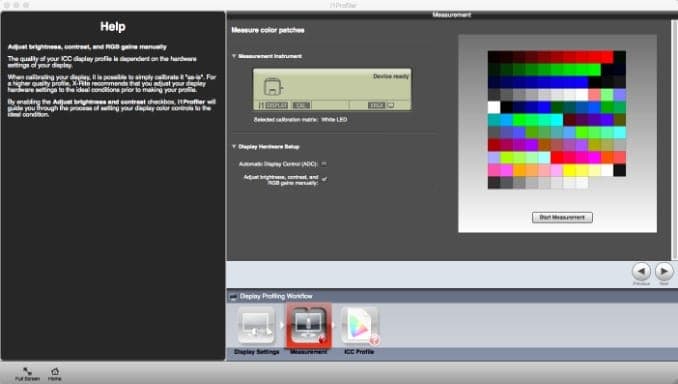 Once the measurement process is done, the next panel is about where to save the profile that’s been generated, how often to remind you to do recalibration, and whether to use the constant ambient light monitoring option.

Once you hit the Create and Save Profile button, the new profile will be automatically applied. There’s an option to compare profiles with previously generated ones, but I couldn’t get it to work with profiles generated by other devices. 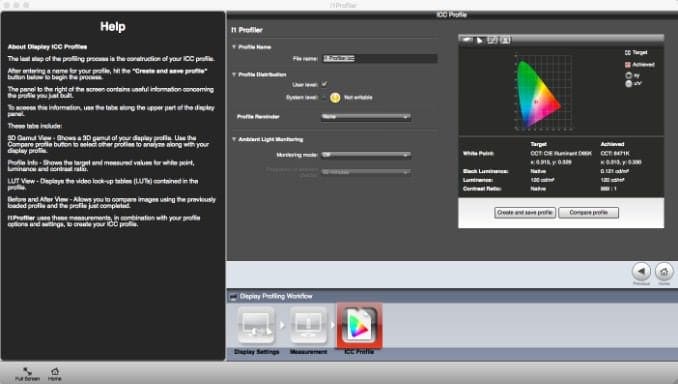 You can also see before/after comparisons that show the new profile compared with what you were using before. There are several built-in images you can use, or you can set your own custom image. 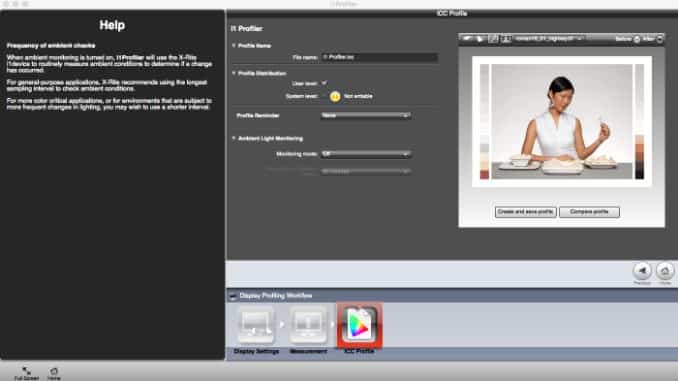 In theory, colorimeters should create profiles that objectively indistinguishable. But in practice, the results often differ subtly.

In comparing it alongside the results on the same display in the same conditions with the profile produced by a Spyder5PRO, I found that the i1 Display produced a profile that was noticeably warmer. To be sure, you really only notice it when you switch side-by-side, but it is there. And to my eyes the midtones were also a bit muddier. I also tested with an X-Rite ColorMunki, and both the X-Rite products produced profiles that were warmer than the Spyder5PRO.

The i1Profiler software is compatible with Windows and Mac. The colorimeter works with desktop and laptop displays as well as projectors.

In addition to the colorimeter sensor, with an integrated USB cable, there’s a quick start guide and a DVD-ROM with the i1Profiler software.

Software. I’ve been a long-time user of the X-Rite ColorMunki, so I’m pretty familiar with X-Rite’s software. But I have to say that after using the Spyder5PRO software again, the product from X-Rite feels very clunky. The interface is unnecessarily complicated and not particularly intuitive. Overall, it feels like it was designed by engineers. To be sure, the i1 Display Pro does offer more control and options that the Spyder5PRO, so extra clutter is going to be inevitable. But overall, there’s room for X-Rite to improve in the software.

Hardware. There’s not much to complain about with the hardware. It works well.

Overall. The results are good, and X-Rite is a leader in consumer and pro color calibration. But although I’ve been a long-time user of the ColorMunki, after using the Spyder5PRO and comparing the results, I’ve found myself drawn back to the Spyder5 system for my particular setup. That said, the i1 Display Pro is a solid and reliable choice.

It’s also not a direct choice between the i1 Display Pro and the Spyder50PRO; the former profiles projectors, while if you want that in the Spyder5 range you’ll need to go up a step in sophistication and price to the Spyder5ELITE.

The i1 Display Pro is available at B&H Photo and Amazon.

Images and product information from Amazon PA-API were last updated on 2022-06-29 at 17:30. Product prices and availability are accurate as of the date/time indicated and are subject to change. Any price and availability information displayed on Amazon Site at the time of purchase will apply to the purchase of this product.

Calibrating a Display with the i1 Display Pro