My hands-on review of one of the larger and taller tripods that 3 Legged Thing have put out. This one is in their Equinox range. 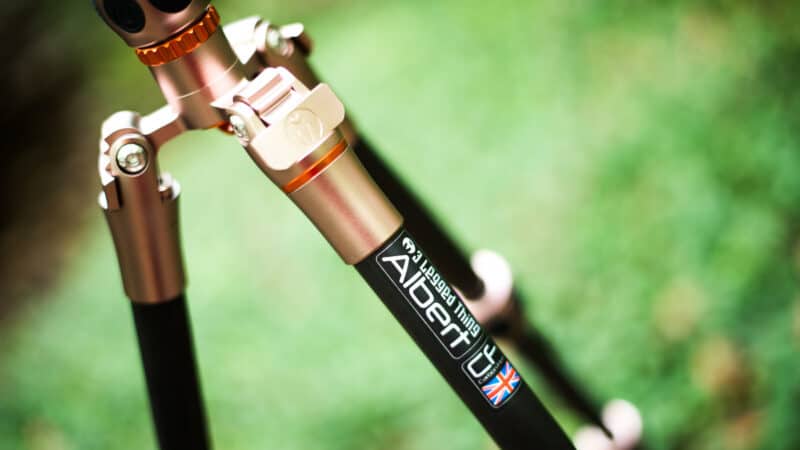 I’ve reviewed a few other tripods from 3 Legged Thing before. They’re a small British company specializing in travel tripods, and in a relatively short period they’ve managed to build a devoted following. And they give all of their tripods boys’ names. This one is called Albert.

It’s a carbon fiber travel tripod that folds down to a compact travel shape with legs that fold back on themselves. Unfolded, it’s one of the taller travel tripods on the market, stretching up to a maximum height of nearly 69 inches (175cm). 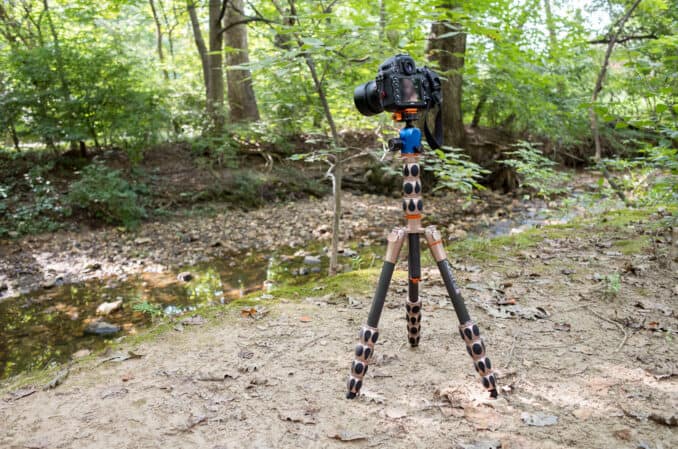 Like most of the other higher-end travel tripods on the market today, the legs fold back on the center column. In combination with the telescoping legs, it makes for a very compact package for travel. Although being a larger tripod overall than some of the others, even fully collapsed it’s still a bit bigger than some others. 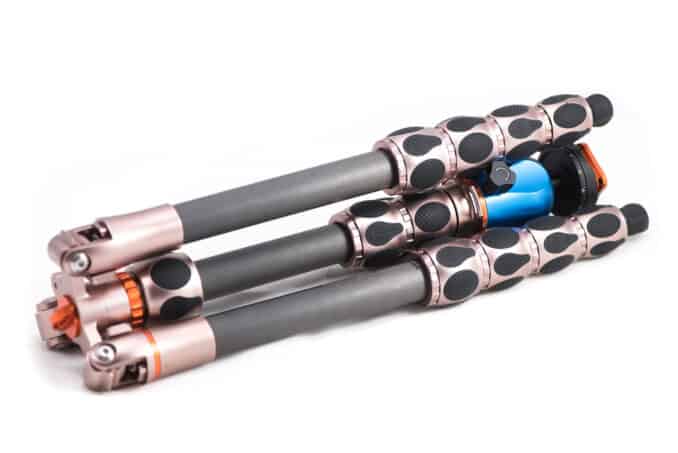 When folded out, the legs can lock in one of three shooting stances, with the legs at: 23°, 55°, and 80°. A manual ratchet lock on the top of each leg locks the position in place. As usual with this kind of tripod, each leg can be angled independently or extended to its own length. 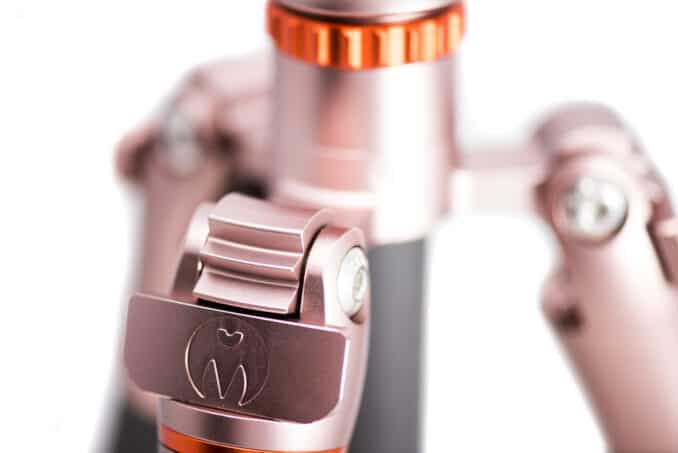 Those bulges that look a bit like furry leg warmers are the twist lock grips. The black part is rubberized for grip. I’ve found the mechanism to be smooth and the lock to be tight. 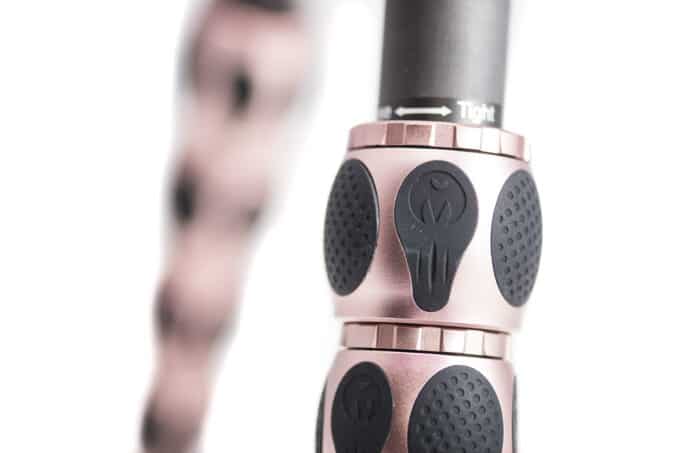 The traditional tripod stance has the legs at a 23° angle. That gives you the maximum potential height and highest load capacity, but the narrower footprint also means that the center of gravity is more critical—especially when the center column is fully extended.

You can broaden it to a mid-level 55° angle. And for low-level shooting you can remove the long center column and splay the legs wide at 80°. That way, you’ll get a lot of stability and a low vantage point just a few inches off the ground. The maximum load capacity reduces the wider the legs are spread.

Feet. The feet are removable and can swapped out for steel spikes or whatever other kind of feet or platform you want to attach. 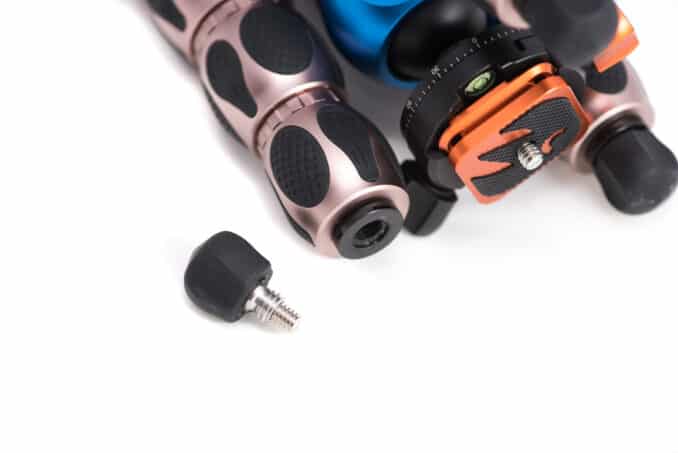 The Albert is available in different configurations. You can get just the legs and use them with another head of your choosing. Or you can get the legs bundled with one of the two ballheads 3 Legged Thing makes.

The one I’ve been using on these legs is the AirHed 360, the larger of the 3 Legged Thing ballheads (you can see the other one on my review of the Leo). 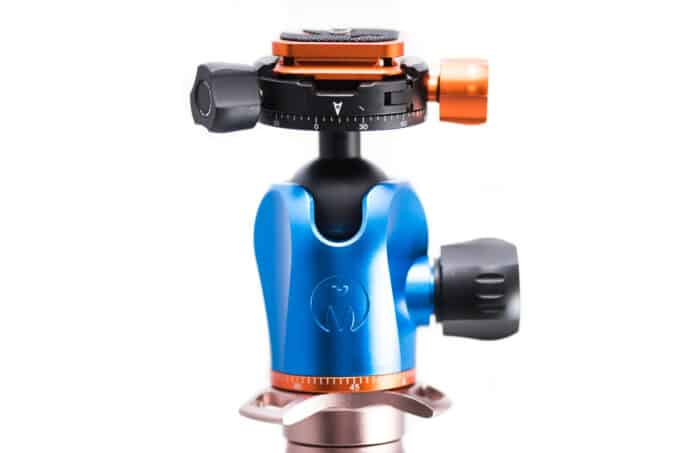 It’s bulkier than the Airhed light, and heavier. It’s also unusually strong, rated for a direct vertical load of up to 440 pounds (200 kg), down to a still-impressive 35 pounds (16 kg) at the 90° angle for portrait shots.

There are two knobs on the body itself. One controls the 360° panning base. The larger one locks the clamp on the ball. 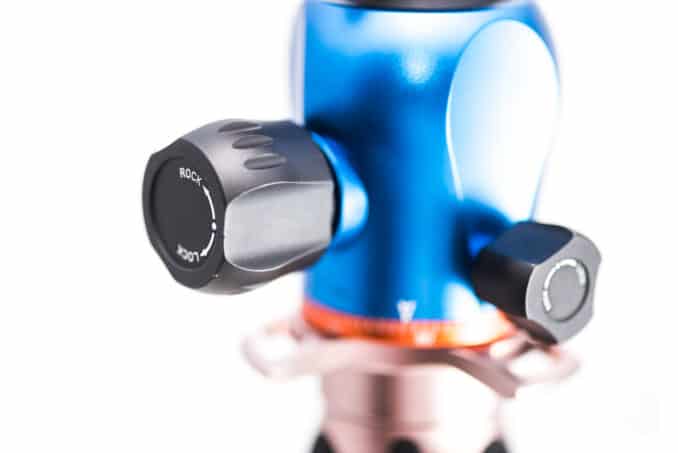 By default, it comes with a hybrid Peak Design / Arca-style quick release head, and a QR plate is included in the box. The pano clamp is also a bit unusual in that it has a separate 360° panning rotation that operates independently of the one at the base of the head. 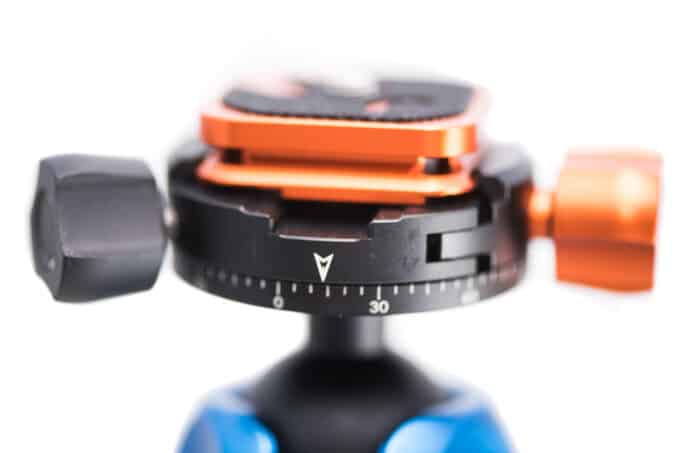 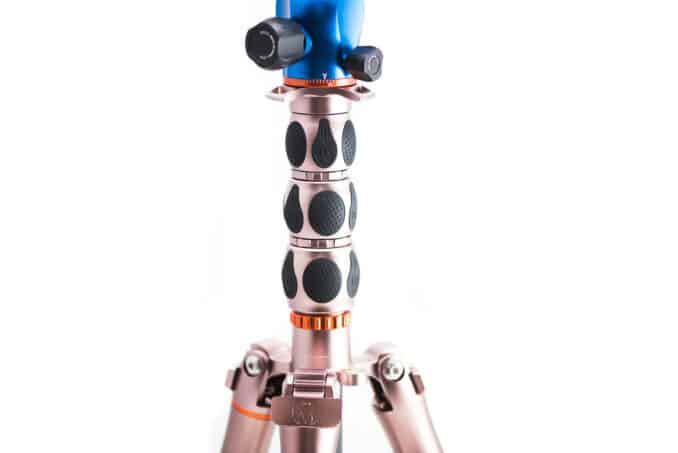 When fully extended in the upright shooting stance, it reaches a maximum height of just shy of 69 inches (175 cm). For a larger, more traditional tripod, that mightn’t sound like much, but it puts it among the taller compact travel tripods. 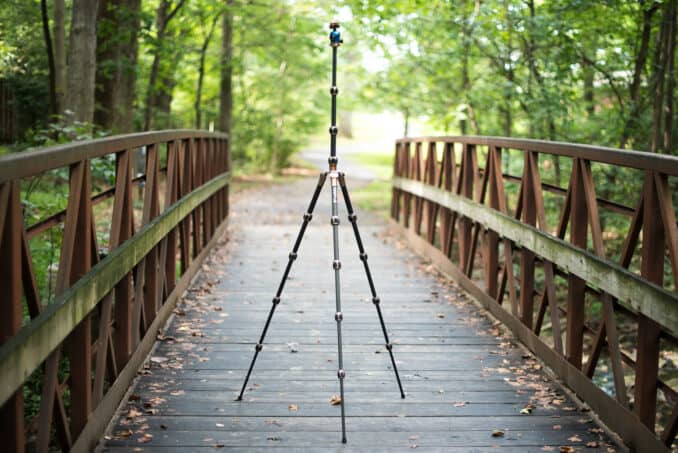 Monopod. You can also create a monopod by unscrewing one of the legs (the one with the orange ring at the top), removing the central column, and screwing the leg into the column. You can use it with or without the ballhead.

It comes with a retro-styled canvas bag with shoulder strap. If you get the bundle with one of the heads by 3 Legged Thing, it also includes a QR plate.

This is one of the larger compact travel tripods. It folds down to a relatively compact bundle. But it’s also one of the heavier tripods in this class, especially compared with other carbon fiber travel tripods. (The precise weight depends on which head you put on it. With the AirHed 360, the combination comes to 4.9 lbs (2.25 kg).)

The downside of the extra reach is the extra leverage that it adds. There is a definite flex down the length of the column and legs. When combined with the leverage, it undermines the tripod’s stability. With the center column extended it’s not as stable as I’d like for long-exposure shooting or timelapse, especially with the weight of a DSLR, despite the high load capacity it’s rated for.

Another thing I found is that there are a lot of twist locks. One downside of most twist locks is that the best way to check if it’s locked is to try it. As compared to, say, a lever lock, where it’s much easier to tell visually. The Albert isn’t unique in that respect, of course–it applies to pretty much all twist lock tripods. But because of the 3-section center column, the Albert has even more twist locks than most other tripods–4 on each leg and another 3 on the central column. So you have to be constantly vigilant that they’re all actually locked. It wasn’t something I would have thought of without using it.

Overall, then, it’s well-built and strong. But the very thing that makes it different–the extra height–is, in my humble opinion, its weakest feature. The Albert has a high load capacity rating, but there’s also quite a bit of flex and wobble when it’s fully extended. I can see using it occasionally to shoot over something, but when fully extended it’s not rock solid enough for me to count on it staying perfectly still for long exposures or timelapse shooting with a DSLR or even larger mirrorless setup. Smaller cameras would fare better, at least in still conditions. And if I’m not going to use the extra height, there are smaller, better options available–even 3 Legged Things’ own Leo . It just seems like they might have pushed physics a bit too far with this one.

I’ve also been using the 3 Legged Thing Leo tripod lately (you can find my review of the Leo here). It’s very similar in terms of how it’s put together and its features, but it’s smaller and much shorter. Here they are side-by-side.

It’s not as easy to find 3 Legged Thing tripods in stock in as many retailers as some other brands, but you can find the Albert at B&H Photo and Amazon.