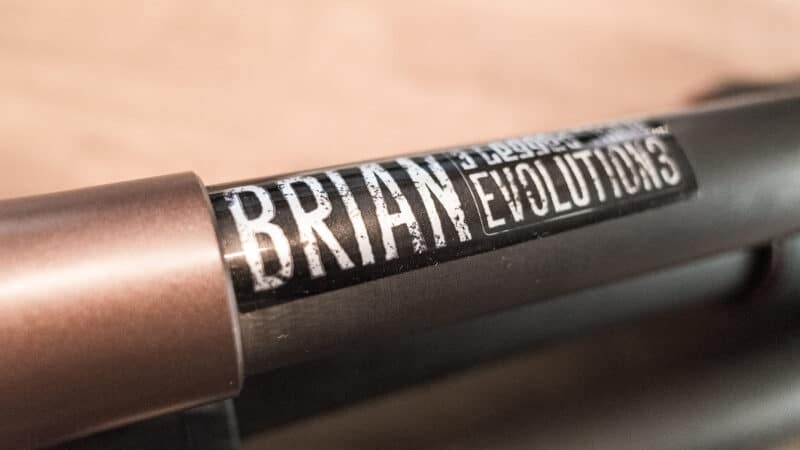 3 Legged Thing is a British company aiming to make tripods with attitude. Among their little quirks is that they embrace giving their tripod models names. As in, people’s names. There’s none of the standard model number gibberish here. Instead, there’s the Roger, the Steve, and the Nigel. (How long until we get the Donald?)

I’ve previously reviewed the Rick, which is on the smaller, lighter, less expensive, and less sturdy end of the spectrum.

This time I’ve been testing the Brian. Or, if you want to be picky, it’s the EVOLUTION 3 Brian Carbon Fiber Tripod System. Here’s my hands-on review after shooting with it.

The Brian’s legs are made of carbon. Or, as the marketing blurb puts it: “86% Pure Japanese Skyflex Pre-preg Carbon Fiber construction.” Translating that to real-world use: it’s carbon.

Like most of the current crop of travel tripods, it uses the Gitzo system of folding the legs back on itself to make for a very compact package when folded up.

They extend in five sections, which means there are four twist locks that can extend sections.

The marketing material gets a bit carried away again, referring to “ParaLock leg locking system with new TPR 80 Grips for all weather conditions.” Basically, they’re rubberized and easy to grip even with cold or wet hands. Locked, they lock tight, and I haven’t had any problem with them slipping. Like most twist-lock systems–or, for that matter, more traditional mechanisms–they can be susceptible to dirt and grit getting in there and fouling things up. But the ones on the Brian seem no more or less vulnerable to that than any of the other standard tripods.

The legs fold out and lock in place with a manual ratchet lock. It’s not spring-loaded like the Gitzo traveler series.

There’s a bubble level on the top of the legs (and another under the camera plate on the head).

Fully extended, the tripod sits at a comfortable height for all-around shooting, up to a maximum height of 72.5 inches (184.8 cm). Factoring in that this is still a light-weight travel tripod and not a heavy-duty set of monster legs, the legs of the Brian are sturdy–much sturdier than the smaller Rick tripod. You can attach weight like a camera bag to the center column to help, and if you don’t need the height, only extending the uppermost sections of the legs helps with better stability.

The feet unscrew, so you can attack other feet or mount it some other modular way using standard 3/8″ screws.

The amount of weight the legs can support depends on how widely splayed they are. There are three ratcheted angles. At its most narrow, at 23°, they’re rated for 66lb (30kg) of downforce. At 55° it’s 44lb (20kg), and spread wide almost flat at 80° it’s 22lb (10kg). But those load ratings still aren’t quite the same thing as holding it still, and that depends on things like where the center of gravity of your camera is mounted on the head, whether the legs are on perfectly flat ground, and the load capacity of the head.

One of the distinctive features of 3 Legged Thing tripods is their multi-section center columns. These allow the center column to extend quite a lot behind the standard sitting height. That adds quite a lot more versatility if setting the camera height is critical or you’re very tall.

But the extendible center column does have another purpose, and that is that it can be detached from the legs, attached to one of the legs that is detachable, and used as a monopod or extension pole. So you’re really getting a tripod and monopod in one package, a feature that some of the other travel tripods have as well but that can come in very handy.

The Brian is available with or without a head. The version with the head–and the version I tested–comes with 3 Legged Thing’s Airhed 3 Ball Head (AH3), which is the heaviest-duty of 3 Legged Thing’s heads. It’s a pretty standard ballhead, with a single large knock to lock the ball. It has a rotating section under the ballhead, and another pano rotator with degree marks immediately under the plate (although it’s not a true panorama head, which is quite a different beast). The plate uses a hybrid Peak Design Arca Swiss compatible release plate, and it comes with the plate. It weighs 12 oz (340g) and is rated for direct downforce loads of up to 440lb or mounting the camera in portrait mode of up to 35lb. Although, again, those load ratings are mostly theoretical and are subject to exactly how the load is applied.

Or you can, of course, buy just the legs and attach your own tripod head if you have another one on hand or just prefer a different head.

It comes with a soft canvas case with shoulder strap, hex tools for making adjustments, a small carabiner clip, and marketing trinkets.

3 Legged Thing likes to market tripods like the Brian as “entirely unique in its design.” That’s getting a little carried away. There are nice touches, but they’re mostly in the details here and there. In basic operation, it works much the same as the other travel tripods out there.

The Brian is well put together and is a good fit for a DSLR or mirrorless setup. It will hold a DSLR with something like a 70-200mm, but there’s no getting away from there being a little give in the legs–it’s a light travel tripod, after all. Good tripod technique helps, and you’ll want to keep it out of the breeze if possible.

For the actual traveling part, it folds up well. I was able to fit it comfortably in the carry-on backpack I used on my most recent trip, a Lowepro Photo Sport BP 300 AW II (review coming soon!). It also fits comfortable in my other carry-on backpacks and the Think Tank Airport International.

While I’m personally not much a fan of the 3 Legged Thing approach to multi-section center columns, there are shooters that will appreciate the extra versatility that it provides.