The Rick is a lightweight carbon fiber travel tripod from 3 Legged Thing. Here’s my hands-on review. 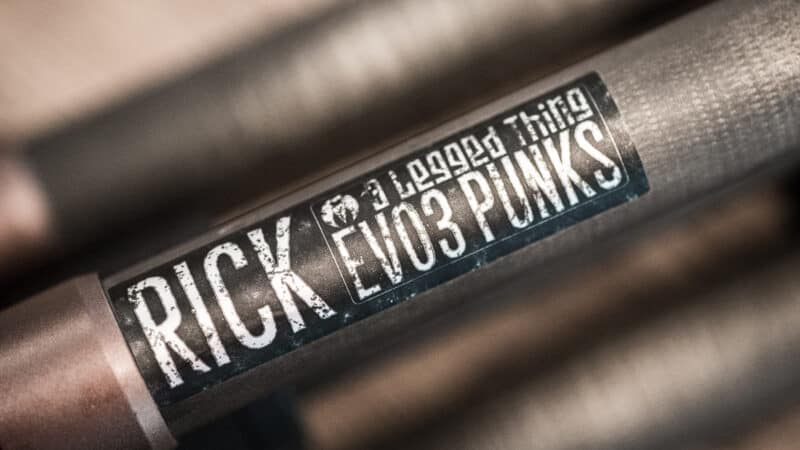 Let’s face it: tripods aren’t the most exciting bit of kit in your bag. Their whole reason for being is to sit there quietly, out of the way, and to sit very, very still. If a tripod gets exciting, chances are, it’s not doing its job properly. Big improvements do happen from time to time, such as the shift to carbon fiber, the introduction of ballheads, and, with travel tripods, Gitzo’s innovation of folding the legs back on itself to make the whole package ultra-compact.

3 Legged Thing is a British company, based in Stagsden, a small village north of London (the tripod is made in China), that’s trying to liven things up a bit by promising a fresh look. The company headquarters are in old chicken sheds on what was once a poultry farm.

The different models are named things like Brian or Vyv. The Rick, which is the one I’m focusing on here, is in their Evolution 3 Punks range, and its legs are carbon fiber. It’s sold with a choice of tripod head: the Mohawk or the Airhead. Both are ballheads; the Mohawk is the better-quality head.

There’s also a magnesium alloy version, the Vyv, which is very similar but does have some differences in its load-bearing weight and height and is a bit cheaper and a shade heavier.

The legs of the Rick extend in five sections, with rotating locking mechanisms. They fold out using a manual ratchet system that isn’t spring-loaded like on the Gitzo Travelers.

The weight that the legs are rated to hold depends on how widely splayed the legs are. They’re rated to hold 22lb (10kg) spread wide at 80°, 33lb (15kg) at 55°, and 44lb standing tall at 23°. Technically, they can hold far more weight if the weight is perfectly over the center of the ballhead, but that’s something that’s rare in practical use.

Locking Mechanism. The leg extensions lock into place with a rotating lock system. The locks themselves are rubberized and grip well. 3 Legged Thing calls these EVO 3 ParaLock, but they’re basically the same as those used by its competitors.

Central Column. Unusually, the central column has two extension parts. The upside of that approach is that it gives some extra height. The downside is that it involves an extra locking mechanism, which is both something else to fiddle with to make sure it’s all locked tight and adds extra bulk to the central column. It also means that even at its lowest setting, the central column extends about 4.5 inches above the top of the legs. As someone who prefers not to extend the central column unless I really have to–extending it increases instability–I’d prefer that the head was lower to the apex of the legs.

At the base of the central column is a plastic loop for clipping on some kind of weight like a camera bag to add stability. And immediately under the head is a plate with three metal loops for straps or tethers. It’s detachable, but if you reattach you’ll need to make sure it’s rotated so that it lines up with the slots for the legs to fold into.

Monopod. One of the features of this tripod is that it can also be a monopod. One of the legs detaches (the one with the branding logo and an orange ring at the top). The center column also slides out, and you can then attach the center column to the detached leg to make a monopod. It’s still a lightweight option and doesn’t give the same kind of stability for big telephoto lenses of a heavier-duty dedicated monopod, but it can be a very handy feature if you’d prefer not to travel with a tripod and separate dedicated monopod. There are a few other tripods in this compact travel category, like the MeFOTO GlobeTrotter, that also have this feature.

Feet. The rubber feet screw off, so they can be replaced with steel spikes or other kinds of screw-in feet or attached to a DIY stand.

The is available bundled with either 3 Legged Thing Airhed Mohawk Ball Head or the standard Airhed Ball Head. The one I tested is the bundle with the higher-quality Mohawk Ball Head, which is made of ADC12 Alloy and weighs about 8.1 oz (230g) by itself or about 9oz (254g) with the supplied plate. It’s the lighter of the two Airhed ball heads that 3 Legged Thing makes, and by itself, it’s rated for an operational load capacity of 81lb (37kg).

The ballhead locks with two knobs, one small one that controls lateral rotation and one large one that locks the ballhead itself. They lock well and are easy to get a good grip on. At the base of the head is a simple dial with degree markings that can be useful for simple panoramas, but it’s not a true panorama head.

It comes with a plate that is 3 Legged Thing’s hybrid Peak Design plate that (model number QR3P), in turn, is designed to be compatible with Arca-type attachments. There are some minor differences with the Peak Design plate, but functionally it’s much the same and is roughly the same size and shape; it also works with the Peak Design Capture Clip system. There’s no safety lock on it to stop it from sliding out, so you need to make sure the dial is done up tight.

There are two bubble levels, one on the top of the legs and another on the head itself, just under the plate.

The Rick comes with an old-school canvas bag that fits quite snugly but easily with the tripod head attached. The case doesn’t have much in the way of padding, and it doesn’t have any exterior pockets for small accessories.

It comes with a 5-year Limited Warranty.

There are some nice touches on this tripod, but they’re incremental differences rather than revolutionary updates (there might be something to the decision to use “Evolution” in the model name rather than the more dramatic “Revolution”).

But in my opinion, it’s too lightweight to offer the kind of stability for DSLRs. It’s really better suited for small micro 4/3 or mirrorless cameras. The bottom two sections of the legs have too much flex in them for my liking when shooting with a DSLR.

It will hold the weight of a DSLR just fine, but it won’t hold it as still as I’d like even with some weight on the central column. If you’re using it with a DSLR or a larger mirrorless system, you’re better off looking at the next model up, the Roger, or some of the other excellent travel tripods that are in this general price category. But if you are using something smaller like a micro 4/3 or mirrorless setup and are trying to keep the tripod weight to a minimum, the Rick is a very good option and well worth a look.

The 3 Legged Thing EVO 3 Rick is available in versions bundled with either the basic Airhed ball head or Mohawk ball head. The version with the Mohawk is a little more expensive, reflecting the better quality of the ball head.