The Burst Mode and Continuous Photo functions on GoPros are useful ways to capture fast-moving action. Here’s a rundown of how they work, how they’re different, and what options are available. 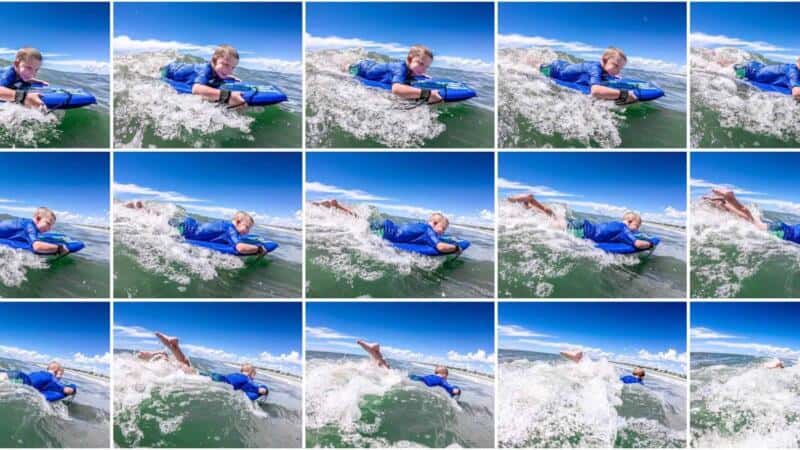 When you’re taking photos with a GoPro, you’ll find that the shutter button is quite sluggish. It’s hard to use it to precisely capture a fleeting moment with a single shot.

But most GoPros have some very useful workarounds built in to combat this–a couple of different ways to capture fast sequences of photos of quick action: Burst Mode and Continuous Photo. These offer a very useful way to maximize your chances of capturing the shot you want when things are moving fast.

These photo shooting modes are quite similar–both are methods for capturing rapid sequences of photos–but there are some key differences with how they work. Specifically, with Burst Mode, the number of photos and the interval are set. With Continuous Photo, the interval is set but you control the number by holding down the shutter button to shoot.

The “normal” way of taking photos is that when you press the shutter it takes one photo. If you want to take another photo, you press the shutter again. That’s not how both of these modes work. They’re multi-shot modes that take a number of images in a certain amount of seconds. Put in video terms, that’s framerate. The fastest still photo framerate currently available on any of the GoPros is 30 photos per second (or 30 fps). The maximum number of photos in any sequence is 30 (but with some cameras, it will keep taking new sequences).

Not every GoPro has both Burst Mode and Continuous Photo, and not every camera that has them has the same options available. You can find more detail below on which GoPro has what burst mode and continuous photo options.

Burst Mode captures a preset number of images in a set amount of time. Put another way, both the number and interval parameters are set. So it might be 30 frames in 1 second or 10 frames in 2 seconds, or whatever you’ve set it to on a particular camera. As an example, if you’ve set the 30/1 option, it will take 30 photos in 1 second and then stop. If you want to take another sequence, you’d press the shutter again.

There is a slight exception with how this works on the newer Black editions, which is the addition of a new Auto option in Burst mode. Basically, this adjusts the framerate to account for exposure. So rather than, say, taking 30 photos in 1 second no matter what, it takes up to 30 photos in 1 second, and if low-light conditions require exposures longer than 1/30 second for a correct exposure, the camera will automatically factor that in an produce fewer images within that 1 second. It’s a little confusing to explain, so I’ve put together some practical examples separately.

Here’s a detailed breakdown of which GoPros have what burst mode framerates available.

The framerates used here are in the form of number of photos/number of seconds. So 30/1 is 30 photos in 1 second and 10/2 is 10 photos in 2 seconds. Put in conventional video framerate terms of frames per second (fps), those would be 30fps and 5fps.

The simplicity of Burst Mode is appealing, but there are situations where it’s not ideal. You can end up with a lot of wasted shots. And the camera is busy while it’s taking its sequence–less of an issue with the faster sequences but more of an issue with the longer, slower ones.

The fields of view available in Burst Mode vary with each camera. Newer models, like the HERO7 Black, you have the option of the processed FOV Linear as well as the standard Wide. Slightly older models give you the options of Wide, Medium, and Narrow. And others only have more limited options such as Wide and Medium available. But in general, you can use the FOVs that are available with regular still photos (those don’t always match up with FOVs available in the Video modes).

On some models, Burst Mode only works with JPG images. You can’t save them as RAW files.

On the HERO10 and HERO9, however, you can use RAW (.gpr) for Burst Mode (but not continuous capture).

How to Shoot Burst Photos

On newer models like the HERO7 cameras, You access the Burst Mode under the regular Photo Mode. On older cameras, it’s under the Multi-Shot Mode section. You can then specify the burst rate and FOV and whether to use Protune (when available on that camera model).

With cameras with voice control, you have two options. To switch to Burst Mode, say “GoPro burst mode.” That changes the mode to Burst Mode, but it doesn’t start taking photos. You can also shoot a burst directly regardless of which mode the camera is in by saying “GoPro shoot burst.”

With Burst Mode, when you hit the shutter button, it will take the set number of photos in the set amount of time. With Continuous Photo, you hold the shutter down for as long as you want to keep capturing (up to 30 photos). That gives you control over when the camera stops shooting, reducing the number of wasted shots and also freeing up the camera to shoot afresh.

Continuous Photo was introduced to GoPros a bit after Burst Mode, but it has still been around for quite a while (since the HERO3 Black).

Here’s a detailed breakdown on which GoPros have what Continuous Photo shooting options.

The framerates used here are in the form of number of photos/seconds. So 30/1 is 30 photos in 1 second and 10/1 is 10 photos in 1 second. Put in conventional video framerate terms of frames per second (fps), those would be 30fps and 10fps, but in this case the result is a sequence of still images.

How to Shoot in Continuous Photo Mode

Put the camera into regular Photo mode (not Burst mode).

Press and hold the shutter.

It doesn’t work with the GoPro mobile app.

Continuous photos only works if you set the image filetype to JPG/Standard before you start shooting the sequence. If you have it set to RAW (.gpr), it only saves a single image and won’t take a rapid sequence.

On the newer camera models, continuous and burst modes are handled a little differently when you’re playing them back on the camera’s screen. They’re treated as sequences, and they’ll auto play. If you hit the delete icon (trash can) it will give you the option of deleting the entire series of just an individual photo.

Continuous Mode only works with the camera’s shutter button. You can’t fire it from the GoPro mobile app–it will just take a single photo.