How to Control Multiple GoPros with a Single Remote

Controlling a single GoPro camera remotely is pretty straightforward. The most obvious way to do that is to use the GoPro mobile app. But what if you want to control more than one camera? For that, you’ll need to use a dedicated remote. Here’s an overview of how it works. 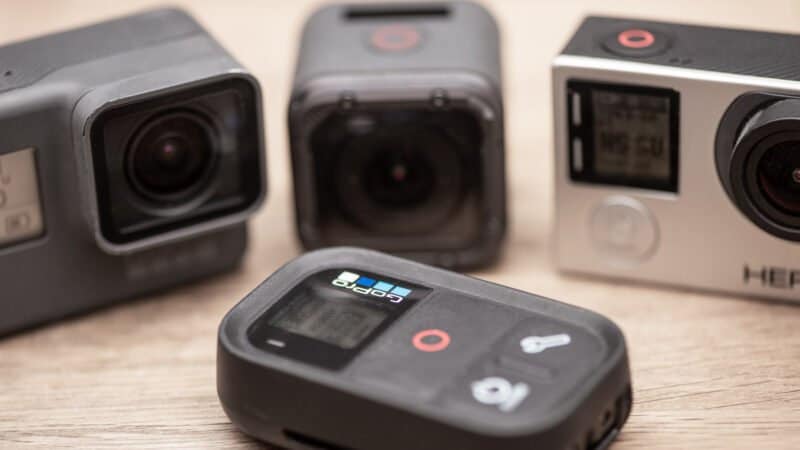 Controlling one GoPro camera remotely is pretty straightforward. The most obvious way to do that is to use the GoPro mobile app. You can also use the GoPro remote, and that offers some benefits over the mobile app (and some cons, too). 1

But what if you want to control more than one camera? For that, you’ll need to use a dedicated remote.

Of the GoPro remotes, only the Smart Remote, the Wifi Remote, and the new The Remote are capable of controlling multiple GoPros at once. But they’re not all equal, and not all of them will work on all cameras. The other methods of remotely controlling GoPros, like using the GoPro mobile app, can only connect to a single camera at once. That includes the GoPro mobile app and the Remo voice-command remote.

The Remote, as it’s called, is the newest of GoPro’s remotes, and it is only compatible (so far) with the HERO10 Black, HERO9 Black, HERO8 Black, and MAX cameras.

It’s waterproof, has a larger, clearer status screen (not a live view screen), and has an improved pairing process over earlier remotes.

If you’re using a HERO7 or earlier camera, the best choice is the Smart Remote. There’s really no reason to hunt down the old Wifi Remote. Of those two remotes, the Smart Remote is newer, more reliable, has better battery life, and has better compatibility with the newer cameras. And the Wifi Remote is discontinued, so it’s not widely available anymore.

You can connect up to 50 GoPro cameras to a single Smart Remote. While most of the recent generations of GoPro have built-in wifi connectivity, not all of the cameras are compatible with the Smart Remote. Some GoPros support wireless connections to the GoPro mobile app but don’t let you pair a dedicated remote with the camera. Some recent examples with that limitation are the HERO7 Silver and White, and the HERO (2018). But so long as the camera supports connecting a dedicated remote control, you can mix and match different models in connections to the same remote. So you can, for instance, connect a GoPro HERO8 Black, a HERO5 Session, and a HERO4 Silver to the same Smart Remote at the same time. Or any other combination of compatible cameras, for that matter. (An important exception to this is when using the 360-degree Fusion and Max models—they can’t be remotely controlled along with other cameras.) You’ll get a status line at the top of the remote’s screen that tells you how many cameras are currently connected.

Pairing the GoPro Cameras with the Smart Remote

The process for pairing the camera to the remote varies between models. Sometimes the process is very similar, such as between the HERO8 Black and the HERO7 Black. But others, like the HERO4 Black and the Session models, use a different process. Rather than lay out each individually here, I’d recommend checking out the how-to guides I’ve put together for specific models:

There’s no bulk way to pair the cameras to the remote–you’ll have to do each individually. So it can be a bit tedious. But as you finish pairing one camera, the remote will give you the option to connect another.

But the good news is that once the remote and camera are paired the first time, it’s much quicker to establish the connection after that.

In general, when you change the shooting mode on the remote, it changes all of the cameras to the same shooting mode. So if you change it to video mode on the remote, for instance, it will switch all of the cameras to the video mode. There’s no way to drill down into the settings further. It will use the options that you have set on the camera for things like resolution, framerate, stabilization, or Protune, for instance. So you’ll need to make sure they’re set up correctly beforehand.

You can’t use the remote to assign different shooting modes to each camera. But there is a workaround that lets you have the cameras using different shooting modes. To have one camera shooting video, another time-lapse, and another burst mode, for instance, all triggered at the same time from the same remote. And that is by using the Default Mode feature. That’s an option you can select in the camera’s settings. It assigns your choice of shooting mode that fires up automatically when the camera powers up. On the Smart Remote, there’s an option to use Default Mode, which will then switch the camera to whatever default mode that’s assigned in that camera’s settings. Again, this is something you’ll want to set up in advance.

You can change the shooting mode via the remote control, but the same changes apply to all the connected cameras. What I mean is that if you set it to video mode, all of the cameras will switch to video mode. You can’t assign one camera to recording video and another to shooting time-lapse, for instance. But there’s a workaround using the Default Mode feature (more on that above).

In general, the responsiveness of the models to remote commands is similar, but it’s not entirely in sync. Having used remote controls with many GoPro models, I’ve found that there’s a bit of a lag between sending the command the camera responding. And different cameras react more quickly than others. So it’s not a reliable way of getting frame-level synchronization.

I’m not aware of an off-the-shelf dedicated synchronization box such as the one Sony has built for the RX0. Timecode Systems make various products that synchronize timecodes on multiple video streams; I haven’t tried any with GoPros. I have seen some custom setups being used, but they’re not off-the-shelf solutions and not something you can go and pick up in a store.

Since I originally wrote this, someone has come out with a mobile app designed to control multiple GoPros using a mobile app (but not the official GoPro mobile app). I haven’t yet tried it, but you can find further details here.

How to Control Multiple GoPros with a Single Remote