How to Remotely Control GoPro Cameras

Here’s a rundown of which GoPro remote to use when, as well as some other options for controlling your GoPro remotely. 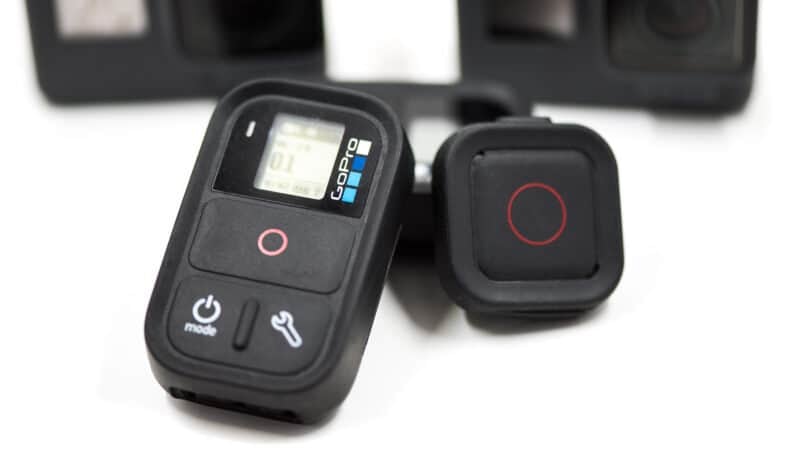 One of the main attractions of GoPros and other action cams is that you can use them in places that most cameras can’t go. But that also means that there are times you’ll probably want to use it without having the camera in your hand. And for that, you’ll want to control your GoPro remotely. There are a number of ways you can do that, each with its own pros and cons for particular situations. So here’s a rundown of how to remotely control your GoPro.

Not all GoPros support these remote controls. The HERO7 Silver and White, for instance, do connect to the mobile app but won’t let you connect a remote control. Same with the HERO (2018). And some older GoPros, in particular, won’t work with the Bluetooth connection or voice commands of the Remo.

GoPro has had four different remotes for their action cameras. Two of them are current models, two is an old model but you can still find it for sale in some places, and each has its own strengths and weaknesses.

(UDPATE: Since I originally posted this, GoPro has discontinued the Remo, leaving The Remote and the Smart Remote as the only current models.)

So here’s a rundown of which remote works for what situations.

First, though, here’s a quick overview of what the three remotes are. Further down the page, I have some alternative ways to control your GoPro remotely.

The Remote is the newest of GoPro’s remotes. It was released for the HERO9 Black, but it also works with the HERO10 Black, HERO8 Black (you might need to update your HERO8’s firmware; compatibility was added with a firmware update), and MAX.

The Smart Remote is, in many ways, the most feature-rich of GoPro’s remote controls. It doesn’t work with voice control, but it does plenty else.

NB: The Smart Remote is not compatible with the HERO10 Black or HERO9 Black. 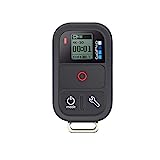 It has a much stronger signal and is effective over a much longer range–GoPro claims up to 600 feet (180 meters) in ideal conditions. While I haven’t tried it that far away, I do find it works better at distance than the Remo. It can control up to 50 GoPros at once. It’s waterproof down to 33 feet (10 meters) (but doesn’t work underwater). And you can change the camera’s settings using the small screen on the remote that mirrors what you’d see on the small front screen on the larger GoPro models. It’s also compatible with nearly all of the GoPro models that have wireless capabilities. That includes the HERO8 Black. An exception is the 360° Max–it’s not compatible.

If you don’t need the voice control of the Remo, the Smart Remote is by far the most powerful and flexible option, and it’s the remote I use most of the time.

You can find them at GoPro.com, Amazon, and B&H Photo.

This remote looks plain but has a trick up its sleeve: it works with the voice control feature in the HERO8, HERO7, HERO6, and HERO5 models. (No, it doesn’t add voice control to older models that don’t have voice control on the camera itself.) 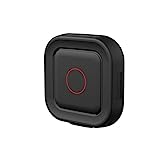 It consists mostly of a single large button (there’s actually second small button on the side that works as a power/pairing button). It’s waterproof (but doesn’t work actually underwater), rated down to 16 feet or 5 meters. In optimum conditions, GoPro claims it has a range of up to 33 feet (10 meters) away. The range is much shorter than the Smart Remote because the Remo connects only via Bluetooth, which has a much shorter effective range than wifi. And it recharges via USB, with a USB-C connector.

Since I originally posted this, GoPro has discontinued the Remo. I’m not particularly surprised, honestly. Several times I ran into reliability issues when using it even just as a button remote with the voice aspect. And based on reports from other users that accumulated online, I’m not the only one. So unless you really need the voice control, I’d recommend steering towards the Smart Remote over the Remo.

But if you need the Remo’s voice-control feature specifically, you still might be able to find it even though it’s discontinued. It’s worth trying at Amazon and B&H Photo.

This model has been discontinued. Even if you do manage to find one for sale, there’s really no reason to choose it over the new The Remote or Smart Remote, and there are some good reasons not to.

Which GoPro Remote to Use When? GoPro The Remote vs Smart Remote vs Wifi Remote vs Remo Remote

If you want to control multiple cameras at once

One thing to watch, though, especially if you’re mixing GoPro models, is that operations like start and stop are close but not exact down to the frame. That is, you can still end up with slight lags from camera to camera when starting and stopping recording.

Another thing I’ve run into is that sometimes some cameras will start while others don’t. It’s frustrating to find later that one or more cameras simply didn’t start recording. So it basically means that you’ve got to visually confirm that they’ve all started recording. But the ability to control multiple cameras at once is still something I find very useful.

If you want to use voice commands

Remo. There’s no competition here. Only one of these remotes offers voice control, and that’s the Remo. It works directly with the voice control in the HERO6 and HERO5 models. And on the HERO5 cameras, it provides a workaround for that camera lacking the Wake on Voice function.

I’m personally a bit ambivalent about the voice control, and especially with the REMO remote. I’ve had too many times when it hasn’t worked as reliably as I’d like it to and I’ve ended up having to work around it. But in those situations where voice control is important, the Remo is the only option for controlling a HERO6 or HERO5 remotely by voice.

I should point out that simply adding a Remo remote to the mix doesn’t add voice control with other GoPro cameras that don’t have their own built-in support for the feature. Put another way, there’s no way to use voice control with a HERO4 Black, for instance, because the HERO4 Black camera doesn’t have voice control support. (Note that although the HERO (2018) has onboard support for voice commands, it doesn’t work with wireless remotes so isn’t compatible with the Remo; the same is true with the HERO7 Silver and White models.)

Which GoPro remotes are waterproof?

But it’s important to know that the wireless signal doesn’t work through water, so while you can get the remote and camera wet and they work in rainy or splashy conditions above water, you won’t be able to use the remote underwater to control the camera. If you need to do that, there are workarounds that involve running a cable to the camera, but they require some setup–I have more on them below.

I’ve found them most useful when doing things like kayaking or surfing, where you’re mostly above the water but getting wet is inevitable.

Other Ways to Control Your GoPro Remotely

There are some other ways to control your GoPro remotely.

GoPro Quik Mobile App. This one is pretty obvious. You can connect your phone or tablet wirelessly to your GoPro for full control over settings and shooting as well as a through-the-lens live preview and playback. You can only connect to one camera at a time, and it’s as waterproof as your phone is. It’s compatible with all GoPros that have wireless capabilities. It’s available free directly from GoPro.

Removu R1+. This is a wireless remote viewer that provides control over the camera as well as a live view of what the camera’s seeing. It’s waterproof, too. There are some compatibility issues with some camera models–it doesn’t work with the HERO5 Session or offer access to the settings on the HERO5 Black or HERO6 Black, for instance–so be sure to check those [PDF] before buying. It’s now discontinued and hard to find.

Underwater Wifi Extension Cable. As you’d guess from the name, this isn’t wireless. But since wireless signals don’t work underwater, this is a way to control your GoPro remotely while it’s fully submerged. There are DIY ways to do this, but CamDo offers an off-the-shelf option. While I haven’t tried this product specifically yet, I’ve used other CamDo products in the past and been very impressed with them.

How to Charge the Smart Remote, WiFi Remote, and Remo

I have a more detailed post on how to charge GoPro remotes, but here’s the quick version.

All of these remotes have built-in rechargeable batteries that aren’t removable. So you need to connect the remote directly to a power source to charge it.

Both the Smart Remote and Wifi Remote use a special charging dock that looks a bit like a key. If you’ve lost that dock, there’s no way to charge the remote–you can’t just plug it in to any USB cable. The good news is that if you have lost it, you can pick it up GoPro remote charger cables as replacement parts from a number of aftermarket manufacturers relatively inexpensively, such as this one. The charging cable uses standard USB to charge, so you can connect it to any of the usual power sources, from wall adapters to USB hubs to power bricks.

With the Remo, it charges using a standard USB-C connection. The Remo doesn’t take advantage of the rapid charging offered by high-output chargers like the Smart Charger.

Images and product information from Amazon PA-API were last updated on 2023-02-02 at 13:08. Product prices and availability are accurate as of the date/time indicated and are subject to change. Any price and availability information displayed on Amazon Site at the time of purchase will apply to the purchase of this product.

22 thoughts on “How to Remotely Control GoPro Cameras”

How to Remotely Control GoPro Cameras