GoPro Wireless Connections – How to Change the Wifi Band Frequency

Some of the newer GoPro cameras allow you to select either 5Ghz or 2.4Ghz wifi bands. Here’s how to do it. 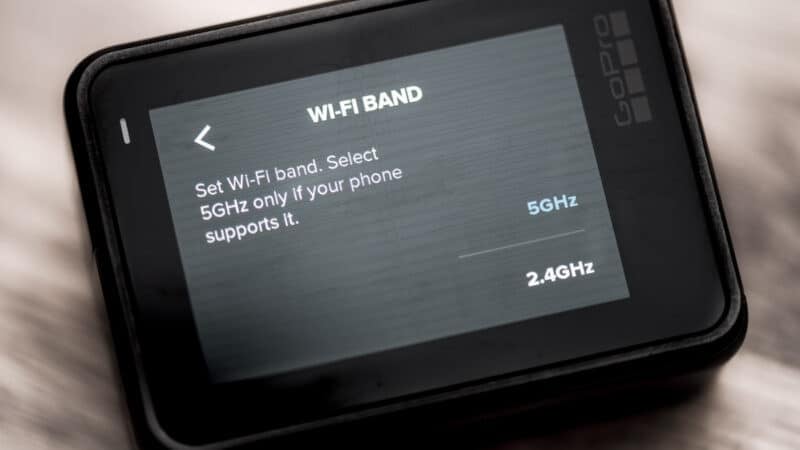 Some of the newer GoPro models allow you to change the wireless connection’s wifi band.

Specifically, this applies to these models:

(NB: The HERO5 Black also has dual-band wifi, but it’s automatic on that camera and doesn’t give you the option to assign one or the other manually.)

There are two main wifi frequencies commonly in use today: 2.4GHz and 5GHz (GHz = gigahertz). If you’re using a relatively new router or phone, it’s mostly a 5GHz device. The 5GHz frequency is newer, less congested, and faster, and it’s what these cameras are set to use by default.

But there are reasons you might want to switch back to the 2.4GHz frequency. While it’s much more crowded, it’s also much more compatible with other devices, including older smartphones and routers. An easy example in GoPro’s own universe of products is that the older GoPro Wifi remote uses 2.4GHz. Overall, there are many more devices that are compatible with 2.4GHz than 5GHz.

That, in turn, can lead to congestion issues on the band, as you might run into interference with anything from baby monitors to wireless routers to garage door openers. That’s not a problem if you’re out in the surf or on a mountain, but it can be an issue in crowded urban areas.

Congestion issues aside, you can potentially get a stronger and more stable connection via 2.4GHz, especially if you’re pushing the distance boundaries or trying to transmit through walls or other physical barriers. The strength of a 5Ghz signal fades quickly as you move away from the broadcast source (eg. a wifi router), which is why many routers and wifi network meshes are designed to silently switch you over to 2.4Ghz when the 5Ghz band reception gets weak. 1

Less commonly, but still conceivable, is that you might be in a location where the 5GHz band is still restricted and not available to use with consumer devices.

How to Switch the GoPro Wifi Band Between 2.4Ghz and 5Ghz.

Switching between the two wifi bands is straightforward. You can find the toggle switch under this menu setting for each camera: