How to Shoot Continuous or Burst Photos on the Nikon D3400

Here’s a rundown of how to use the Nikon’s D3400 continuous mode for shooting rapid bursts of photos.

The Nikon D3400 has a continuous shooting mode. Sometimes known as a burst mode, this allows you to take a rapid sequence of photos in quick succession. It can shoot at up to five frames per second (depending on the shooting settings; more on that below).

It’s especially useful for fast-moving action to help maximize the chances that you’ll get the shot you’re after. So it’s very useful for sports. Or candid family photos of kids who can’t stop moving. Or wildlife on the move.

So here’s a rundown of how to use the Nikon’s D3400 continuous mode.

How to Turn On Continuous Mode

Press the button on the back panel that has an icon that looks like a stack of photos. It’s the button at the left in the photo at the top of this page (and the same button that you use for the D3400’s self-timer.

When you press that, you’ll get the Release Mode screen on the back of the camera. If you haven’t already changed it, it should be on the default setting of Single Frame, like this: 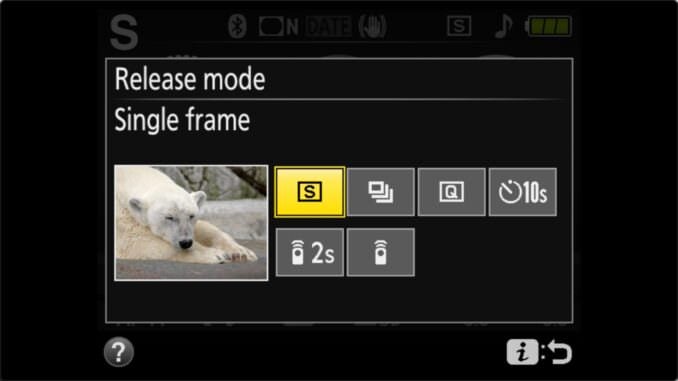 Use the controller to move across to the icon that looks like a stack of photos. That’s the Continuous (or Burst) mode. 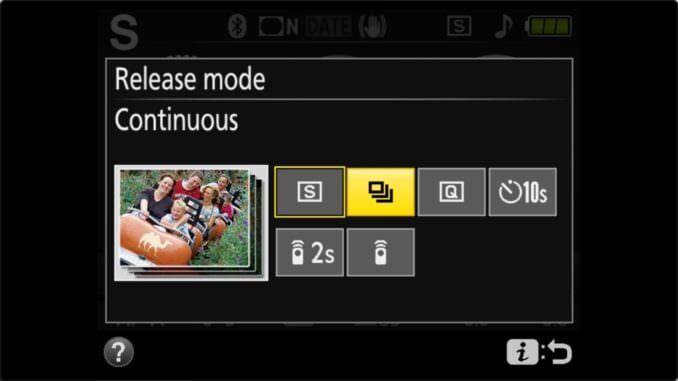 Once enabled, you’ll see a small icon on the main status screen. 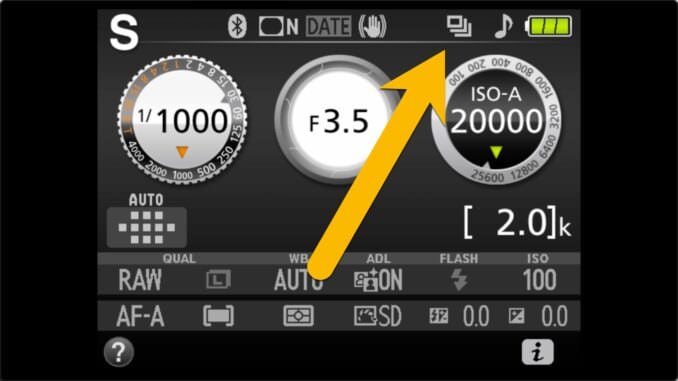 There are no settings you can control; it’s either on or off.

The D3400 has an internal memory buffer. This isn’t storage space that you can access in the usual way–it’s fast memory that the camera can use for temporary storage as it’s waiting for data to be written to the memory card.

And this becomes very important when shooting in continuous/burst mode, because there’s a good chance that the camera is taking photos faster than the camera can write the data to the memory card (all the more reason to get a memory card that’s fast enough for the D3400).

The memory buffer has enough space for up to 100 images at a time, but that’s if you’re shooting JPEG-only. If you’re shooting one of the RAW modes (NEF or NEF + JPEG) then you won’t get anywhere near that many shots before the buffer fills up.

These are the buffer capacity estimates provided by Nikon.

And there are other factors that reduce those even further. If you’re using the in-camera noise reduction, auto distortion control, or date stamp features, the buffer capacity drops.

You can get a real-time sense of how full the memory buffer is through the viewfinder. At the bottom-right, the number starting with R shows an estimate for how many photos can still fit in the memory buffer. It’s updated as images are written from the buffer to the memory card.

The shooting rate depends on the shooting mode you’re using, how full the internal memory buffer is, and whether the battery power is running low.

If battery power is running low, the framerate slows down.

Continuous Mode doesn’t disable automatically. Unlike the behavior of the self-timer mode, once you engage continuous mode, it stays on until you turn it off. It will even remain on if you turn the camera off and on again.

If it’s something you use even semi-regularly, there’s no harm in keeping it engaged. You can still take a single photo–it just means being a bit more careful with how long you hold the shutter down. Then, if you want to shoot multiples, it’s already on, and you can just hold the shutter down.

Continuous Mode doesn’t work with the D3400’s built-in flash. If you have the flash enabled, you won’t be able to select continuous mode. You’ll need to turn the flash off first.

How to Shoot Continuous or Burst Photos on the Nikon D3400