The Bolt VM-210 is a macro light with two light sources on flexible arms. It might look like some kind of bug with two antennas hanging out over the lens, but it’s a very versatile approach to macro lighting. 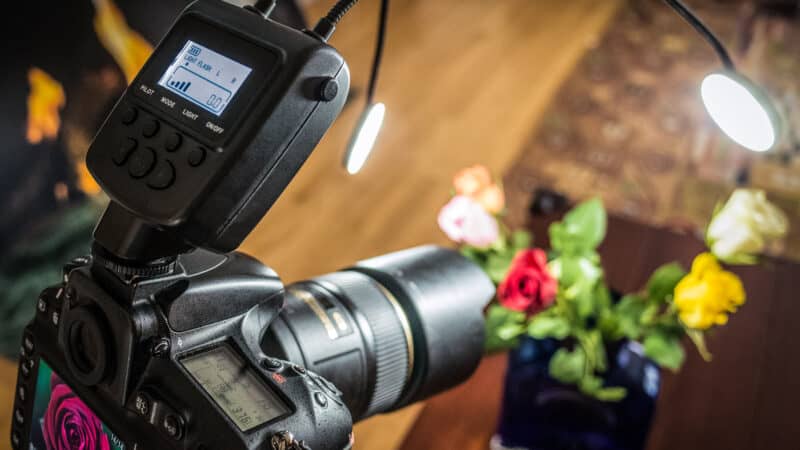 The Bolt VM-210 is a macro light with two light sources on flexible arms. It looks like some kind of bug with two antennas hanging out over the lens. There’s a small, round light pad on each one. It’s an interesting alternative to the more conventional ring-light approach, and the folks at B&H were kind enough to send me one to try out.

It mounts in the camera’s hot shoe. Each of the 12-inch arms is designed to arch out over the lens. Like most portable flashes, it’s powered by four AA batteries. The whole unit is quite light, so it doesn’t pose much of a problem with balance when holding the camera or mounting on a tripod.

The thing that makes this approach attractive is its flexibility. If you want the light pads immediately adjacent to the lens port, a little like a ring light, you can put them there. But you can also shape the light, adjusting the positions and relative distances to control highlights and shadows.

You can control the flash output using the controls on the back of the unit. There you can change the intensity of light (both together–you can’t control each side independently) and switch between flash mode and constant light mode.

Here are some examples. This first one is with both lights on, each about the same distance from the subject.

And just the left light.

Just the right side.

What the Bolt VM-210 Macro Light is Not Good At

There are some things that the Bolt VM-210 Macro Flash isn’t good at that are worth knowing.

For one, and importantly, the output is relatively weak, at least relative to something like a speed light. I’ve found it most useful when used with at least some other light, even if that’s just a bit of ambient light. It can help with increasing the aperture range, but it’s fairly modest with that. If you’re expecting to be able to shoot macros at ƒ/22, you’ll probably find this to be underpowered.

Related to that, it’s only really useful for very close macro shots simply because the light isn’t enough to be useful at farther distances.

For another, the flash is not quick and stays on for a bit rather than the fraction-of-a-second spark from a speedlight. It’s more of an LED turning on and off and is much slower. So it’s not particularly good for freezing action.

And it also doesn’t have TTL for adjusting the flash output in the fly–it’s entirely manual. You can adjust the light output using the controls on the back of the unit, but the controls are essentially more or less rather than tied to something like aperture or even percentage. That is, it works more like an exposure compensation control than a typical flower power control.

I’ve found the VM-210 useful for product shots, especially as a kind of versatile fill-light. It’s really best useful in conjunction with a tripod for the simple reason that its light output is not especially strong. As we head into the spring I’m also looking forward to using it for flower macros like the cherry blossoms where I expect it will be useful for evening shadows.

There are times a more traditional ring light is going to work better, especially if you need more even light. But there’s also a lot of virtue to the shaping you can do with the twin light sources of the VM-210.