The Nikon AF-S 50mm ƒ/1.4G lens comes with a perfectly good lens hood included. But there’s another option I’ve found to work better for me. 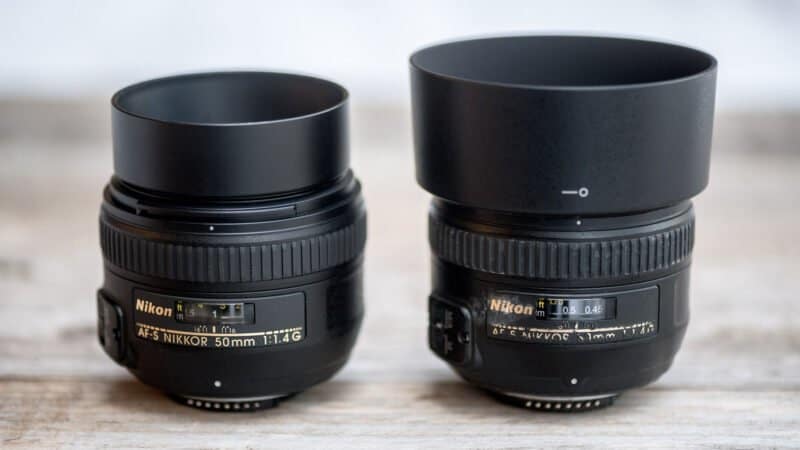 The Nikon AF-S ƒ/1.4G is one of my favorite lenses to shoot with. It’s not fancy–in fact, its flexibility and simplicity are among the main things I like about shooting with it. Sure, it doesn’t hurt that it’s fast and sharp, of course. But I just find it endlessly versatile (you can see some of the photos I’ve taken with it here).

But what I’m focusing on here isn’t the lens’s performance, sharpness, or really anything to do with the photos it produces. This post is about the lens hood for it.

This might seem like a somewhat odd and even obscure topic for a post, but I was reminded of it recently when I had to replace my trusty 50mm. The previous well-used one had developed focusing issues, and it wasn’t cost-effective to repair. So I ended up buying a new one, taking advantage of one of the recent great Black Friday deals.

And while the lens comes with a perfectly acceptable lens hood included, I’ve been using another one for the past few years that I prefer. So I thought it worth sharing, just in case there’s someone out there that finds this useful.

When looking at lens hoods for the Nikon AF-S 50mm ƒ/1.4G, the lens hood that comes included with the lens is the most obvious option. It’s a plastic bayonet-style lens hood.

Its model number is HB-47. And it’s compatible with these lenses:

As usual with lens hoods manufactured by the original lens manufacturer, it’s overpriced to replace as a spare part. But aftermarket manufacturers have filled the gap with alternatives that perform just as well for a much more reasonable price (like this one from Vello). I see no reason to buy the Nikon-branded version when I can get a perfectly good aftermarket alternative for less than 1/4 of the price.

The HB-47 (and its copycats) fits and works well and does what it’s designed to do. Overall, it’s a perfectly good option. But there are some things I don’t like much about it.

For one, it’s plastic–and fairly flimsy plastic, at that. I’ve had plenty of plastic lens hoods on many lenses crack and snap over the years. 1

For another, it comes off too easily for my liking. This is mainly an issue if you’re putting the camera in and out of a camera bag repeatedly, or it’s getting a bit knocked around on location. At least, this is an entirely cylindrical lens hood and it doesn’t matter if it’s slightly off-kilter in its rotation, but it’s still not as secure as I’d prefer. And the plastic clips can also break.

So I prefer a different option. It’s a metal (aluminum) lens hood made by an aftermarket manufacturer JJC.

The model number of mine is LN-58S (although JJC seems to have dropped the model numbers since I bought mine). You can find them on Amazon. 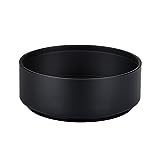 It is not a direct replacement for the HB-47. That is, it’s not just a metal version of the same thing. There are some key differences that may or may not suit what you’re after.

It’s quite a bit smaller than the Nikon original in both depth and outer diameter–you can see them side-by-side in the photo at the top of this page. So it might not be maximizing the blocking of stray light (although the narrower barrel helps). But I’ve found it to work well for keeping both light and rain/spray off the front of the lens.

Rather than clip on, as the HB-47 does, this hood screws into the lens’s filter thread. That means it is a much more secure attachment.

It also has a filter thread etched into the outer end. So you could screw in a 58mm filter to it. But because it’s so far from the lens itself, I can’t think of a good reason to use it myself–it would introduce too many optical issues for my liking. So I don’t use that particular design feature.

Somewhat of a negative of this lens hood is that it doesn’t directly work with the standard Nikon lens cap. Or rather, it doesn’t work quite the usual way. But, oddly enough, you can actually use the lens cap by putting it inside the lens hood’s barrel. Yes, there’s some risk of it getting awkwardly stuck in there, but in practice, I’ve never run into that problem because it’s easy to loosen and pull out because of the cap’s clips.

And, in my day-to-day use, I’ve found that I can get by without using a lens cap most of the time because the hood provides such good protection. But another simple alternative would be to use a stretchy silicone rubber lens cover.

I use the one carrying the JJC brand name, but there are other versions available that presumably work just as well (although I haven’t tested them all to see if they’re identical). 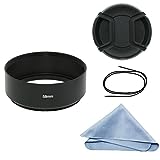 There’s also a version marketed under the Voigtlander brand, but it’s ridiculously overpriced.

Overall, I like this as a rugged and reliable option. It protects the end of the lens from not only stray light and rain but also from knocks and bumps. It would be a bit of a pain if you were adding and removing filters regularly, but that’s not something I do with my 50mm.

There are also versions of this lens hood at other standard filter sizes, such as 77mm or 67mm. Mileage is going to vary on different lenses, because you might run into lens vignetting issues.

You can find the metal lens hoods on Amazon.

Lens Hood. It comes with a lens hood. If you need a replacement, the model number is HB-47. I’ve also written about a metal alternative lens hood I prefer on this lens.

Lens Case. It does come with a soft lens pouch (model CL-1013), but there’s no particular reason you have to stick with the official Nikon one.